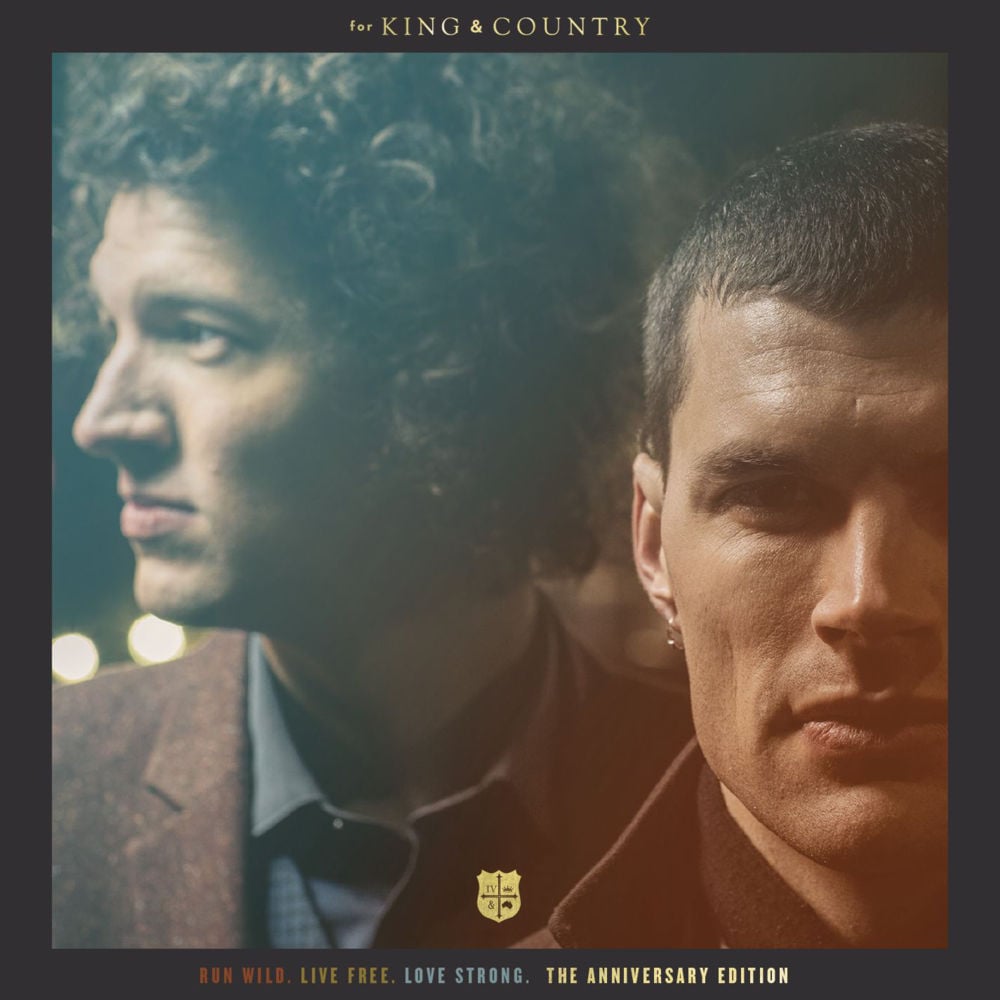 ‘…part of the DNA of for KING & COUNTRY is this idea of respect and honor in relationships and women being priceless. What we’ve both found in our beliefs as men is that people are made equal. No one is a commodity and everyone deserves to be loved and loved well…’ for KING AND COUNTRY. If there was an award for ‘Emerging CCM band of the decade’, these men from down under would certainly receive it hands down; just like how Building 429 would receive it the decade before, and dcTalk (or would it be Newsboys, Jars of Clay or Third Day?) the decade before that. Younger brothers of Rebecca St. James, also a CCM pioneer in the 1990s, Joel and Luke Smallbone of the Aussie duo have paved the way to show listeners, critics and musicians alike what it means to be a successful CCM/pop band and have mainstream success in the process. While never wavering on their stance to share hope from a standpoint of God embodying the very essence of what hope and love are, their new album, a re-release of their highly successful sophomore release Run Wild, Live Free, Love Strong, stretches the tracklisting for a further 3 tracks, while re-recording their current radio single “It’s Not Over Yet” to create a more symphonic sound. One of my favourite albums from 2014, these men, originally from Australia and now residing in Nashville, have embarked on a journey like no other- expect to hear their music in both the Christian and mainstream industry for years to come. From their crossover hit “Fix My Eyes”, to their newly recorded “Priceless”, a song that honours women and reminds us all about how precious they are, in their own lives and in the lives of others; this is an album not to be missed, if you are a fan of good Australian music, their previous material, or even CCM pop. If you love artists like Newsboys, Rebecca St. James, or Press Play, then for KING AND COUNTRY is an artist you don’t want to miss, both now and in the upcoming months ahead.

While much of this album has been heard already by die-hard fans of this Aussie duo, there’s still much of the population at large that are still hearing the singing of both Joel and Luke Smallbone for the very first time. And with one note of “Fix My Eyes”, you can see why this duo is by far one of the most talented bands currently serving within the Contemporary Christian music industry. With hand claps and a message of focussing continuously on Jesus, the Author and perfector of our Faith, “Fix My Eyes” has garnered praise and crossover success, even being charted high on the AC/Pop mainstream charts earlier on during August/September of this year.

“Shoulders”, a hit song that gives us comfort in that God carries us, even our burdens, mistakes, heartaches, heartbreaks, and heartfelt moments, all on His shoulders so we don’t burden ourselves with it all by ourselves, is as much as a standout, maybe even more so, than “Fix My Eyes” on this album, with both Joel and Luke allowing their soulful and soaring melodies to bring the theme of letting go of our troubles to the fore. While the song is primarily based of the famous Bible verse in the Psalms (Psalm 121:2) where David declares that his help comes from God; what we are met with is vulnerability and honestly to chart this song to be one of my favourites from the band ever, since “Middle of Your Heart” in 2012.

“Run Wild”, featuring rapper Andy Mineo, is an encouragement to many who are trying to find identity in things rather than chasing after the truth, living free and to the full as this song suggests we ought to do. Running wild, living free, and loving strong are all attributes that I know I want in my life, and the added rapping verses and freestyle and Andy provides brings to the melody another layer of musical depth that makes this first track stand out even more. Each time a rapper is introduced into a pop driven melody, the song transforms and takes on a whole new different level, and the same can be said about this track too.

“To the Dreamers”, primarily a mainstream song with big drum beats, soaring vocals, and an anthemic atmosphere, was placed in NBC adds all throughout last year’s fall campaign, as the message of dreaming big and to not lose heart in the moments of difficulty was promoted on television. It was nice to see the duo have recognition, especially on a well prominent channel like NBC…here’s hoping a more inspirational melody like “No Turning Back” or “Matter” is played in their promo in the near future?

Both “No Turning Back” and “Matter” each deliver soaring vocals from Joel and Luke and each have been underrated in the standard edition of Run Wild, Live Free, Love Strong, yet sometimes it is the underrated songs that hit hard the most. “No Turning Back” is an anthem ought to be declared by many who long to move on from doubt into trust, from dead to life, never turning back to the ways we lived prior to God taking hold of us; while “Matter” is a song sung to young teenagers, girls in particular, declaring that they matter and are precious in the sight of God. “Long Live” starts off with electronic keyboards and Luke’s distorted vocals as the message of living fully and embracing life in all its facets is achieved, in the empowering lyrics of how we ought to longingly ‘…live the young at heart, you know who you are, with your spirit burning, take a risk and take a chance, carry on…’, and “Already Home” is a timely reminder that we are already home here on Earth, knowing that our home is in Christ, that heaven and eternity can start how with Him.

Current radio single “It’s Not Over Yet” is remastered to present more of a keyboard sound, with its universal theme of us realising that the past, our mistakes, our failures and insecurities are not a determinant of our lives and our future in them, something that makes this song accessible to listeners, maybe even hopefully crossing over to mainstream radio in the future, while both “Keep Me Steady” and “This is Love” are encouragements to many hopeless romantics out there that family, friends, lovers, girlfriends, boyfriends and spouses ought to be treasured, respected and honoured in our lives, especially during a time in society where we as a human race are more focused on the self than others. “O God Forgive Us” is a powerful piano-only prayer of solace as both Luke and Joel offer to us a melody where we’re reminded to always align our hearts towards our Father on a continual basis; yet it is the personal and gut-wrenching, yet equally powerful, empowering and comforting “Without You”, sung with his wife Courtney, that Luke Smallbone delivers with such grace and elegance. With the subject matter of the song being one where she is singing to him, longing for him not to leave as a result of sickness and disease, this personal track based on real events in Luke’s life (Luke had, and still has, a digestive disorder, and was sick to the point of his wife worrying about him even making it through surgeries and other procedures), and is a reminder to us all to treasure life while we still can, and to make most of the moments given by God, with our family, friends and Father right beside us.

“Ceasefire”, “Priceless” and “Wholehearted” and the three new tracks recorded for the anniversary edition of Run Wild, Live Free, Love Strong, and if these three songs are any indication of what the band are capable of in the future, then the best is yet to come for both Joel and Luke. “Wholehearted”, a digital-only track downloadable when you pre-ordered the regular edition, is a song about living life with your whole heart, and to be a person who embraces things wholeheartedly is something of a rare and respectable trait. With both Joel and Luke trading vocals to make this piano prominent track a standout, we see the theme of laying our weapons of war down in “Ceasefire” and the theme of peace and harmony taking the fore. From the first line of the first verse, we are met with vulnerability in the confronting words Luke asserts amidst the laid back piano, that ‘…how do we save a life pointing fingers? How can we end the fight this way? When blame is the truth we’re preaching? And lies are what we’re believing? No one ever wins when the goal is to settle the score…’ Emotive and heartfelt words right? Passion, enthusiasm and proclamation of truth continues to echo in current single “Priceless”, the theme song for the movie of the same name releasing in 2016, of which Joel Smallbone is the lead actor. A song that reminds us that every person is priceless in the sight of the Lord, we see the brothers sing from God’s point of view (or it can be viewed as a man singing to a women) as we know what the Lord sings over us, that ‘…I see you dressed in white, every wrong made right, I see a rose in bloom at the sight of you, oh so priceless, irreplaceable, unmistakable, incomparable, darling, it’s beautiful, I see it all in you…’ With these three songs hopefully being included and being anchors, lyrically and musically, in their forthcoming album (maybe next year?), the duo have outdone themselves, to create some of the most compelling and emotional songs I’ve heard this year so far!

‘…RUN WILD. LIVE FREE. LOVE STRONG.is a statement of reclaiming our birthright as humans, to live a life that is for others, and in that find what it truly means to run wild, live free and love strong…’ If I were to pick a band to listen to if you haven’t heard any Christian band within the last 5 years, I’d pick for KING AND COUNTRY in a heartbeat. With so much passion, zeal, heart, emotion, enthusiasm, and everything else you can think of if you think of the word “vulnerability”; these brothers from down under have worn their heart on their sleeves throughout these 17 tracks. While most of the songs can be heard on their 2014 sophomore album, it is these three aforementioned newly recorded tracks, as well as a remastering of “It’s Not Over Yet”, that continues to assert the album’s relevance to listeners, even a year later. From “Fix My Eyes” to current single “Priceless”, this is a must for any for KING AND COUNTRY music collector, or anyone who loves CCM/pop and wants to hear something different from anything heard on the radio this year thus far. Well done Joel and Luke for such a compelling album. Can’t wait til the next one whenever it releases!

5 songs to listen to: Shoulders, Priceless, No Turning Back, It’s Not Over Yet, Without You