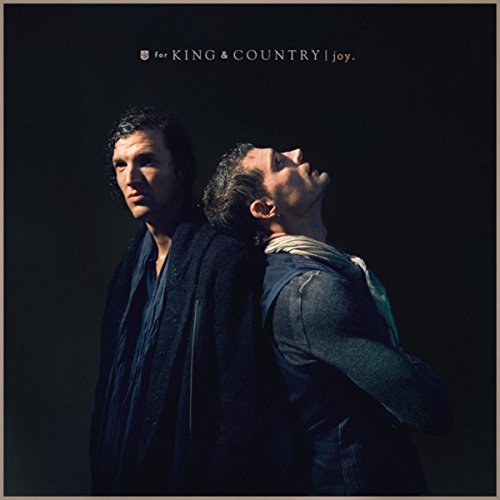 for KING AND COUNTRY have been a household name for quite some time, ever since their chart-topping song ‘Busted Heart’ hit the radio waves all those years ago. Comprised of duo Joel and Luke Smallbone, these younger brothers of fellow CCM songstress Rebecca St. James (who as of now, is currently inactive in music…but you never know, Nichole Nordeman took a break of 10 years, give or take, so there’s still hope Rebecca can still make a ‘comeback’) have taken the media, listeners and the whole general CCM industry by storm since their arrival to Fervent Records back in 2011. Relocating to Nashville in the early 1990s as their father pursued a new career opportunity, for KING AND COUNTRY has been touted many times as the Aussie version of Coldplay- with a focus more on unique instrumentation and anthemic moments of revelation, realisation and just plain powerful songs full of rousing declaration and proclamation. This surmising of both the public and the critics was fairly spot on with the introduction of Crave in 2012, which garnered them success and a Dove Award Nomination in 2013 (for Pop/Contemporary Album of the Year).

Fast forward 5 years and we’ve seen the duo mature and grow into a household name. Songs like “Fix My Eyes”, “Shoulders”, “Middle of Your Heart”, “Proof of Your Love”, “It’s Not Over Yet”, and more recently “Priceless” and “Ceasefire” are just some examples of the songs that the band has shown us, and the calibre of them. The band has managed to show us what it means to succeed in the CCM industry, while still delivering engaging and thoughtful melodies that encourage us to see and look beyond ourselves, as we challenge the status quo and ask ourselves the continuing question- ‘why’ and ‘why should this be if I don’t agree with the way that it is now’? Topics like self worth, identity, the human condition, and man’s relationship with the creator and the created, are some of the messages scattered through these songs, and this is still, and considerably, true of their new single, joy., which released today worldwide on iTunes, Spotify and any other digital service available. The music video for the track also debuted as well on Apple Music, with the 5 minute video a timely reminder of how we ought to seek out joy in all its facets while navigating a world that isn’t as joyful at the moment!

‘…I think we make music for people, so if it makes it to all corners of the earth, great, and if not, then our only responsibility is to make music that is true to who we are. If you can do that, you’ll find that millions of people are going through the same challenges that you are. It’s all about human connection… Two years ago, our record label sat down with us and asked what the next stage of our career is. Honestly, the first word out of our mouths was joy. The next stage is joy. There should be joy and not a flighty sense of it, just stumbling around hoping that that happiness might find me. No, there should be a fight for joy, a very passionate pursuit of joy. So on this upcoming album, which will be 10 songs, there’s a romantic theme throughout and also a lot of spiritual themes. We spent a lot of time writing for the record, but we also wanted it to be concise…’ In a nutshell, this above quote, taken from an exclusive interview that both Joel and Luke had with Billboard, is in fact what ‘joy.’ is about. The song itself isn’t that very ‘religious’ like many songs of the past for the band, and maybe that was intentional. The song and it’s meaning is quite simple- to find the joy that has been given to us in whatever the Lord wants us to find it in. It is for us to open our eyes and consider the wonder and majesty, the awe and interesting, the joyous and fun-filled atmosphere that encompasses joy and what it means to be a joyful Christian in and amongst a time where things aren’t looking too bright. This song, full of life, vigour, passion, heart, and every other positive adjective you can even think of, is one for the history books- never have I been so impacted and floored by a for KING AND COUNTRY song, since ‘Proof of Your Love’ way back in 2012. That’s how emotive and poignant this close-to-four-minute song really is!

If there was an award for ‘Emerging CCM band of the decade’, these men from down under would certainly receive it hands down; just like how Building 429 would receive it the decade before, and dcTalk (or would it be Newsboys, Jars of Clay or Third Day?) the decade before that. Joel and Luke Smallbone of the Aussie duo have continued to pave the way and show listeners, critics and musicians alike what it means to be a successful CCM band and have mainstream success in the process. While never wavering on their stance to share hope from a standpoint of God embodying the very essence of what hope and love are, ‘joy.’ challenges us all to choose joy consciously each day, to actively seek out moments where we ask the question why; and realise that while our own happiness may fade and rise depending on what season of life we are in, our joy is rooted in our identity in Christ Jesus!

If I were to pick a band to listen to if you haven’t heard any Christian band within the last 5 years, I’d pick for KING AND COUNTRY in a heartbeat. With so much passion, zeal, heart, emotion, enthusiasm, and everything else you can think of if you think of the word “vulnerability”; these brothers from down under have worn their heart on their sleeves with “joy.” These brothers have unveiled a song, that while not necessarily in-your-face Christian, is nevertheless a track that gets people thinking about the topic of joy instead of just the here and now. The song is a must for any for KING AND COUNTRY music collector, or anyone who loves CCM/pop and wants to hear something different from anything heard on the radio this year thus far. Well done Joel and Luke for such a compelling song. Can’t wait til album #3 in October 2018!