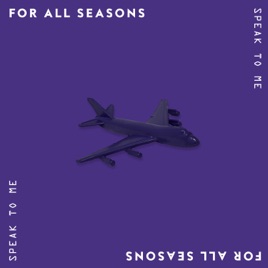 For All Seasons– Speak to Me (Single) (Amazon mp3/iTunes)

For All Seasons has been one of my favourite bands of late, that have debuted as a band within the last 5 years or so. Since the beginning of this year, they’ve been doing a new thing- since signing to Centricity Music (arguably one of the most underrated labels, housing artists like Jason Gray, Andrew Peterson, Lauren Daigle, Jordan Feliz, Unspoken and Plumb, to name a few) and unveiling to us an EP titled Clarity in early 2018, the band is now partnering with patreon to unveil to us one song a month- and at the end of their one-song-a-month project, I’m sure each of the songs will be collated together to form an album. Coupled with a podcast released throughout the weeks as they discuss the heart behind the songs, For All Seasons have delivered to us songs full of enthusiasm and passion (continuing to assert their prominence in today’s CCM/worship music scene), and their new song that dropped digitally today, ‘Speak to Me’ is no different.

‘Every Good Thing’, ‘Light And Momentary’, ‘Friends’ and ‘Just For Today’ are the first four songs available to our listening pleasure- released in January, February, March and April 2019, respectively, and while I won’t really go into the background as to the story behind the one-song-a-month project (I’ll let previous reviews of these songs do that for me!), what I will say is this- each of the songs are focused on a theme that the band want to unpack and uncover. ‘Every Good Thing’ was on the topic, if you will, of seeing, and how we as humans can sometimes see things from a perspective not really fully tuned to what God is really undertaking, while ‘Light And Momentary’ tackled the theme of waiting and longing, delving into the Bible verse of 2 Corinthians 4, where Paul reminds us that though we may have present weakness, that doesn’t compare and ought not take away from the expectation and anticipation of the future glory of Christ set before us. ‘Friends’ ushered into the fore the forgotten topic of loneliness- a topic that we as a human race can often sweep under the rug in an attempt for us to declare that we’re fine, when we know that we aren’t; while their latest released (aside from this new song released today!), ‘Just for Today’, spoke into the realms of friendships and relationships, and how after we get past the loneliness and find a true friend (or friends), we can understand that in such a relationship, there will be ups and downs, and there will be people that can carry the weights and share the burden of our own.

And so here we are today, with song #5, ‘Speak to Me’. The song itself? Speaking about a topic that hardly gets talked about…ever. It is when, not if, we feel far from God and what that feeling may feel like and look like to us who have been a Christian for a while, but at the moment (or we can see someone else going through it), it can feel like God is very far away. Because there are the songs that praise God because He is close, but there aren’t enough songs to express what we could feel if we believe that God is far away, even if we know in our heads and what is in the Word of God, that He isn’t. As Emily Hamilton, lead singer of the band, puts it, ‘…this is often known as a “dry season.” It can seem as if God is so distant, or at least we can’t feel him and his presence seems to be intangible or abstract. This feeling is often a result of us feeling like we can’t hear him speak, so we start to question if we ever have, or if He can hear us when we cry out to him. During seasons like this, it is so necessary to open up about our apathy and numbness, but often we are afraid to. These are the times where we need to acknowledge the void and war against it. There are countless reasons that can contribute to this feeling of distance, which we will unpack more this month. But, our hope is this instead of avoiding or pretending a season like this isn’t our reality, that we would press in further to who God is, own our weakness, and rest in truth…’ Singing about being far away from God is taboo, and a topic that I’m sure no one wants to talk about. Because once we talk about it, judgement always seaps through, often unintended. Is the person a Christian anymore? Were they even a Christian to begin with? How come they are feeling like this- didn’t they do ____ enough? All these questions will come at the person who shares their heart and is vulnerable, and this is definitely one of the reasons why people don’t share their vulnerabilities and uncertainties- because of such judgement, often from people within the church and the person’s church family!

Co-written with singer-songwriter and all around artist who is arguably one of the most vulnerable there is, Audrey Assad; ‘Speak to Me’ is a song full of longing and moments of soul-exposing, but also a song that can give hope to others that it is ok to express doubts and share that you do feel far from God, sometimes. It is in a sense of real and honest community that we can share our deepest without condemnation- we just need to surround ourselves with people we know aren’t going to judge us, but also aren’t going to let us wallow, and challenge us in our own thinking about life as well. So as I go about my upcoming week, I am certain to continue to play this song on repeat- it’s actually one of my favourites from the band this year, alongside ‘Friends’. If the next few songs continue to go the route of these last few from the band, then this new album, when it culminates at the end of year, is going to be one of 2019’s best. As so as I finish my review/musings, let me finish by adding a quote by the band from their recent Instagram post about relationships and the importance of them in the way that they form the safe space needed to be vulnerable in first place. Well done For All Seasons for such a powerful and emotive song, can’t wait for the next one that drops at the end of June 2019!

Relationships are hard. People are complicated. And, most times it’s easiest to just walk away and give up on one another. But, don’t do it. Press in to the strange and beautiful thing called community. It’s part of God’s design, and we find healing, encouragement, support & connection when we don’t give up so easily on the people around us. As we say in the song, it can be a straight up MESS you’re entering into with others. But, the mess is worth it. There is a lie going around the hearts of man that says honesty and vulnerability will always be met with blank stares and disgusted faces, and it’s just not true. To those who have faced betrayal and hurt, we are so sorry. Don’t let that brokenness rob you from future friendships. Stay open to God healing and leading, because He wants to surround you with others who will encourage you, laugh with you, and cry with you. You are not disqualified. You are not too broken…You are not alone. Community is God’s perfect design so run to it and not away from it.