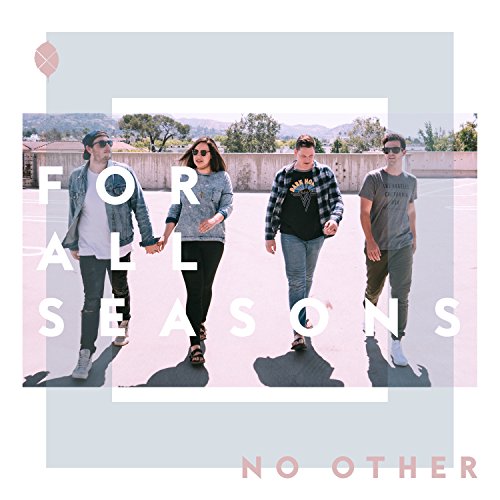 For All Seasons– No Other (Single) (iTunes/Amazon mp3)

Yep, you guessed it, another For All Seasons song, another review. I think the band is going to release one song per month leading up to their Clarity EP release in January 2018… so I guess one review per month for For All Seasons… then again, I don’t have to, but upon hearing this worship song, I figured I had to review it. Fast becoming one of my favourite songs of the year thus far (yes, even better than ‘Higher’ and ‘Bigger Than’), this newly recorded track from lead singer Emily Hamilton and the rest of the band is an anthem for many as they hear it. But let’s back-track for anyone who doesn’t know much about the band. In a nutshell- For All Seasons have been one of my favourite up and coming bands over the last year or so, as this relatively new quartet from California rose to prominence and significance through their 2013 album High Above It All– which spawned the powerful radio hit “High Above It All” (of which Phillips, Craig and Dean covered on their 2014 album Above It All). Since that album, after three years and two more ‘live-in-studio’ EP’s, the band signed to Centricity Music. And while at face value the band may seem like any other worship movement that is popular at the moment (think Jesus Culture meets Desperation Band meets Hillsong and you can probably guess what the band sound like), For All Seasons nevertheless deliver songs full of enthusiasm and passion- the band continues to assert their prominence in today’s CCM/worship music scene with their new track, ‘No Other’.

‘…so, I love this song because this is our flagship. This song wasn’t supposed to be on the record, and it kind of came out of nowhere, a miracle-type song…’ ‘…when you talk about the name of Jesus, that is the most powerful name you could speak. And I know times in my life where something feels so overwhelming or so beyond my control, the only thing that brings peace or the only thing that settles things down is to speak the name of Jesus…’ These two above quotes, the first by Randy Charlson (guitars) and the second by Jeff Luckley (guitarist) are, in a nutshell, what ‘No Other’ is about. Originally not going to be on the project at all, this song, co-written with Ed Cash (famous for collaborating a lot with singer/worship leader Chris Tomlin), shows us a theme of declaring God to be the one who is high above anything else, that there is no other name higher than that of Jesus. A song to declare fervently on a Sunday morning as part of the church service, For All Seasons have facilitated what I reckon is one of my favourite worship songs I’ve heard this year, alongside ‘Honestly’ (The City Harmonic) and ‘Death Was Arrested’ (North Point InsideOut).

At a tad under 4 minutes, this song is fit and primed for radio, as Emily pours out her passion for presenting the relevance for the gospel, even now, believing that ‘…no other name carries the power to save, crushes the power of the grave, but Jesus…’ Jesus and Jesus alone has the power to create things new from things broken, as we are met with a moment of realisation and revelation as this song can hopefully facilitate such a breakthrough in many who hear the poignancy of the words in the song. You can tell when an artist is enthusiastic about what they are singing, and Emily Hamilton is one such artist. If this is how Clarity is going to be, with the introduction of ‘Higher’, ‘Bigger Than’ and then ‘No Other’, then Clarity will be one of my favourite EP’s to release in 2018!

‘…in all honesty, writing songs for church worship is not our goal. Getting songs played on the radio is not our goal. We absolutely love the church and we love the purpose of radio, but our goal is a little more simple: to write authentically, passionately, and creatively, from our own stories, in hopes that those who hear our music connect with Jesus on a deeper level and chose to seek Him in every season of life. That’s our focus. However and wherever God wants to use it? That’s His decision…’ This above quote by guitarist Jeff Luckey is the premise and purpose behind For All Seasons, and is something bands and solo artists ought to think about before they go up on stage. It is a reminder to always seek the Lord first in whatever we undertake, that whatever come is a direct result of our fervent and enthusiastic obedience to whatever the Lord has in our way to undertake at various circumstances in our lives. ‘No Other’ is a reminder that the Lord is always there regardless, and that alone ought to be a message worth celebrating for!

For All Seasons and their influence in CCM is certain to increase in the upcoming months ahead with the release of ‘No Other’, ‘Higher’ and ‘Bigger Than’. That is a bold claim, but what I can I say more about the band that I haven’t said already? They’re up and coming, a young band that are talented, and on fire for Jesus, worshippers that give their all in whatever song they sing, be it original or worship covers. A great job well done for a group that I reckon could become the next Jesus Culture or Hillsong in a few years; I am sitting eagerly anticipating their debut Centricity Music EP Clarity in January 2018. Well done to Emily and the band for such a soul-stirring song. ‘No Other’ is a track that anyone who is a fan of worship music can listen to and enjoy.