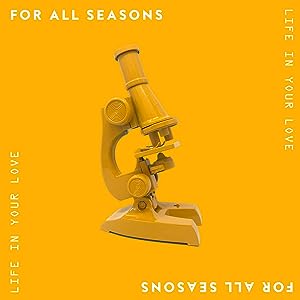 For All Seasons – Life in Your Love (Single) (Amazon mp3/iTunes)

If you have been perusing this website for a while, then you’d know about the band For All Seasons. One of my favourite bands of late, that have formed within the last 5 years or so; the band have undertaken a new thing as of 2019. Since signing to Centricity Music (arguably one of the most underrated labels, housing artists like Jason Gray, Andrew Peterson, Lauren Daigle, Jordan Feliz, Unspoken and Plumb, to name a few) and unveiling to us an EP titled Clarity in early 2018, the band is now partnering with patreon to unveil to us one song a month- and at the end of their one-song-a-month project, I’m sure each of the songs will be collated together to form an album. Coupled with a podcast released throughout the weeks as they discuss the heart behind the songs, For All Seasons have delivered to us songs full of enthusiasm and passion (continuing to assert their prominence in today’s CCM/worship music scene), and their new song that dropped digitally on Friday is no different.

‘Every Good Thing’, ‘Light And Momentary’, ‘Friends’, ‘Just For Today’ and ‘Speak to Me’ are the singles from the band that have released digitally this year, and each of them speak about a different topic or theme- that the band want to unpack and uncover. ‘Every Good Thing’ was on the topic, if you will, of seeing, and how we as humans can sometimes see things from a perspective not really fully tuned to what God is really undertaking, while ‘Light And Momentary’ tackled the theme of waiting and longing, delving into the Bible verse of 2 Corinthians 4, where Paul reminds us that though we may have present weakness, that doesn’t compare and ought not take away from the expectation and anticipation of the future glory of Christ set before us. ‘Friends’ ushered into the fore the forgotten topic of loneliness- a topic that we as a human race can often sweep under the rug in an attempt for us to declare that we’re fine, when we know that we aren’t; while their April music offering ‘Just for Today’, spoke into the realms of friendships and relationships, and how after we get past the loneliness and find a true friend (or friends), we can understand that in such a relationship, there will be ups and downs, and there will be people that can carry the weights and share the burden of our own. ‘Speak to Me’ is the final song unveiled by the band (prior to ‘Life in Your Love’), with its theme about the taboo topic of singing about God being far away from us- once we talk about feeling far away from God,  judgement always seaps through, often unintended. Is the person a Christian anymore? Were they even a Christian to begin with? How come they are feeling like this- didn’t they do ____ enough? All these questions will come at the person who shares their heart and is vulnerable, and this is definitely one of the reasons why people don’t share their vulnerabilities and uncertainties- because of such judgement, often from people within the church and the person’s church family!

Now here we are in June (July where I am in Australia). The 6th song (I presume it’s 12, because there’s 12 months of this year!) has just released, and this time, the theme of the song is that of feeling near to God in a sense of having intimacy with Him through either prayer, worship, communication, or just talking to Him on a daily basis. With the song being juxtaposed with ‘Speak to Me’ of May and how that song was about how we can sometimes feel far away from God and what that ought to look like in terms of a song; ‘Life in Your Love’ is all about the opposite- how a song would be and look like if we are close to God as if we are close to our spouse. For earthly love is just a mirror and reflection to how much more the love God has for us, and thus, a closeness to God, on an intimate level, is one that has to be cultivated, grown and sought after; like how a normal close earthly relationship should be. As Emily, lead singer, invites us to understand through an Instagram post of the song and where the song came from, ‘…this season of feeling near to God goes hand in hand with last month’s theme. Our lives are constantly bouncing back and forth from moments where we feel like there is a deep distance between us and God, to moments where we feel His presence and see His hand so clearly. The whole goal of this year is to remember that He is worthy of worship in BOTH of those places…’

God is present and moving in both the times of when we feel God close, alongside when we may not feel Him at all. But here’s there, impacting our lives and the lives of others, maybe even before we realise it is happening. This song is very upbeat and jovial, a song to jam to in someone’s car on a long drive. Compared to the sombre moment of last month’s track, I reckon the tempo of the two last songs (‘Speak to Me’ and ‘Life in Your Love’) are resemblant of what people could be feeling on the outside…yet tempo and feelings aside, both these songs convey a similar truth- that God is with us and affecting lives and culture so much more than we can ever dream or even comprehend. It is when we understand that God doesn’t leave us, even if we can perceive that He does because of outside circumstances, then we can truly believe into the fact that the season we are in, be it good or bad, is just that- a season. A moment in time that will change, but what we believe in and the root of that, based off the Word of God and not on any other superficial feeling, is what should be the basis of our grounding of belief, and how to be in communion with God and to be intimate with Him on a level that is seen and present between family, is when we truly grasp that He never leaves us…ever. So as we go about our weeks, let us remember this fact- that God loves us and always brings things together, be it initially harmful or hopeful, to shape and mould us into people He wants us to become- resilient, encouraging, hopeful, and loving individuals whose beliefs and steady and firm. Well done For All Seasons, for this catchy, yet equally emotive song. Can’t wait to see what the months of July – December will deliver- maybe this new ‘album’ will be one of my favourites come year’s end!

Often, in Christian circles, we hear the phrase “intimacy with God”. It’s one of those expressions that sounds a little strange or foreign to people who don’t live life WITH God. In simplest terms, intimacy with God means we have “close familiarity or friendship” with Him. And that all begins with recognizing that He is NEAR to us. You can’t build a friendship or strong relationship without actually being in close vicinity to someone. You learn their character, grow to recognize their voice in a crowded room, and build a deep sense of trust. The trust we build with God through intimacy with Him is anchored in the fact that He DOES NOT LEAVE. His presence is WITH us. We see it best in Psalm 139: “Where shall I go from your Spirit? Or where shall I flee from your presence? If I ascend to heaven, you are there! If I make my bed in Sheol, you are there! If I take the wings of the morning and dwell in the uttermost parts of the sea, even there your hand shall lead me, and your right hand hold me.” (Psalm 139: 7-10) There is no where we can go that His presence doesn’t follow. So, press in. Remember that He is close. Learn His voice, like a sheep to their shepherd. And experience the freedom and life that we find in His love.