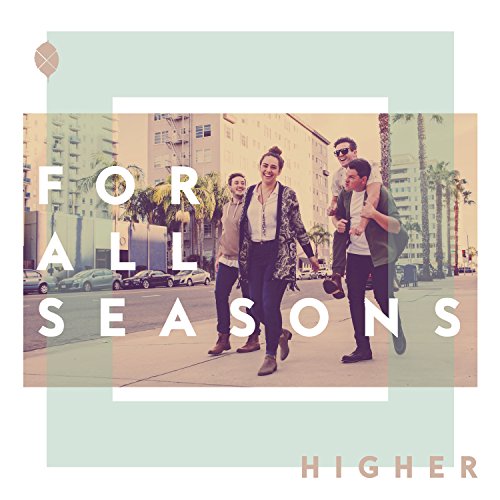 For All Seasons– Higher (iTunes/Amazon mp3)

For All Seasons have been one of my favourite up and coming bands over the last year or so since Everfound and About a Mile a while back. A relatively new quartet band from California, For All Seasons rose to prominence with their 2013 live album High Above It All, which spawned the powerful radio hit “High Above It All” (of which Phillips, Craig and Dean covered on their 2014 album Above It All). Fast-forward three years, and two ‘live’ sessions EP’s later, we see For All Seasons offering us another taste of what is to come- with their label debut song, ‘Higher’- the band have signed to Centricity Music, home to artists like North Point InsideOut, Grayson Reed, JJ Weeks Band, Jason Gray, Andrew Peterson, Carrollton and Jordan Feliz to name a few. While the band may seem on the surface like any other worship movement that is popular at the moment (think Jesus Culture meets Desperation Band meets Hillsong and you can probably guess what the band sound like), For All Seasons nevertheless deliver a song full of enthusiasm and passion- the band continues to assert their prominence in today’s CCM/worship music scene with ‘Higher’. This new song which is the first radio single from their forthcoming project on Centricity Music, is one of the most honest, heartfelt and enjoyable pop songs I’ve heard this year since ‘Unfinished’ from Mandisa- which is certainly saying something of the songwriting and calibre of the quartet. While the band have been independent for quite some time, their partnership with Centricity Music from now onward is a good fit- as the quartet offer to us a musically inventive song that gives us courage and encouragement, that God’s ways are so much more expansive than ours, that we can rest assured that He has everything in control, even if we may believe He doesn’t, only for that moment!

‘…so often when it comes to interacting with people who are not following God, my instincts want to immediately tell them that they’re wrong and I’m tempted to build up walls rather than follow the example Jesus set in Scripture. He tells His disciples that the world will know that they are His followers by the way they love people. It’s not gonna be by the way they argue or point out people’s mistakes. In the world we’re living in, surrounded by different belief systems and brokenness, God is asking us to trust that His way of interacting with the lost is better than the way my human heart wants to deal with it. As we look at His example, we’re challenged to re-evaluate the way we treat the people we disagree with…’ This above aforementioned quote is, in a nutshell, what this new song ‘Higher’ is about- that God’s ways are higher than our ways, and what He has in store for not only our lives but for the lives of others. We are reminded through lead singer Emily Hamilton and the rest of the band that what we may not understand in the here and now are things we may just need to trust the Lord with- because what He is painting and the tapestry He is creating is far more beautiful and amazing than we can ever realise, believe or even think about. Starting off with a strong drum beat and Emily’s passionate vocals a la Abbie Parker from I AM THEY, the song gives us a sense of realisation and encouragement, that ‘…You remain in control with a steady hand, even when the lies of this life start to make sense, so be my guiding light, when things aren’t black and white, I’ll trust in who You are…’ What a powerful truth to believe and step into, that God is our guiding light and whom we ought to run after and emulate, that He is the One whom we should place our trust into rather than the things of this world that scream at us left, right and centre. What a much-needed (albeit cliché- but still needed in this society nonetheless) message that we hear in ‘Higher’- quite possibly one of my favourite songs throughout the whole of 2017 thus far- alongside ‘Even If’ (MercyMe), ‘The Sound of Surviving’ (Nichole Nordeman), ‘Honestly’ (The City Harmonic) and ‘Shadow Step’ (Hillsong UNITED).

With such raw passion and honesty, lead singer Emily gives us a hopeful and encouraging message in ‘Higher’, that when everything is stripped away, God’s ways are far beyond ours, and that we ought to trust Him in every aspect, even if it doesn’t make any sense to us at that moment. He is indeed high above it all, and this message ought not to be taken lightly. With a soaring drum beat and a vocal of Emily’s similar to that of Katie Torwalt, Jenn Johnson or Kim Walker-Smith; For All Seasons and their influence in CCM is certain to increase in the upcoming months ahead. That is a bold claim, but what I can I say more about the band that I haven’t said already? They’re up and coming, a young band that are talented, and on fire for Jesus, worshippers that give their all in whatever song they sing, be it original or worship covers. A great job well done for a group that I reckon could become the next Jesus Culture or Hillsong in a few years; I am sitting eagerly anticipating their debut Centricity Music album whenever it releases. Well done to Emily and the band for such a soul-stirring song. ‘Higher’ is a track that anyone who is a fan of worship music can listen to and enjoy.

3 songs to listen to: Higher, Higher, Higher…no seriously, listen to the song 3 times, this group is fast becoming one of my favourite indie-worship bands of late