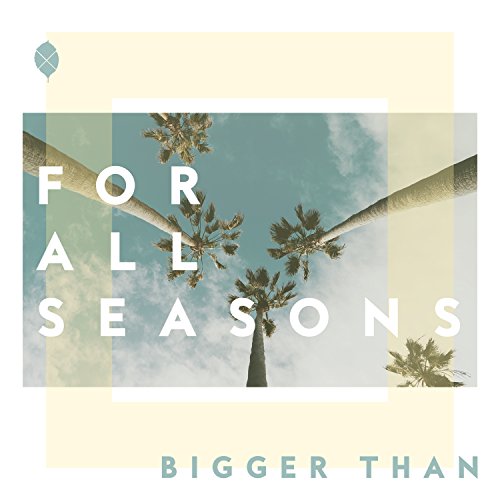 For All Seasons– Bigger Than (Single) (iTunes/Amazon mp3)

Another month, another song by For All Seasons (after their first radio single under Centricity Music, ‘Higher’). But for those who are late to the party and are only just discovering now this great band, let’s recap a bit. For All Seasons have been one of my favourite up and coming bands over the last year or so, as this relatively new quartet from California rose to prominence and significance through their 2013 album High Above It All– which spawned the powerful radio hit “High Above It All” (of which Phillips, Craig and Dean covered on their 2014 album Above It All). Since that album, we have seen the band grow through leaps and bounds, as after three years and two more ‘live-in-studio’ EP’s, the band signed to Centricity Music, home to artists like Jason Gray, Lauren Daigle, Jordan Feliz, Grayson Reed, Jonny Diaz and North Point InsideOut to name a few. While the band may seem on the surface like any other worship movement that is popular at the moment (think Jesus Culture meets Desperation Band meets Hillsong and you can probably guess what the band sound like), For All Seasons nevertheless deliver songs full of enthusiasm and passion- the band continues to assert their prominence in today’s CCM/worship music scene with their new track, ‘Bigger Than’.

‘…I started to realize I had really been navigated by fear for a majority of my life. It was fear of disapproval, fear of death, fear of change, of what my future might hold…and God was so gracious to help me understand that instead of putting all my focus on those things, all He was asking me to do was to put put my focus on Him and just choose to trust Him. Because He is bigger than anything I could be afraid of, and He has already proven through the cross and through the resurrection that He’s overcome anything I could be afraid of…’ ‘…He’s also bigger than our dreams. That’s a line that’s really spoken to me, and I think that line speaks to our identity as a group too. I remember when we first got started, someone sitting us down and saying ‘What’s your 10-year plan?,’ and we just had the hardest time trying to plan that out. I think when you’re faithfully seeking the Lord every day and relying on Him to provide for you and direct you, all you can really do is be obedient to what’s in front of you and the doors that He opens. And all the time, His plans and His dreams for us are so much bigger than ours. It reminds me of that verse—’Seek first His kingdom and His righteousness and all these things will be added to you,’ because He knows what we need more than we do, and so our response is just to trust Him…’ These two above quotes, the first by Emily Hamilton (lead singer) and the second by Jeff Luckley (guitarist) are, in a nutshell, what ‘Bigger Than’ is about. Originally released on their Live Sessions Vol. 2 EP last year, ‘Bigger Than’ was one of my favourite songs of 2016, and continues to be a song on repeat as I reckon this song is one of my favourite worship songs by an indie artist…maybe even ever (even though they are currently on Centricity Music, they wrote and recorded the song when they were unsigned)! That’s how powerful I reckon this song is.

Standing at a duration of 4:25 (with a plethora of electronic keyboards and drums), Emily Hamilton oozes out vocal similarities to artists like Kim Walker-Smith and Natalie Grant, as “Bigger Than” presents a theme of God’s grand nature to listeners, all the while encouraging us all to rest in Him, because He is ‘…bigger than all my fears, God of love, God my love, You are bigger than all my dreams, God my hope, God my peace, whatever will come my way, through each day I will say, God I trust You…’ An anthem to be declared again and again in its own right, “Bigger Than” has a great melody as the lyrics challenge us to look bigger beyond ourselves as we seek comfort in a God who is big, yet still intimate with each of us. It is a song to declare when everything is going well, but also a song to declare also when things aren’t looking that good, also. A song to sing in all seasons in life, ‘Bigger Than’ continues on from ‘Higher’ in the theme of how the Lord is sovereign over all, all the while taking notice of us and investing in our lives personally. He is bigger than everything, yes, but also still longing to be close to us all, in whatever aspect of our lives we are in now!

For All Seasons and their influence in CCM is certain to increase in the upcoming months ahead with the release of both ‘Higher’ and ‘Bigger Than’. That is a bold claim, but what I can I say more about the band that I haven’t said already? They’re up and coming, a young band that are talented, and on fire for Jesus, worshippers that give their all in whatever song they sing, be it original or worship covers. A great job well done for a group that I reckon could become the next Jesus Culture or Hillsong in a few years; I am sitting eagerly anticipating their debut Centricity Music EP Clarity in January 2018. Well done to Emily and the band for such a soul-stirring song. ‘Bigger Than’ is a track that anyone who is a fan of worship music can listen to and enjoy.