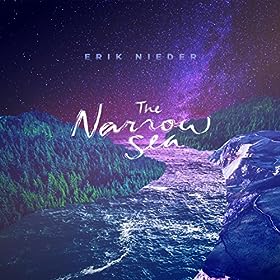 Upon the back of a stellar album Valley of the Shadow, indie singer/songwriter/worship leader Erik Nieder is back with another EP release, The Narrow Sea. One of the most underrated artists ever in 2015, Erik has been a great find in a year full of great independent album releases. One of my favourite ‘new’ artists (I say new because it was Valley of the Shadow that placed Erik and his music on the map, even though he released an album prior, in 2013), it was Erik’s song “Dead Man Walking” that has garnered success over the last few months, in the form of a recording by Fair Trader Services artist John Tibbs on his debut album of the same name. With a vocal reminding me of artists like Jars of Clay, Jadon Lavik, Tenth Avenue North and Phil Wickham, fans of these aforementioned artists will thoroughly enjoy Erik’s songwriting and singing style. As Erik enlightens us as to who influenced him towards the path of music, we are reminded of the power of a song and what it means to listeners who hear the music. Even if we may not know the story of John Newton and his dramatic change from slave trader to advocate of the gospel of Christ, we are nevertheless still encouraged by his story (google it and see for yourself the story that has impacted millions around the globe in their own quests for comfort and forgiveness). As Erik specifies himself, ‘…His testimony exemplifies the power of music. A power that, when coupled with the Word of God, has infinite possibilities. And the fact that hundreds of years later we still turn to Newton’s wisdom, in times of trial and in times of triumph, is proof that a song really can change the world. So when people ask me, “Why music? Why songwriting?” Well, that’s why. Because nothing can perform soul surgery quite like a song can. And no one can heal a heart quite like Jesus can…’ With virtually every song on The Narrow Sea having a hymn-like feel (that creates more of a universal appeal that touches listeners who are fans of worship music, hymns and everything else in between), The Narrow Sea is a healing and comforting set of five tracks, and an EP certain to be one of my favourite EP’s of 2016 when December rolls around in 10 months time!

Erik has a unique way of transforming many of his songs he has recorded into songs that could’ve and would’ve easily fit in a hymn-book. While people may say that this style of writing music may seem a little less contemporary and less energising than other songs by artists like Bethel Music, Chris Tomlin and the like, I say that Erik’s ability to create hymn-like melodies again and again is a skill in and of itself, and this is no different on The Narrow Sea. “Adore”, the first song on the EP and the first single from this set of songs, is as enjoyable as it is poignant. With a light acoustic guitar introduction, and a soothing voice that makes Erik one of most enjoyable voices to listen to of late, we are brought into the message of us resting at the feet of Jesus, at the water’s edge where we declare that ‘…You’re all I have, and all I need, wash over me with perfect peace, I will adore You, be still before You, eternal king, Jesus, my everything, I will adore You…’ Simple lyrics in that there is nothing theologically grand or flash, the song is still one that we can reflect upon, and really soak into the facts- do we really believe what we are singing about? The beauty of Erik’s songs is the acoustic nature of primarily most of them, thereby us concentrating on the lyrics rather than the messiness sometimes of the layering instruments that could often detract from the overall message. “Adore” is an example where the lyrics hit hard for me, and hopefully other listeners as well.

“For Heaven’s Sake” is another heartfelt song about giving up our lives for Christ, as we focus more so on what Erik is singing rather than the theatrics of songs that seemingly come across Air1 and K-Love all the time. Not that I don’t love the songs played on those two stations, it’s just that these songs on Adore (and on Valley of the Shadow for that matter) have a sense of raw honesty and realness that seem to be lacking in anything else I’ve heard for a while (the last time I’ve felt so challenged and compelled by a group of songs were Building 429’s Unashamed and Lauren Daigle’s How Can It Be). “For Heaven’s Sake” is no different. With a light piano undertone, Erik places on his Phil Wickham meets Jadon Lavik hat as we are compelled to believe and act upon the poignant words of how we need to ‘…let the words I speak and every breath I breathe, tell the story of the mercy I’ve been shown…’ With some of the most confronting words I’ve ever had to deal with in a while (in what was the shortest track on the EP), Erik continues to encourage, challenge, wow and wonder.

“There’s a River” employs a gospel choir and a melody that could’ve fit right in beside “When the Saints” or “Down to the River to Pray”, as Erik sings in the manner of Mike Donehey to present to us a passion that is very much needed in the industry currently. The message of singing without anything holding us back, declaring our faith without any consequences, is emphasised, not only in this track, but throughout the EP as a while. “When Grace Called My Name”, originally recorded on his debut album Secret of a Burning Heart, is given a reimagining, delivering a much needed contemporary sound as Erik gives us a reminder of what happened to us all on that day when we accepted Christ’s grace to us- ‘…I’ll open my eyes, to the glorious sight of the Saviour who took my place, and You’ll rescue my life from the darkness of night, when grace calls my name…’ Something to celebrate isn’t it? “O Rock Eternal” is the final track on the EP, and with layering vocals that create an auditorium feel, Erik delivers a unique technique and a hymn-like rhyme as this song presents a firm message, that God is our rock in every season of life. It is the chorus especially that is cleverly written by Erik, a chorus that easily asserts my belief that Erik is by far one of my favourite hymn-like writers of this generation. Who knows, in a few years’ time, he could be considered a modern hymn writer? Or maybe even now?

What have I said about Erik and his music that I haven’t said already? That The Narrow Sea is my favourite EP of the year? That Erik is by far one of my favourite independent artists I’ve heard since Lara Landon’s music back in 2014? Fans of Tenth Avenue North and Jars of Clay are sure to love The Narrow Sea, as will lovers of artists like Phil Wickham and Jadon Lavik. From current single “Adore” to the hymn-like “O Rock Eternal” and the ever poignant “For Heaven’s Sake”; this is a collection of songs full of heart and soul. A worship leader destined to be part of the next generation of worship songs in months and even years to come, well done Erik for such a prolific and defining EP. My favourite EP since Paul Colman’s Recalculating, Erik is sure to be on the radar of music executives and record labels in the upcoming months! Kudos to Erik, looking forward to the next full-length album whenever it comes!