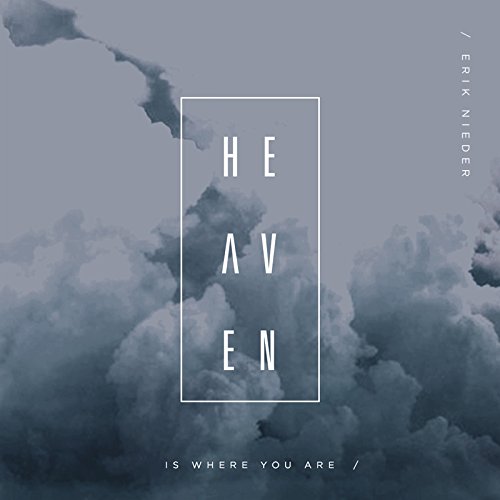 Erik Nieder– Heaven is Where You Are – Single (iTunes/Amazon mp3)

Upon the back of a stellar album Valley of the Shadow (in 2015) and The Narrow Sea (in 2016), indie singer/songwriter/worship leader Erik Nieder released 2 powerful and emotive singles to iTunes in the form of ‘Faithful’ and ‘My Hope Secure’, both becoming some of my favourite worship songs that I heard in 2017. One of the most underrated artists ever, and I mean ever, it was in 2015 that Erik released one of his career defining hits in ‘Dead Man Walking’, which was picked up and re-recorded by John Tibbs, who was previously on Fair Trade Services and is now releasing music independently. With a vocal reminding me of artists like Jars of Clay, Jadon Lavik, Tenth Avenue North and Phil Wickham, fans of these aforementioned artists will thoroughly enjoy Erik’s songwriting and singing style. And with every song on The Narrow Sea, Valley of the Shadow, as well as his new songs ‘Faithful’ and ‘My Hope Secure’ having a hymn-like feel (that creates more of a universal appeal that touches listeners who are fans of worship music, hymns and everything else in between), I can safely say that Erik Nieder is a songwriter that has the ability to create modern hymns with anything that he writes, and I know that is a bold assertion but one listen to a variety of songs in his musical catalogue and you’ll understand. What Erik has is a gift and an art, and his new song ‘Heaven is Where You Are’, which dropped digitally earlier this month, is nothing different. Erik’s music, be it his new song or songs and albums gone by, is unique- many of his songs he has recorded could easily fit in a hymn-book, that’s the quality of his music! And while people may say that this style of writing music may seem a little less contemporary and less energising than other songs by artists like Bethel Music, Chris Tomlin and the like, I say that Erik’s ability to create hymn-like melodies again and again is a skill in and of itself. ‘Heaven is Where You Are’ is yet another hymn, which is fine by me. It is Erik’s unique ability that sets him apart in a good way. Does this new song by Erik inspire me in such a way that many of his songs have over the years? Yes, and yes, even though much of the music of the track is resemblant of ‘Made’, also written by Erik which was on his 2015 album Valley of the Shadow!

And so we have a new song from Erik- ‘Heaven is Where You Are’. Immediately when I heard this song, I thought of ‘Made’, a song also by Erik that was recorded and placed on Valley of the Shadow released in 2015. Is it really plagiarism if the music on ‘Heaven is Where You Are’ is very, very similar to ‘Made’ a few years ago? Maybe, maybe not. But what I will say is this- this song will certainly fit right alongside many modern worship songs of today in a Sunday morning worship setlist. But need I remind you that this song is written by Erik Nieder, and not written by…anyone else. A song like this, even if it feels very much like a song that could receive much success in many churches around the world in the months to come, will it in the end? We don’t know. Erik may not be as popular as many other singer-songwriters/worship artists, but he does have a unique way of presenting such themes that can be easily heard without much interference from heavy guitars and modern music that can often distract from the lyrics that are easily as meaningful as the music currently.

As for the song itself and its messages-  we are met with a song that reminds us all that the heaven we so long for that is in the future when we die and be with the Lord…it starts now, with the Lord at this moment. We don’t have to wait to the afterlife to live fully as God has intended for us to live. Sure we’ll still have our hang-ups and things we struggle with, but if we are in communion with our Father and abide in Him, why can’t we live like heaven has invaded earth, because frankly, heaven is indeed wherever Jesus is, and He is here with us, at this moment, where we’re at. With light keyboards and Erik’s trademark ethereal voice that seems to be a cross between Jadon Lavik and Mike Donehey of Tenth Avenue North, Erik and his music, especially this new song, is a must listen if you enjoy similar worshipful artists that don’t necessarily dwell in the long-winded worship songs, nor do they release edgy worship music, but nevertheless present songs with lyrical prowess. Erik is such an artist like this!

‘Heaven is Where You Are’, alongside ‘My Hope Secure’ and ‘Faithful’, is one of my favourite Erik Nieder songs, ever! Maybe, just maybe, there’s a full length album lurking around the corner- and so with songs previously that have had a similar impact to this new song- from ‘Adore’ and ‘The Rock Eternal’, to ‘For Heaven’s Sake’, ‘Dead Man Walking’ and more recently ‘My Hope Secure’; Erik at his most is full of heart and soul. A worship leader destined to be part of the next generation of worship songs in months and even years to come, well done Erik for such a prolific and defining song that is a standout in the last few months. Erik is sure to be on the radar of music executives and record labels in the upcoming months (that’s if he wants to be signed)- but even if he doesn’t and still stays independent, his music will still have the power to reach far and wide!