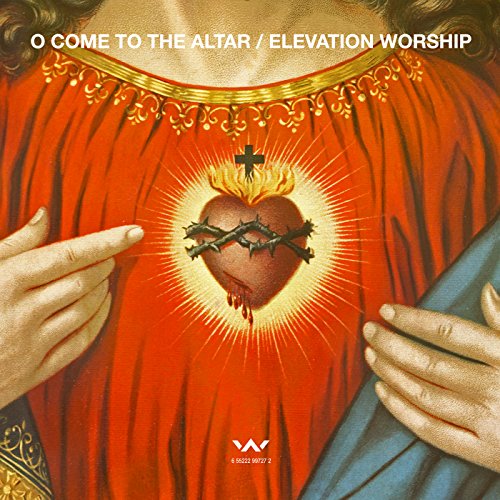 Elevation Worship is a relatively new-ish band/worship movement/group/whatever you want to call worship groups nowadays…when compared to others like Passion, Hillsong Worship, Jesus Culture and Bethel Music. Even though Elevation Worship, a worship collective arm of Elevation Church, have been creating worship albums and songs since late last decade, it has only been from ‘O Come to the Altar’ onward that people have started to take notice of this group. Not that they weren’t popular before, quite the contrary. The group have been making music for years, even putting out a double disc collection of worship songs (I think that the album was called Nothing is Wasted) that has been and to this day, is one of my favourite worship albums of that year (I think it was 2013). But it is this recording of ‘O Come to the Altar’ from their live album recording Here as in Heaven in 2016 that have really placed them on the map. So much so that on the heels of success of Here as in Heaven, as well as their 2017 album There is a Cloud, Elevation Worship have released an EP highlighting what I reckon is their most popular and impacting song they’ve ever recorded (well, except for ‘Give Me Faith’!)- ‘O Come To The Altar’.

In fact, it is an EP full of the same song done differently- the original live recording, an instrumental version, a radio edit, an acoustic rendition as well as a Spanish Version as well. So what does this song have so as to create a whole EP on it? What makes the song so special that it appears on WOW Hits 2018, when it probably was one of the most least popular songs (as far as songs on the radio) all of 2017? In fact, when I hear the track in its entirety, 5 times, I am reminded of how poignant, heartfelt and emotive the song really is, and how it is a reminder for us to come as we are to the altar of where sin and death, transgressions and hopelessness is buried, where everything that is not of God comes together and is laid at the feet of Jesus so that we can be made in a new and different light. ‘O Come to the Altar’, a modern day prayer/hymn if you will, will hopefully encourage us all to undertake such a task, that all we have to do is to bring ourselves with all our hangups, screw-ups, difficulties and uncertainties, and declare alongside the band, to ‘…come to the altar, the Father’s arms are open wide, forgiveness was bought with the precious blood of Jesus Christ…’ And while there’s been quite a few songs that speak about Jesus’s blood being spilled for us (‘At the Cross’- Chris Tomlin, ‘Jesus’ Blood’- Delirious? to name a few), what is special about ‘O Come to the Altar’ is the ability for us all to use it as a corporate worship song, to be reminded often on a Sunday morning of how raw and real the transaction was when Jesus was on the cross for all mankind. Elevation Worship have presented a song that is as emotive and effective in a live setting as it is acoustically, in Spanish, or without any words. While for me I only heard this song this year, hearing ‘O Come to the Altar’ as well as ‘Give Me Faith’ previously has encouraged myself to check out the band’s previous musical catalogue at my own pace.

And that is that- 5 songs of ‘O Come to the Altar’ to make us realise that such a song as this is equally as emotive and heartfelt as it is very much needed in a society like this one we’re in at the moment. We are in troubling times, and Elevation Worship has given us a song to worship to as we come to the altar of God as we are, transformed and encouraged in our own walk with the Lord in the process. And while Elevation Worship frankly haven’t been as popular as many other bands (except ‘Give Me Faith’), expect it all to change with the introduction of ‘O Come to the Altar’. Well done Elevation Worship for this song, one of my favourites and a surprise (a welcomed one) on WOW Hits 2017. Maybe a song like ‘Resurrecting’ on WOW Hits 2019?