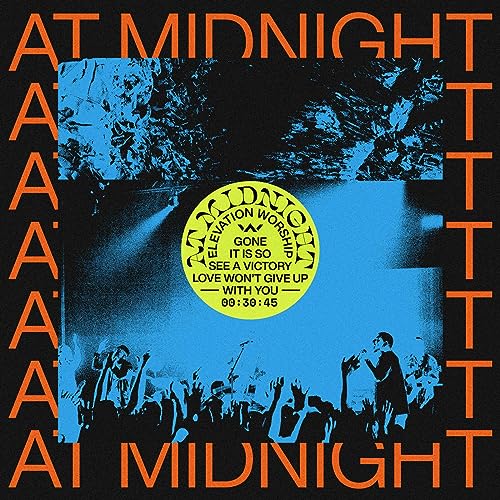 Does it seem like I’m being lazy in not writing an intro, not just for this review of Elevation Worship’s At Midnight EP, but for their Spanish release too? Perhaps. But personally, it just doesn’t bode well when all that needs to be said for an artist has been said already. Usually that’s a good thing, as with the saying that we’re ‘lost for words’, but with the case of this release, saying the ‘same’ thing in my introduction is me making a point. That no matter how great of an album Hallelujah Here Below is, the group was always going to struggle when both Mack Brock and London Gatch left to pursue solo careers. That’s a fact that can’t be sliced up to sound better than it does. And with this EP, I am left wanting. Not because it’s only 5 songs long, but because there seems to be a cohesiveness lacking in the tracks. You may feel differently, but let me quickly voice my thoughts.

Opening track “Gone” is admirable in its message and somewhat enjoyable musically, however the ‘woahs’ are way too distracting, and the chorus is way to repetitive. As we are presented with the notion that we’re going to live like our chains are gone, and that our sin is gone, I’m reminded by the more superior track “Amazing Grace (My Chains Are Gone)” by Chris Tomlin. “Gone” by Elevation Worship doesn’t even register in my brain unfortunately, and after 10 minutes of me listening to this song, I’ve completely forgotten the track. Which is unfortunate as these guys can do better. “It Is So”, a contemplative piano led ballad and one of the better songs on this EP, still can be improved upon, as the track duration is way too long, and reminds me of Planetshakers’ ballads, which often start off with good intentions, but along the way somehow gets lost. Lyrically this track is strong, as we are reminded that ‘…by Your stripes, I am healed, with one touch I am made whole, You have spoken, and I know that it is so…’, but close to 6 minutes is quite long isn’t it? “See A Victory”, though catchy, is way, way, way too repetitive all over for its own good; as is “Love Won’t Give Up On Me”, which speaks about God’s love not giving up on us (which is fine by all accounts) yet still contains similar themes to much more impacting songs like “Love Won’t Let Me Down” (Y&F), “Promises” (Sanctus Real) and “Never Giving Up On You” (Matthew Parker). Sadly, “With You” ends the EP on a whimper. On its own it’s an alright song, but it’s way too long, and as a EP closer sounds far too lullaby-ish. Sorry guys, I don’t mean to write a negative review, but I cannot write a positive review for this release, so…here we are.

While the band is still on the rise, and many songs from Hallelujah Here Below expected to propel Elevation Worship to even greater heights than “O Come To The Altar”, “Do It Again” and “Resurrecting”; it seems that the group are doing just fine without Mack and London. But along comes their ‘sophomore slump’ (2nd live album without Mack and London!). Sure they will miss these guys because of their experience and the worship leading ability, however we must have faith in the newer guys that Jesus would guide their steps in respect to leading people in worship just like in this album. This release is a hiccup, however perhaps the next full album may be sounding like something completely different and let us hope and pray that the awesome music that was present in Hallelujah Here Below continues. Paradoxology was great, but we all want another live album! Bring on the next full-length album sometime this year/early next year!

3 songs to listen to: It Is So, See A Victory, With You