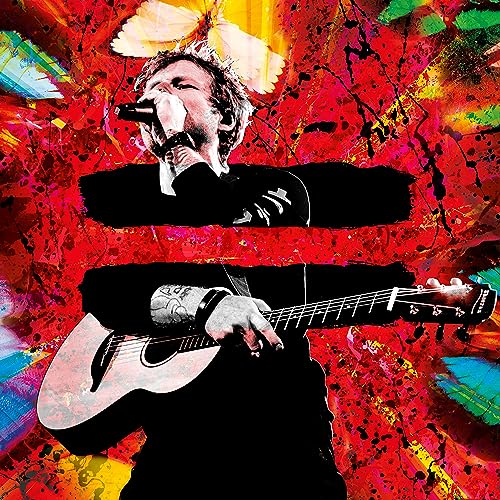 One of the most respected, popular, influential, powerful, encouraging, honest, vulnerable, and emotional artists I’ve heard in a long time… is British pop singer/songwriter Ed Sheeran. We blogged about Ed a few years ago, and all of the positive things Jon had to say about Ed, his music and his song writing, still ring true today. Ed’s brand of pop isn’t like the pop you hear on the radio today; and though he is a mainstream artist, I find myself resonating with his music probably even more so than some of the CCM artists that I’ve been listening to for a longer time. Ed has a way with words and with the acoustic guitar and with the piano- when you listen to an Ed Sheeran song, you can’t help but feel emotive and inspired and encouraged and comforted; and his brilliant prowess as a singer and as a songwriter is probably as big as it has ever been right now, and as never more so on display I reckon, than in his most recent album =. Pronounced ‘equals’, = was reviewed by Jon here… and again I agree with everything that he has said and mentioned about Ed and his songs. Songs like “Overpass Graffiti”, “Tides”, “The Joker And The Queen”, “Visiting Hours”, “Leave Your Life” and “Stop The Rain”, are all songs that are highlights and are songs which are impactful, compelling, and thought-provoking. While “Bad Habits” to me is still the lone ‘mis-step’ of the album… so 13 good songs and 1 mediocre one isn’t that bad. Now fast forward to now, and Ed has unveiled a deluxe edition of =, called = (Tour Edition). Standing tall at 23 tracks, Ed has added an additional 9 songs, and has enhanced his album to more stratospheric heights. I didn’t think that = could be improved upon… but it has. Let me tell you my friends- this is how you make a deluxe edition album. Ed Sheeran has the template, and not Jeremy Camp; so there you go!

Ed Sheeran has been a busy, busy guy since we blogged about him and since we reviewed his most recent album. Just take a look at how many “2Step” remixes he has released- thankfully, there’s only one remix on this deluxe edition album. And he has somehow managed to enhance his latest album with 9 new songs- why don’t we give him a round of applause? “Afterglow”, a haunting, sedate and reflective acoustic guitar ballad about Ed’s wife Cherry Seaborn, is a beautiful melody about the pureness and the innocence of love, and the fact that Ed wants to hold his love near to him all the rest of the days of his life; while the enthralling and transfixing acoustic guitar mid-tempo ballad “One Life” is taken from the end credits of the 2019 film Yesterday, and is a song where Ed exquisitely and vibrantly describes the moment he proposed to his now-wife. It’s one of the deluxe edition album highlights, and it’s a breath of fresh air to hear a song about love that is probably Ed’s best since “Perfect”; while “Penguins”, another song from Yesterday, speaks about a doomed love in which both people decide to still give their love a go despite signs around them point to it failing.

“I Will Remember You”, a heartbreaking, emotional melody that vividly describes the feelings of loss and pain that Ed has had towards an ex passing away, reminds us all that we ought to not take this world for granted, as we don’t know how much time we have left; while the inspiring and powerful “Welcome To The World” is directed to Ed’s youngest daughter, with the song having been written and recorded while Cherry was still pregnant. It’s an incredibly personal song to Ed and is a melody that I’m sure will resonate with a lot of people. Remixes of “The Joker & The Queen” (with Taylor Swift), “2Step” (with Lil Baby) and “Bad Habits” (with Bring Me The Horizon) follow, while Ed contributes a verse to a remix of Nigerian singer Fireboy DML’s song “Peru”- and each of these melodies impress and bring the level of = (Tour Edition) to even greater heights.

Ed Sheeran’s song-writing and inspiring lyrics and heartfelt vocals ensure that he is a star at the moment and that his best work is yet to come. = (Tour Edition) confirms Ed’s greatness amongst other British artists like Phil Collins, Robbie Williams, Coldplay, The Beatles, David Bowie, Sting and George Michael to name a few. = is an album that was one of the best in 2021, and = (Tour Edition) reminds us that at the moment, Ed can do no wrong. Well done Ed for setting the bar high once again! I can’t wait to hear what’s next! Perhaps a Christmas album?

6 songs to listen to: Visiting Hours, Leave Your Life, Tides, The Joker & The Queen (feat. Taylor Swift), One Life, Welcome To The World