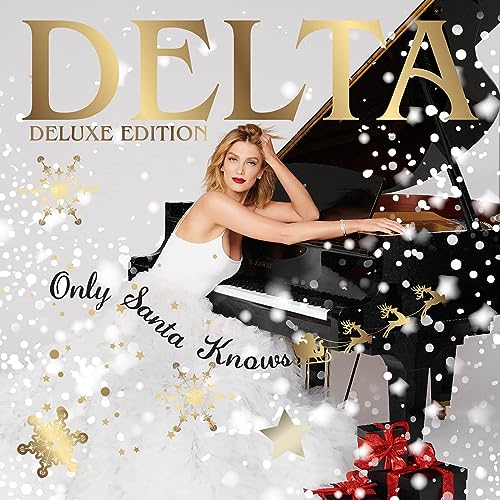 Delta Goodrem has fast become one of my favourite Australian artists ever. Having become synonymous with Australian culture for quite some time, her impact and influence on Australian music is huge, and as I’ve been listening to her music throughout the years (more so on a regular basis ever since her 2016 album Wings of the World); I’ve been noticing this one thing- that God doesn’t really care what type of music He uses for people to understand more about themselves and more about Him in the process- if He chooses to convey His love for creation through a Skillet song, a Chris Tomlin song or even a Delta Goodrem song, then who are we, mere humans, to question anything that He does? Delta’s music has been encouraging, impactful, and dare I say, God-breathed at times- her songs like ‘Born to Try’, ‘Believe Again’, ‘In this Life’, ‘Enough’, ‘Sitting on Top of the World’, ‘Mistaken Identity’, ‘Together We are One’, and more recently, songs like ‘Let it Rain’ and ‘Keep Climbing’; are all testaments of the inspirational influence that Delta has in her music, even possibly without knowing it herself. As I’ve continued to embark along the road of understanding that ‘mainstream’ music isn’t as ‘bad’ or ‘evil’ as I was even led to believe, I find myself being more open to whatever the Lord has in store for me- be it a worship song, a hard rock song, or even a song from an Aussie artist, that can deliver similar punches and remind us all of our desperate need for something bigger than ourselves to sustain us in this life that we lead.

Enter in Delta Goodrem, who I can boldly say I am a fan of. Her new album Bridge Over Troubled Dreams released May 14th 2021 (the review of it can be viewed here); and predating the album release, Delta unveiled to us 5 pre-release tracks- ‘Keep Climbing’, ‘Paralyzed’ and ‘Solid Gold’ all released in 2020, and ‘Billionaire’ and ‘All of My Friends’ came out earlier in 2021. And as I have said time and time again this last year, I’ve come to realise, that if we limit the music in which we believe God can speak to us through, then we really don’t know God and what He really can do…I know, controversial to some, but it’s the truth. And I’m understanding more and more each day, that the God who raised Jesus from the grave, is the same God who can speak through a music genre, or a music style, that may be different from what we as Christians are used to. And maybe, just maybe, that’s ok.

For songs can bear the message and meaning of one thing, and when someone hears it, they can attach their own personal meaning to it too. Which is the beauty of why music is such a universal language and a great avenue and vessel to be used by the Lord to speak to people in various different walks of life. Only Santa Knows, Delta’s first Christmas album, released last year on November 12th digitally and November 13th physically, (with the review of it here), and now a year on from her chart-topping Christmas album that has taken all of Australia by storm (maybe even as impactful to Aussies, as Michael Buble’s Christmas album is impactful to Canadians, or Mariah Carey’s Merry Christmas is impactful to Americans), Delta’s releasing a deluxe edition to Only Santa Knows– expanding the track list from 13 to 17 with the addition of the songs ‘Frosty the Snowman’, ‘Sleigh Ride’, ‘Christmas (Baby Please Come Home)’ and ‘Jingle Bell Rock’.

I reviewed Only Santa Knows in December last year, and the review of it can be seen here, and so this ‘review’ of the deluxe edition would be ‘short’, but still nevertheless warranted and needed. Because the deluxe edition of Only Santa Knows is just as emotive and poignant as the original, maybe even more so. ‘Christmas (Baby Please Come Home)’ is a song where the persona is wishing and hoping that their loved ones come home for Christmas, stating that their houses are all decked out for Christmas, and that the only thing missing is their friend. A song that reminds us all to always cherish family this Christmas and holiday season, Delta continues her affiliation with reindeer, snowmen, winter and jingle bell cheer with the trio of songs ‘Frosty the Snowman’, ‘Sleigh Ride’ and ‘Jingle Bell Rock’. Though these three songs don’t necessarily deviate from their original counterparts, these cover versions by Delta are still something to be behold of, as we see arguably one of Australia’s most impactful and meaningful artists, place her own spin on Christmas classics- it is these four additions that actually places Only Santa Knows (all 17 of the songs) in the running to be one of the most heartfelt, compelling, and complete, Christmas albums in all of Christmas music memory- up there with Josh Groban’s Noel, Mariah Carey’s Merry Christmas, Michael Buble’s Christmas, Casting Crowns’ Peace on Earth, Steven Curtis Chapman’s Christmas is All In the Heart, and of course, anything from Pentatonix (the kings and queens of Christmas music, period!). These four additional songs add substantially to the celebratory mood already conveyed through the rest of Only Santa Knows…but even if you already have a physical copy of Only Santa Knows that you purchased last year- well, buy this album too, and gift your 13 track Only Santa Knows album to someone else. Basically anything you can to have a deluxe edition of Only Santa Knows, because the album is definitely worth it. And if you don’t think you can gift Only Santa Knows to anyone, before you buy Only Santa Knows (Deluxe Edition), then purchase the deluxe edition anyway, and keep both versions. It’s that good!

Christmas is a time for nostalgia and a time to move forward, and Delta’s album has a lot of both. Songs like ‘River’, ‘Grown-Up Christmas List’, ‘Frosty The Snowman’ and ‘Sleigh Ride’ , are all standouts for me, and remind myself of how God can often use the nostalgic songs, the songs not necessarily about Him at all, to bring people closer to other people during this festive season of rejoicing and thanksgiving. Delta’s music still has relevance for people today, even though her most chart-topping album is still her debut in 2003. Delta’s music is a joy to listen to; and Only Santa Knows (Deluxe Edition) is definitely an album to listen to and enjoy if you have been a fan of Delta’s music in the past, or even other artists like Tina Arena, Vanessa Amorosi or Guy Sebastian. Well done Delta for such a compelling deluxe-edition album. Maybe another full-length album in 2022 or 2023?