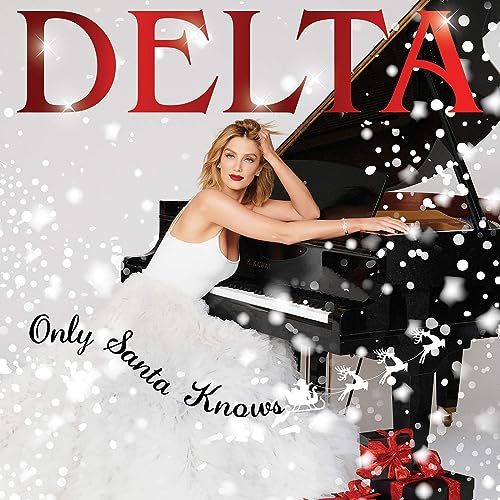 ‘…I just wanted it to be ultra-Christmasy. Like, the more Christmas sounds the better. It was all about finding those sleigh bells, and ringing bells to add to the songs to make it as big as possible. 90 percent of the record, aside from the odd sleigh bell, is me playing piano or Matthew playing guitar. We play all the different instruments, and we even got a real kids choir in and directed them. It’s all beautiful live energy, and we layered everything to be as big and as Christmasy as possible because that resembles the magical part of Christmas, and that was very important to me. Something else that was really important to me was that it had the essence of what I do, and that it wasn’t going to date, it was timeless still, and it was a record that I could bring out every year…I thought that we had gone through so much this year, and I was talking about how my belief system that anything is possible came from Christmas time and Santa. Because, it really didn’t bother me whether everybody in school said that Santa wasn’t real because I told them that there is, and I believed in Santa, and I still do, and that’s all that matters. They would all look at me like “what’s wrong with you”, and I’d be like “I don’t think you’re all understanding me, I believe in Santa, and that’s okay if you don’t”. And that kind of became a metaphor for me with life, like it’s okay if you have different beliefs to me…’ Delta Goodrem has fast become one of my favourite Australian artists ever. Having become synonymous with Australian culture for quite some time, her impact and influence on Australian music is huge, and as I’ve been listening to her music throughout the years (more so on a regular basis ever since her 2016 album Wings of the World); I’ve been noticing this one thing- that God doesn’t really care what type of music He uses for people to understand more about themselves and more about Him in the process- if He chooses to convey His love for creation through a Skillet song, a Chris Tomlin song or even a Delta Goodrem song, then who are we, mere humans, to question anything that He does? Delta’s music has been encouraging, impactful, and dare I say, God-breathed at times- her songs like ‘Born to Try’, ‘Believe Again’, ‘In this Life’, ‘Enough’, ‘Sitting on Top of the World’, ‘Mistaken Identity’, ‘Together We are One’, and more recently, songs like ‘Let it Rain’ and ‘Keep Climbing’; are all testaments of the inspirational influence that Delta has in her music, even possibly without knowing it herself. As I’ve continued to embark along the road of understanding that ‘mainstream’ music isn’t as ‘bad’ or ‘evil’ as I was even led to believe, I find myself being more open to whatever the Lord has in store for me- be it a worship song, a hard rock song, or even a song from an Aussie artist, that can deliver similar punches and remind us all of our desperate need for something bigger than ourselves to sustain us in this life that we lead.

Enter in Delta Goodrem, who I can boldly say I am a fan of. Her new album comes out TBA 2020 (or even 2021), but she’s already scheduling a Bridge Over Troubled Dreams tour in April 2021, so can I assume that that will be the album title? Regardless, Delta released a total of 5 singles this year thus far- ‘Let it Rain’, a charity single in light of the Australian bushfires, ‘Keep Climbing’, the powerful first single which has been confirmed to be on her brand new album releasing soon, ‘Paralysed’, a song unveiled in July 2020, and chronicles her health battle of 2018/19, ‘Back in ‘84’, a song that was unveiled to us in August as a B-Side to the ‘Paralysed’ single, and ‘Solid Gold’, the song that has since catapulted her to international interest and intrigue, even landing her on the Kelly Clarkson Show a month or so back, where she performed ‘Solid Gold’ for people to hear. As I have said time and time again this last year, I’ve come to realise, that if we limit the music in which we believe God can speak to us through, then we really don’t know God and what He really can do…I know, controversial to some, but it’s the truth. And I’m understanding more and more each day, that the God who raised Jesus from the grave, is the same God who can speak through a music genre, or a music style, that may be different from what we as Christians are used to. And maybe, just maybe, that’s ok. For songs can bear the message and meaning of one thing, and when someone hears it, they can attach their own personal meaning to it too. Which is the beauty of why music is such a universal language and a great avenue and vessel to be used by the Lord to speak to people in various different walks of life.

Only Santa Knows released November 12th digitally and November 13th physically, with no prior announcement to any new material actually releasing from Delta. With everyone expecting (myself included) that Delta was going to release an album of new material first, she surprised everyone with a Christmas album. Standing at 13 tracks, and having Delta’s trademark vocals and piano all over the songs, this is by far one of the most emotive, tranquil, heartfelt and peaceful Christmas album releases in 2020 thus far. On the same benchmark as Pentatonix’s We Need a Little Christmas, Only Santa Knows presents songs familiar and unfamiliar, songs holiday and other songs carol, to create and curate a track-listing that is very distinctive of Delta’s musical ability. Songs like ‘Have Yourself a Merry Little Christmas’, ‘Rudolph the Red-Nosed Reindeer’, ‘Rockin’ Around the Christmas Tree’, ‘Santa Claus is Comin’ to Town’, ‘White Christmas’ and ‘Deck The Halls’ have all been in and around us all during Christmastime as these holiday songs have been synonymous with Christmas culture for ages- and now Delta has placed her own spin on each of these songs. While I myself still am not connecting as much to songs like ‘Santa Claus is Coming to Town’ and ‘Rudolph The Red-Nosed Reindeer’ (primarily on the fact that we all know Santa Claus isn’t real…so why do we celebrate him anyway during Christmastime?), but songs like ‘White Christmas’ really remind me of the Northern Hemisphere winter Christmas that is depicted so much in movies and TV shows, and a style of Christmas that I know I want to experience sometime in my life, if only once. ‘Little Drummer Boy’ and ‘Silent Night’ are the two carols present in this album, and while both these songs still don’t hold a flame to the versions by for KING AND COUNTRY (‘Little Drummer Boy’) and Lincoln Brewster (‘Silent Night’) respectively; Delta’s renditions of tremendously popular songs have solidified why I enjoy these two carols so much. ‘Rockin’ Around the Christmas Tree’ is a great attempt at doing some swing-1950s atmospheric track, but for me, nothing is as good a version of the song as MercyMe’s from their 2005 Christmas album back in the day. Delta’s duet with Gurrumul is nothing short of emotive, powerful, and dare I say ‘worshipful’ for the song ‘Silent Night’, while Delta’s own collaboration with Olivia Newton-John in the album closer ‘Merry Christmas to You’ is something out of a movie- it can totally fit as a credit’s song to a movie in the future. Delta and Olivia’s vocals blend so well together, as we see a song that reminds us all that extending Christmas wishes to people is something that people need to hear during an uncertain time like this.

‘River’, a cover of the ever-beloved Joni Mitchell’s song, is presented under the musical backdrop of ‘Jingle Bells’ as Delta presents and paints a picture of a breakup of a relationship, and the singer longing to escape her turmoil and her pain, down a river so long that she can skate away and never look back. With Joni’s song being the most secondly recorded track by people in her whole career (only second to ‘Both Sides Now’), Delta’s rendition of the track is a hauntingly refreshing twist on a song that encourages us all to open up and be vulnerable during a season of time where being closed-off has kept us safe for all this time of 2020. Original track ‘Only Santa Knows’ and fan-favourite modern Christmas hymn ‘Grown-Up Christmas List’ round out the songs on this album, and both resonate for different reasons- ‘Only Santa Knows’ speaks about this notion that there is only one person (in this song, it’s referred to as ‘Santa’) that knows us much more than we ourselves do, and that gives us comfort and freedom to not pretend or put on a show, because in knowing someone fully and better than themselves, comes this notion that in knowing comes loving, that to be fully known and loved is something that people need a lot of during Christmastime. While the song talks about Santa, I know that somehow, this song reminds me so much of how Jesus knows us far more than we can ever know, and loves us in spite of everything, unconditionally. ‘Grown-Up Christmas List’ is a great reminder to re-examine all the lists we wrote when we were children, all the things we have hoped and dreamed of the future, but now haven’t seen to be reality, for whatever reason. ‘Grown Up Christmas List’ looks at the innocence of childhood, and the wishes and hopes, the prayers we may have had before, but may have stopped wanting and praying for now, because of the jadedness of the world. This song, popularised by CCM icon Amy Grant, is a great way of getting people to look into their pasts, to see all the forgotten dreams of youth, and to hopefully realise them and bring them into reality, with the help of family and friends in the process.

Christmas is a time for nostalgia and a time to move forward, and Delta’s album has a lot of both. Songs like ‘River’, ‘Only Santa Knows’, ‘Grown Up Christmas List’ and ‘White Christmas’, are all standouts for me, and remind myself of how God can often use the nostalgic songs, the songs not necessarily about Him at all, to bring people closer to other people during this festive season of rejoicing and thanksgiving. For Only Santa Knows the album is on par with Pentatonix’s album this year; and reminds us that Delta’s music still has relevance for people today, even though her most chart-topping album is still her debut in 2003. Delta’s music is a joy to listen to; and is definitely an album to listen to and enjoy if you have been a fan of Delta’s music in the past, or even other artists like Tina Arena, Vanessa Amorosi or Guy Sebastian. Well done Delta for such a compelling album, can’t wait for the next full-length studio album coming TBA 2020/21.