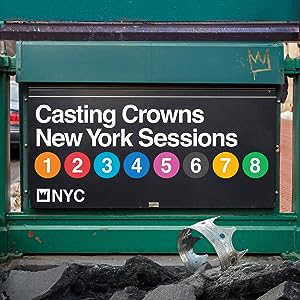 For me these last few years, I’ve been listening to a band that is as popular within the Christian music community as they are controversial, they are as biblically sound as they are vibrantly convicting. They have helped me immensely on my own walk with God these last few years; and are one of my favourite bands of late. Casting Crowns, a band that has been talked about amongst people who love Christian music (like myself) for ages, was borne out of Florida, and is one such band that comforts and unsettles at the same time. They give us melodies of hope and encouragement, and other songs, they try to poke and prod, to have a reaction of change in a community that needs it, by provoking emotions of discomfort, as we look and see what is wrong with society and the status quo, and to act upon these convictions, as we try, with God’s help, to rectify what has been shattered and broken, maybe for generations. What I have found to be admirable about the band in general, when compared to the countless other bands that have toured relentlessly over the years, is that they’ve always been grounded in their local church. While still operating as a full time band, they are still at home at least half of every week. So while I’m sure other bands do around 200+ shows per year, Casting Crowns would probably want to limit the exposure of touring to around half of that. And maybe that’s ok. I’m sure, regardless of touring schedule, and whether a band tours more or less, a band can still be effective- and Casting Crowns have proven, that though they don’t travel as much as other bands do, they still impact and affect the lives of everyday people, myself included.

The band have had a storied and prolific music career over the years. Having their humble beginnings in Florida, Casting Crowns have now become such a band that has given to us a lot of albums, alongside many awards and opportunities to bring songs to the masses through the radiowaves. To put it bluntly, Casting Crowns write music that is primarily radio friendly and accessible to the average joe person, but all the while carefully crafting some of Christian music’s most emotive and poignant lyrics. In essence- lyrically, the band is top notch, with much of the music, in fact, all of it, grounded in the Word of God, and reminding us of the qualities of God and who we are in light of that. The music as a whole, will leave a lot of listeners to be desired, because frankly, Casting Crowns aren’t as musically risqué or even inventive when compared to many other artists within the CCM community- the likes of Crowder, All Sons and Daughters, Third Day, Andrew Peterson, all these guys have a much more interesting musical backdrop compared to the band out of Florida. And maybe, that’s ok. The band hasn’t really focused too much on the aesthetics and how the music sounds in the grand scheme of things. If the song touches a person’s life, then the band has served their purpose.

The band unveiled an EP this last month or so. On the heels of their best-of 16 track collection of songs thus far in their career (all bundled into a best-of compilation album), the New York Sessions decided to be dropped on digital outlets just this past week. Inclusive of some of their chart-topping hits (Lifesong, Voice of Truth, Praise You In the Storm), their lesser known hits (Broken Together, Loving My Jesus) and their most recent hit ‘Only Jesus’, this 8 track EP recorded live on a NY soundstage is such a collection that ought to be a must- if you are a Casting Crowns enthusiast. Encapsulating everything that is right about recording in one take, and in a ‘live’ setting, we see the band in their element in each corresponding music video clip, delivering each line with poise and grace, with passion and gratefulness as some of these songs continue to minister to me, even years later from whence they were written!

Quite possibly one of the greatest songs they’ve ever done, ‘Who Am I’ brought the band onto the map of Christian music, as this song is by far one of the standout songs I’ve heard within the 2000s decade. Full stop. A song that really wrestles with the idea of who we are and who we believe to be who God is, and how to reconcile the fact that Christ came to be sacrifice for us when we were most definitely not worth it; ‘Who Am I’, for me personally, is one of my favourites from the band, ever, and a song that I can always come back to if I’m feeling down or worried. ‘Voice of Truth’ is another similar song- one of hope and comfort as Mark Hall, lead singer, relates our own fears and insecurities to that of Peter, disciple of Jesus, and David, who was tasked to protect the city and fight against the giant, Goliath, and his crew of followers. He breaks down the bible characters into people that you and I can relate to, and that’s the beauty of Casting Crowns and their music. Though he’s still talking about the bible, the characters of the bible can seem so far off and not relatable to us of the present day, yet Mark himself brings out the humanity in these biblical characters for them to be people we can see ourselves in at times. And that is what makes, I reckon, most of Casting Crowns’ song much more relatable than arguably any other CCM artist there has been, in quite some time!

‘Broken Together’, ‘Lifesong’, ‘Praise You In the Storm’, ‘Loving My Jesus’, ‘Only Jesus’ and ‘East to West’ are the remaining songs on the EP, and each of them has a special message of encouragement that’s given to us as we hear Mark passionately declare his musings in each of the songs. Each of them are standouts over the career which is Casting Crowns, as the band deliver songs that over the years have ministered to each of us in our hearts- ‘Broken Together’, quite possibly the most vulnerable song from their 2014 album Thrive, paints what its like to go through a marriage in a realistic way- broken, as we’re reminded that no two people in such a committed relationship are ever going to be ‘perfect’, that being a little broken together and navigating life and marriage in that sense is what I strongly believe we are called to undertake, knowing that in our weakness, the Lord uses so that His strength shines through. ‘East to West’ allows us to fully recognise how far the Lord has thrown our sins and mistakes- as the east is from the west, and that reconciliation between Christ and creation has in fact been fulfilled, while ‘Praise You in the Storm’, the most vulnerable and heartfelt song I’ve heard from the band…ever (aside from the ever-personal, gut-wretching and spirit-filling ‘Oh My Soul’!), gives us hope and clarity that regardless of the storms in our lives, we ought to praise the Lord not because of our circumstances, but because of who He is and what we can see the Lord undertaking and using, through them and in spite of them. It is songs like these that have become the soundtrack to each of our lives over the years, and thus, it’s nice to see (through videos of the NYC Sessions on their youtube page here) and hear similar yet different arrangements to them. And while for me I feel like the arrangement for their newest song ‘Only Jesus’ in the NYC Sessions ‘rendition’ sounds exactly the same as the studio recording from the album Only Jesus released last year, what I can still say is this- that these songs, both from NYC Sessions and songs from Casting Crowns in general, have challenged people’s lives from far and wide. It is their longevity and their ability to give to us songs that are very much relatable in our everyday lives as they are biblically grounded, that really speaks to the testament of their influence, not just within the confines of CCM, but throughout all modern music, period.

Casting Crowns have had a plethora of radio hits in the past; and will so in the future. They’ve influenced people’s lives, mine included, and have influenced not just CCM but I believe music in general; and have shown the wider community that it is ok to unveil vulnerable and innermost thoughts in music, especially when you’re a CCM/Christian music artist. It is assumed by and large that much of CCM seemingly appears fake, and that music artists write from a place of elevation of self compared to others. And yet when we hear Casting Crowns and their music, there is a sense of honesty and urgency, of compassion, care and a hope that is presented that is seemingly lacking, especially in the mainstream music industry. There is a sense of realness to Casting Crowns the band and their songs, and their new album New York Sessions carries to the fore with the realness and relevance that has made them flourish in an industry that is ever competitive, from their inception, till now, and most certainly in the future. Mark and co. have given to us 8 songs that I’m sure have spoken to them the most, and 8 songs that have been with us over the years, at various life event points as we live our rollercoasters with the Lord by our side. For fans of Casting Crowns, or even fans of Christian music in general, this is a must have if you’ve either been a fan from the start, or even a brand new one. Maybe, just maybe, pick this one up alongside their best-of 16 song collection (also released in November 2019) and gift it to a friend in the future? Well done Mark and co. for such great renditions, here’s hoping that the next studio album recording is as poignant and heartfelt as Only Jesus last year!

3 songs to listen to: Only Jesus, Praise You in the Storm, Loving My Jesus