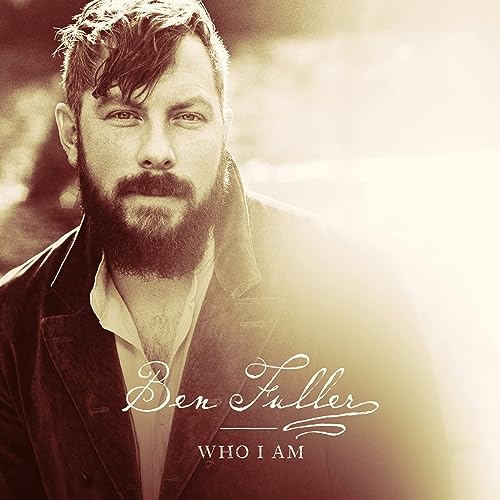 Ben Fuller– Who I Am (Amazon mp3/iTunes)

With a sound akin to Zach Williams, Third Day, Needtobreathe, Sanctus Real and Citizens; Ben Fuller is Provident Label Group’s newest signing. With his smash hit single “Who I Am” making incredible waves on CCM radio throughout this year; Ben released his debut project Who I Am last week. Comprising of 8 tracks, Ben’s collection of heartfelt, powerful, and inspiring songs could have slipped underneath the radar, had all of us chalked him up to being a ‘Zach Williams wannabe’. Thankfully, Ben is making his own mark and everyone is taking him seriously. Thus, I decided to check out his music anyway; and boy, is it incredibly impressive. It’s one of my favourite EP’s of the year thus far!

Releasing my first ever major label album with Sony/Provident is such a day of rejoicing and reflection for me. My past and present are recorded in lyrics and melodies – all wrapped up in God’s grace and redemption and how turning my life over to Him – has changed my whole world. I pray for all who take the time to listen to Who I Am, that God draws them nearer than ever before.

This song [the title track] is an anthem for me. It allows me to remind myself who I am. I left the old me. It’s a powerful song to watch people own for themselves and watch them shout it out loud. There’s nothing like kids and adults and everyone in between singing, ‘I’m a child of the most-high God and the most-high God is for me.’

God knew I needed a reminder of who I was meant to be. What came out of the [writing] room that day was an anthem and a declaration of who I was, how I’ve changed, and now, who I am. I was tired, I was lost and weak, and I was constantly running away from my problems. I felt like I was always looking for something more. The song came to me because I asked God for a reminder of who He made me to be. “Who I Am” is a declaration I needed to shout from the highest peaks, about how He’s changing my life. I want to share the love of God that I’ve come to know. I want to be like Jesus to everyone I meet, and I want to encourage others to never be ashamed to tell their story, no matter what.

Do we need to know the ins and outs of Ben’s history and story before diving into this collection? No, I don’t think so. Because the songs are so melodically and lyrically strong- they speak for themselves and then some. EP opener “World Changed”, is a rousing, powerful and declaratory testimony-like anthem of encouragement and confidence, as Ben emphatically relays to us all that Jesus has saved his life, and that ‘…like jumper cables to my chest, from death to life in just one breath, You left an open grave, that’s the moment my whole world changed, like lightning tearing through the dark, Your love came bursting through my heart, oh, what amazing grace, that’s the moment my whole world…’. It’s a track that speaks about Ben pre-becoming a Christian, and the moment his whole world changed; but it’s also the type of CCM song that ties everything up in a neat bow- all of the questions and the doubting are ‘solved’ by the song’s end. To be fair, that is the nature of CCM, and generally that is how songs go; but the way this song is structured doesn’t diminish my enjoyability- that’s for sure!

The rest of Who I Am showcases Ben’s lyrical and musical prowess, as Ben goes extremely deep for a debut project- it’s pretty impressive. The title track is a eclectic, celebratory and joyous pop melody outlining that Ben has been set free, and that who He is in the eyes of Jesus is a child of the Most-High God; while “Wide Awake” is a piano prominent mid-tempo ballad highlighting the ever-true fact of Jesus waking us up to the eternal truth of Jesus and the reality that He is the Only thing that we need in this life. The acoustic guitar heartfelt melody “Other Plans”, probably the most personal and emotional song on the album, speaks about Ben’s unsuccessful suicide attempt, and the fact that Jesus had plans for Ben that he didn’t calculate or think about; while the strings-led “But The Cross” encourages us and inspires us, with Ben outlining the gospel message, and that ‘…the cross says they’re wrong, don’t believe the words they say, let the truth wash them away, ’cause His blood says you’re loved, every lie is bound to leave, when there’s nothing you believe but the cross…’.

“He Found Me”, a country/southern gospel infused track, speaks about the moment Jesus found Ben while Ben was in the midst of finding love and acceptance in alcohol and drugs, with the melody being one that is personal to Ben, and one that will resonate with others going through the same thing. “Proud”, another personal and emotional melody, is a track where Ben sings about his earthly father, and about how he prefers to make Jesus proud of him rather than his father proud of him; while Who I Am ends with the piano only ballad “Chasing Rebels”, another melody where Ben outlines his testimony of how God saved him, while Ben also imparts some wisdom from his story to the next generation.

What more can I say about Who I Am the EP that I haven’t mentioned already? Ben Fuller has released a superb and exemplary project; and one that will be on my various playlists for months and maybe years to come. Sky is the limit for Ben, and here’s hoping that he releases a debut full-length album very soon; but until that day comes, let’s just bask in the awesomeness of this EP, shall we? Well done, Ben, I can’t wait to hear what is next from you in the near future!

3 songs to listen to: Who I Am, But The Cross, Chasing Rebels