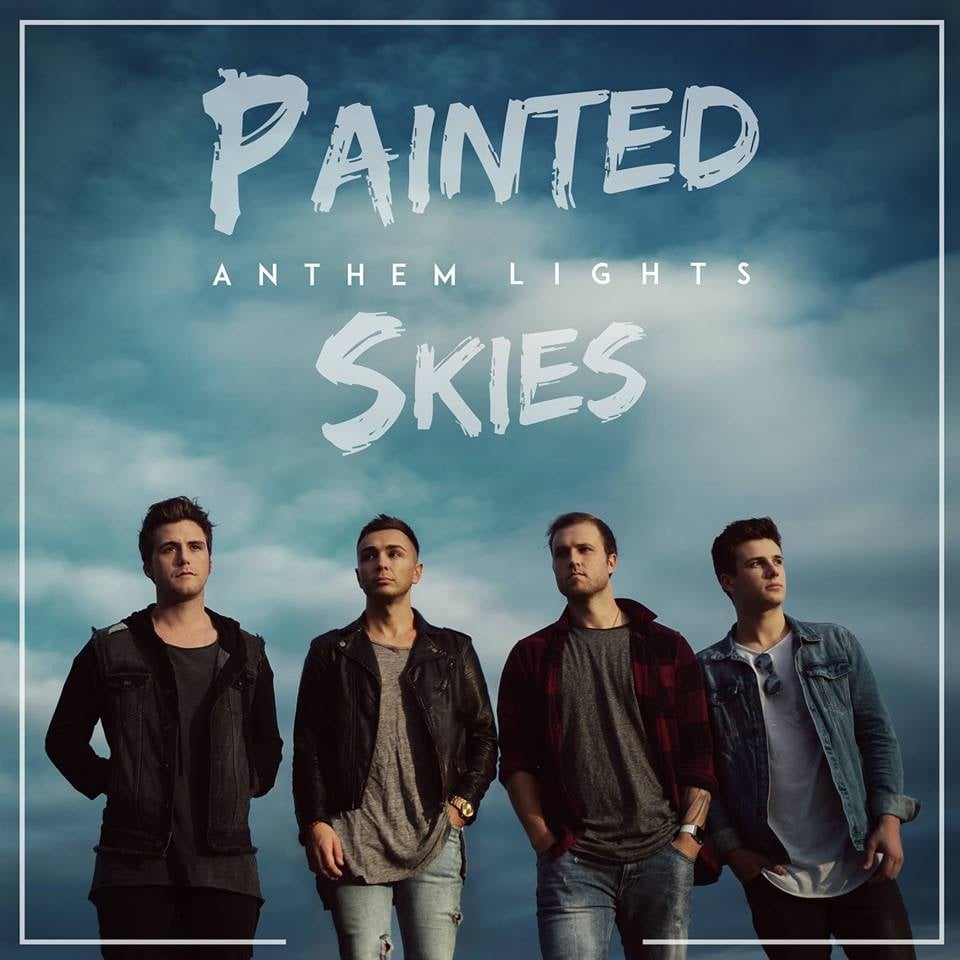 Anthem Lights, formally known as Yellow Cavalier before they signed with Reunion Records; have garnered quite a fan base since the band’s inception. The band previously unveiled their self-titled debut album in 2011, an acoustic EP in 2012, 3 more studio albums (You Have My Heart, Escape and Hymns) in 2014, 2014 and 2017 respectively, plenty of cover EP’s and albums (inclusive of a Disney and Christmas EP’s!), as well as a brand new single “Just Be You” last month (which isn’t present on their latest album!). There’s also been a few member changes (the exit of Allan Powell and Kyle Kupecky, and the additions of Spencer Kane and Joseph Stamper); and just this past couple of weeks, the new studio project Painted Skies, funded through kickstarter, released. Though I didn’t really know what to expect lyrically and thematically (although I did think maybe 80 or 90% pop/boy-band material musically), what resulted after me listening to Painted Skies several times, was a greater appreciation of the band now- 4 grown up men of God, of which the music reflects their spiritual maturity. Sure there are not as much tracks about Jesus present in these 10 heartfelt tracks, but with plenty of material covered, from their struggles in life to romantic relationships, I reckon Painted Skies is the start of a new fresh journey as a band, as they travel into untapped markets musically and lyrically. Perhaps God is calling them into the mainstream? And though plenty of critics may suggest that Anthem Lights have run their course; I would have to disagree- this is the start of something special.

With the 1 minute spoken word title track opening proceedings, with each member giving an earnest account of what their album is all about, against an anthemic soundtrack like strings prominent epic musical background; the real stuff begins with the piano prominent radio friendly pop tune “Who I’m Meant To Be”. Hard hitting and poignant lyrically, it’s quick to see that Joey, Spencer, Chad and Caleb sing quite well together, as they inspire and provide us with confronting questions we may be afraid to ask. In this track, the band tackle the issue of coveting, and encourage us to instead of wishing for someone else’s life, to try to be who God has meant for us to be. Unashamedly and fearlessly declaring the ever-true words and catchy refrain that ‘…I don’t wanna spend my life trying to fight for what’s not mine, I don’t wanna lose myself in someone else’s dream, I know I was made with a purpose to reach past the surface, live life fearlessly, I want nothing less than to be who I’m meant to be…’; this track is a statement of the band’s priorities, that they are only concerned with doing what God has called them to do. And so it should be with us as well- not concerned with the person on the left, on the right, or in front, or behind. Only comparing what we do to our own previous efforts, and also with the Word of God, seeing how what we do relates to God’s plan. Comforting yet also challenging, “Who I’m Meant To Be” sets the tone for the rest of the album, which is more than worth the three year wait.

“Good Fight”, a 3-minute explosive, bass guitar driven toe tapping, danceable pop tune ala Newsboys mid-90’s era, is next, and is an infectious ball of energy and fun. As the four members trade vocals effortlessly and seamlessly, declaring that everyday they’re in a war with themselves, and everyday they’re fighting the good fight with themselves, thematically I’m reminded of the impacting and inspiring jazz/soul infused “Good Fight” from Unspoken, and like that tune of the same name, Anthem Lights gently remind us that though every day is a struggle, determination and belief in ourselves can get us through each day. Lyrically and thematically similar, and equally compelling, freeing and healing, is the piano prominent mid-tempo ballad “Says Who”, a track sung to all of the band’s haters, doubters, and maybe even the devil himself. As the band speak out and rebuke negativity in their lives, declaring ‘…who do you think you are? I’ve already come this far, why do you wanna go and stop me, stop me, oh, I don’t wanna start a fight, but who’s to say I’m wrong and you’re right? It must be easy to call me crazy, oh, says who?…’, we are presented with a no-nonsense and in-your-face proclamation of who we are as people, that isn’t dictated by anyone except for ourselves (and Jesus of course!). Well done guys for a refreshing take on inspiration, as we remember that there is a unique path set for us in life, and no one can tell us otherwise where we should go or who we should be.

Yet the quality massively improves with the acoustic guitar prominent slower tempo reflective piece “Automatic Love”, a melody that declares that the persona will love his/her spouse with an automatic and unconditional love- a metaphor for the immense and far reaching love Jesus has for each one of us; and the guitar led mid-tempo ballad “Working On It”, which admits that even though the persona is in a rough spot with their spouse, they are willing to work on their issues, and stay faithful to their vows of ‘of death to us part’, because of God’s perfect plan for both of them. While the final ‘relationship’ style song is the lullaby-ish guitar led hopeful and joyous “Keep You Close”, with the band singing from the point of view of someone who is making a stand, and actively choosing to be with someone, and keeping them close before they slip away, and the chance is gone. There are indeed moments in life that we need to grab with both bands, and we may not even know what they are until we’re in them, and “Keep You Close” is a reminder than every day could be our last, so we ought to cherish the time we have with our loved ones, and pursue the person you want to be with, because tomorrow could be too late.

Radio friendly piano led gospel/soul infused “Nobody’s Right” subtly delves into politics, and the differences dividing the world, encouraging us all to come together despite our many world views, and ‘…talk less, love more, seek truth, be the change that you wannna see…’, and should be impetus for us to start seeing people with different morals and values as still human, and needed in this world to challenge us, question our world view, and reaffirm our belief system; while the acoustic guitar prominent Steven Curtis Chapman “Cinderella”-like melody “You Will Always Be My Son”, completely sung only by Caleb (as well as his wife Kelsey), about the love he has for his son Emmett, tells the story of the fraction of the love Jesus has for each one of us- it’s a song that I’m sure will bring tears to all who listen, as it’s such an honest, personal and beautifully sung track. The final melody on Painted Skies is the soundtrack like anthemic and orchestral piece “Falling Awake”, where each of the four vocalists eloquently highlight and reiterate, albeit somewhat ambiguously, that the person they want to be with is ‘you’, a reference to their spouse or God, and it’s that ambiguity, that I reckon will propel them more in the mainstream market a bit more. Well done guys for a well-rounded album that has immense replay value in the many months to come.

Anthem Lights’ Painted Skies is a brilliant comeback in what is a varied, colourful and interesting career thus far. Despite a couple of shortcomings (“Better Together” as well as maybe a couple of tracks being shorter than they probably needed to be!), the positives here more than outweighs the negatives, namely with Anthem Lights able to reawaken in us the notion of worshipping Jesus through the simple yet effective melodies, though not necessarily mentioning Jesus by name. With their faith keeping them grounded, I am certain that this band will be within the CCM/pop industry for many, many years to come. Well done Anthem Lights for such a captivating and cheerful album, as we look to the future, and become all who God has planned for us to be!

3 songs to listen to: Who I’m Meant to Be, Says Who, Falling Awake