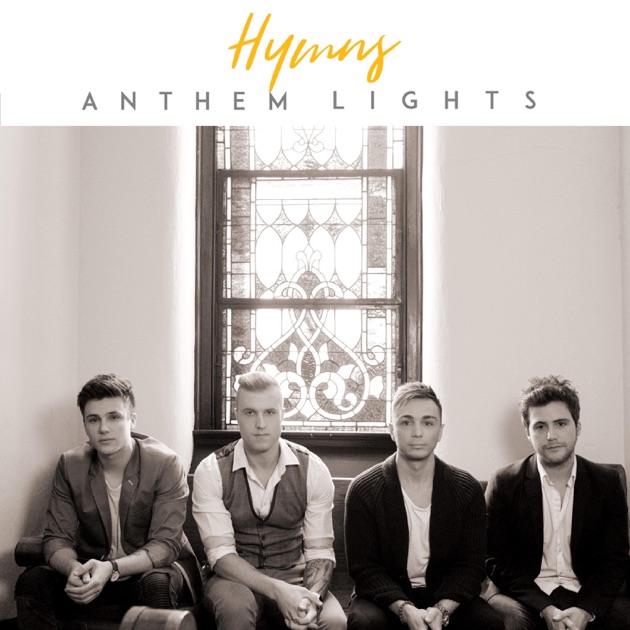 Anthem Lights, formally known as Yellow Cavalier before they signed with Reunion Records; have garnered quite a fan base since the band’s inception. With the band unveiling their self-titled debut album in 2011, an acoustic EP in 2012, 2 more studio albums (You Have My Heart and Escape) in 2014, plenty of cover EP’s and albums (inclusive of a Disney and Christmas EP’s- reviewed here and here!), as well as plenty of member changes (the exit of Allan Powell and Kyle Kupecky, and the additions of Spencer Kane and Joseph Stamper); next year seems to be the year where they release all new original studio material, as we wait to hear the band’s new studio project Painted Skies. However, the band aren’t done yet releasing new projects- Painted Skies doesn’t release until later on in 2017, yet Anthem Lights have proudly presented to us…wait for it! Yep, a 10 song hymns album, titled Hymns (how original!), comprising of 5 medleys (what they do best!) and plenty of inspiring harmonisation and catchy hymn renditions to immerse us in the worshipful spirit. And though plenty of critics may suggest that Anthem Lights have run their course, with member changes, and the bulk of their discography being ‘mainstream’ material anyway; I would have to disagree.

One listen to Hymns reminds us all how these guys are still on fire for Jesus, and we can indeed be encouraged by the band to worship the Lord Almighty. Thus, before we find out how Spencer fits in with the band in his first full length album with the group, of all original songs, in Painted Skies this year, let’s dive in to see how this hopeful, inspirational and powerful hymns project resonate with myself and others! Because hymns are timeless and have been recorded plenty of times throughout the years, artists’ renditions of traditional hymns can be hit and miss sometimes. Either a hymn stays close to the original, or is completely altered beyond recognition- with the outcome being powerful, gripping, haunting and compelling, or distracting and less than memorable. Though while many of the songs on Hymns are not of the traditional variety (kudos to the band for stepping out of the box and doing something different!), what is the result is bit of a mixed bag.

First of all, let me just say that on Hymns, half of the track list are medleys. Not that that’s a bad thing by any means, but rather it’s interesting, given that most of these tracks are 3 minutes long, and contain at least 3 or 4 hymns within the duration, of which some work and some do not. “Christmas Hymns” comprises of worshipful carols, yet sounds sometimes out of place, in part due to the fact that there are 6 carols jammed into 3 minutes (O Little Town of Bethlehem, Away in a Manger, Silent Night, Hark the Herald Angels Sing, Joyful Joyful We Adore Thee, and Joy To The World); however there’s no denying the passion evident in the exquisite and encouraging vocals of Chad, Caleb, Joey and Spencer.

Intense passion and love for Jesus also shines through in the piano led “Hallelujah Medley” where the band sing “Hallelujah What A Savior”, Leonard Cohen’s “Hallelujah” and Michael W. Smith’s “Angus Dei”, a medley that at first is seamless, then later on is disjointed a bit due to differing tempos during each song’s respective choruses; while the traditional “Hymns Medley” comprises of 6 melodies (Amazing Grace, Be Thou My Vision, Come Thou Fount, I Need Thee Every Hour, I Stand Amazed and Blessed Assurance) yet the 3 minute tune is brilliantly recorded and sung, with the piano at the foreground as well as some impressive acapella work! The final two medleys are the “Southern Gospel Medley” (I’ll Fly Away, Swing Low Sweet Chariot, I Saw The Light) and “Easter Medley” (Because He Lives, My Redeemer Lives, Arise My Love)- the former a somewhat disjointed tempo-wise energetic mish-mash of upbeat hymns, and the latter a collection of reflective tunes for Easter and Good Friday- a medley that is probably flows the best out of the five, and is my favourite medley on the album.

Out of the other 5 non-medley tracks, my eyes immediately travel to the somewhat overplayed yet also impacting and powerful “Good, Good Father”- not necessarily a hymn, but maybe reaching hymn status in the next ten years or so. Written by Housefires and covered by Chris Tomlin, Big Daddy Weave, Casting Crowns and Zealand Worship; Anthem Lights make the worshipful cover their own, as they emphatically and ardently recount that ‘…You are perfect in all of Your ways to us…’, pulling at my heart strings, with the simple melody reaffirming the belief that God is a good Father and He loves to provide and lavish His children with good gifts. Not as poppy or rocky as Zealand Worship’s version, and just as laid back and worshipful as Chris Tomlin’s rendition, Anthem Lights have provided us with a worthy version, of a song already popular by listeners and critics alike, and will continue to be in the future!

A 2-minute version of “Doxology” is also present here, featuring the guest vocals of Selah, and my only nit-pick of this track is that it’s too short, and the band only sing the first verse and do not add anything else (like an added chorus etc.). While the remaining three melodies are “It Is Well”, “I Need Thee Every Hour” and “In Christ Alone”, with all three being sung close to the versions we have all come to know and love, and each driven by the inspiring and captivating piano and strong vocal harmonies. Well done guys for a thoroughly enjoyable hymns also, although an original track or two would have definitely added more depth for the album as a whole. Maybe less medleys, or more cohesive medleys as well…

Anthem Lights’ Hymns is a solid entry into what is a varied, colourful and interesting career thus far. Despite the album’s shortcomings (the disconnectedness of some of the medleys), the positives here more than outweighs the negatives, namely with Anthem Lights able to reawaken in us the notion of worshipping Jesus through the simple yet effective hymns. With their faith keeping them grounded, I am certain that this band will be within the CCM/pop industry for many, many years to come. Well done Anthem Lights for such a captivating, cheerful and worshipful EP, that I’m sure will provide us with moments of reflection this Easter! Bring on Painted Skies!

3 songs to listen to: It Is Well, In Christ Alone, Good Good Father