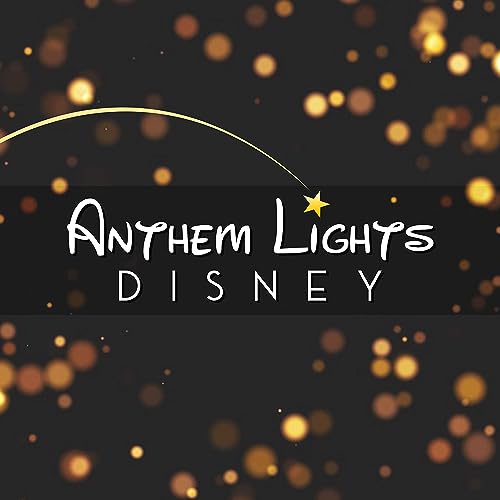 Anthem Lights are a global phenomenon. Sure, they’re not signed, and sure, they’re more famous for recording heartfelt and poignant covers; but one look at their youtube account and the number of views that are building up, then I’m sure you’ll know why they’re popular and in a unique position to be one of today’s most influential artists. And if you’ve read any of my many Anthem Lights reviews on the site over the past few years, then you know who Spencer Kane, Joey Stamper, Chad Graham and Caleb Grimm are. And you all would know what they’re all about in terms of each of the four members being on fire for Jesus, passionate about their faith and passionate about their music also. But if you somehow are not in the loop as to who these young men of God are, then you can read my reviews of Anthem Lights’ projects right here, and now you can be caught up and in the know. I’m not going to repeat myself, so you all better get on with reading, alright?

Now hands up who loves Disney movies! Me! Yep, I put my hand up way in the sky and I’m not ashamed to say that movies like The Lion King, Aladdin, the Toy Story franchise, Mulan, Tarzan, Hercules, Monsters Inc., and others (yep, inclusive of A Goofy Movie!); have all resonated with me in the past. Part of that reason was because as I was a child growing up in the 90’s, naturally you would watch Disney movies, but another part of why these movies stayed with me even now til this day, was because of the songs. Yep, in case you haven’t been paying attention and instead have been living in the Stone Age; let me say that a big part of Disney movies is the numerous songs sandwiched throughout the duration, sometimes even as much as 10 songs can feature in a Disney film. Simple yet hopeful, resounding and emotional, these songs from Disney films are timeless. I’m not aware of who wrote these gems, or who originally sung them (apart from Phil Collins who sung all the songs from Tarzan!), but it’s irrelevant. Disney are now doing what they do best, and that’s creating live action remakes of all of their cartoon hits (and that feat will be remarkable in and of itself)- and I’ll be gladly anticipating every one of these movies. So, to the surprise of probably no one ever, in anticipation of the live action version of The Lion King, Anthem Lights have jumped onto the Disney bandwagon. Yep, they’ve released an album full of Disney songs. And does this album bring back any nostalgia and sentimentality? Is it any good? Well, it’s a mixed bag, but still gets me excited of the future of Disney, as well as the upcoming TV channel Disney +.

Anthem Lights are notoriously known for recording medleys and including 5-6 song snippets within a 2-3 minute tune. Doing a song justice? Some would say yes, and these are the fanatical group of people who just love Anthem Lights, who believe that Joey, Spencer, Caleb and Chad could do no wrong. No matter what, they’re right, and it’s their opinion that matters only. But I believe that some medleys sound fine and work, and others do not, especially because most times Anthem Lights keep the melody of each of the songs they incorporate into the medley, thus sometimes songs are sung with many different tempos and no flow. In this Disney album specifically though, most of these songs are medleys, of which some are sounding quite cringeworthy. It’s nothing against these young men of God; but Disney does leave much to be desired. Unlike Worship EP in which the numerous medleys flowed seamlessly, these Disney medleys are the opposite. It’s a shame cause I love Anthem Lights and I love Disney films. This album is something though that I may not listen to in its entirety again.

With Anthem Lights previously reiterating that they will always keep creating worship music in tandem with pop music and other types of genres; sky’s the limit for these guys. So while we wait to see what they’ve got next in store (maybe a full length all-original album next year as a follow up to Painted Skies? Or even a Greatest Showman album?), let us marvel at how these guys deliver timeless Disney anthems, and let us remember that while we may not love these renditions of Disney classics, others may love them. We might love them in the future too. And with that I will leave you, as Joey, Spencer, Caleb and Chad minister to our souls!

3 songs to listen to: You’ve Got A Friend In Me, How Far I’ll Go, Lion King Medley