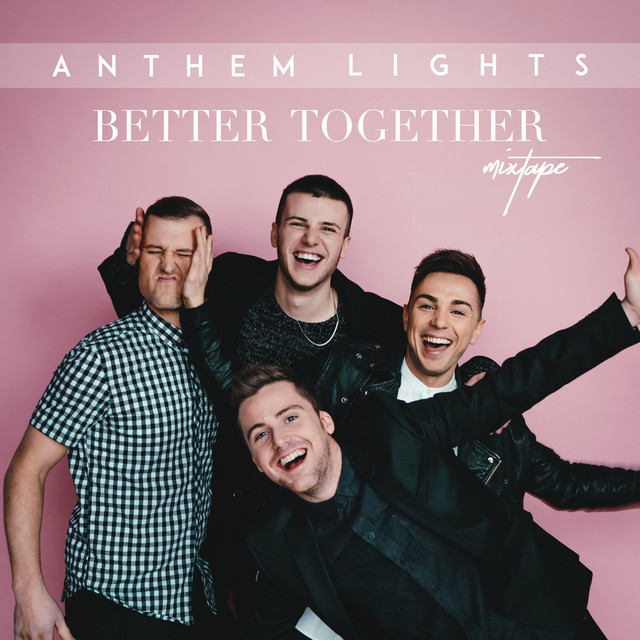 If I was to say the name ‘Anthem Lights’, probably one of the first things that come into your head are the various covers or medleys these guys do, of mainstream songs, or even the individual member’s side solo careers as well. These guys are on Patreon, as well as having recently started their own podcast, so maybe those things spring to mind as well. However, behind the powerful and captivating vocals and exquisite harmonisation from Spencer Kane, Joey Stamper, Chad Graham and Caleb Grimm; are four young men who are passionate for Jesus, definitely showing in their original material. Painted Skies, Escape, You Have My Heart and their self-titled debut project shows us that their ministry in the mainstream is not done, as well as their ministry for their Christian brothers and sisters.

If you take one look at their discography, you can evidently see just how busy these guys are! Anthem Lights unveiled their self-titled debut album in 2011, an acoustic EP in 2012, 2 more studio albums in 2014, plenty of cover EP’s and albums, not to mention plenty of member changes, culminating in their most recent album Painted Skies in 2017. The quartet even released 2 hymn projects, and covered Lauren Daigle’s crossover hit single “You Say” a few months ago! But way back in February, the group unveiled yet another album- a mixtape called Better Together. Containing 2 songs from each of the solo artists, plus 2 versions of “Better Together”, this release is kind of a promotional album of sorts, as it’s a music advertisement for the band and their solo endeavours. Though the project flew by underneath my radar, what these compelling and inspiring 10 melodies show us, even now, is that even though each of the four vocalists sing quite well on their own, Anthem Lights’ music is well, for lack of a better term, ‘better together’ when Joey, Caleb, Spencer and Chad sing together and inspire us all to live a life to the full and a life dedicated to Jesus. Some of us may fret thinking that the group would up and quit considering how successful they are as solo artists; however I reckon that being a group together should be first and foremost their ministry, until the Lord places upon their hearts and different avenue to share the gospel.

The rest of the project takes the focus of Anthem Lights the band and onto the individual members of the quartet as Joey, Spencer, Chad and Caleb each step out into the solo spotlight and minister to others about God this way as well. As original member Caleb sings with his wife Kelsey in a couple of offerings (“My Heart Will Go On” and a medley of “10 000 Reasons” and “What A Beautiful Name”) across vibrant keys, we are presented with a husband and wife duo that are sure to impact both Christian and mainstream media for the foreseeable future, even if Anthem Lights split up (and that’s a big if!); while another original member Chad delivers some of the best performances he’s ever recorded as a solo artist, in “Even If / I Can Only Imagine” and “What A Beautiful Name”, and displays to the world his incredible vocal ability- Chad beyond a shadow of a doubt, is a breathtaking vocal performer- the sooner we realise this, the sooner we can enjoy his crazy good singing range! Joey Stamper is equally as impressive as Chad vocally, as he covers John Mayer’s “In The Blood” and a medley of Shawn Mendes’ “Mercy” and “There’s Nothin’ Holding Me Back”; and the album rounds out with offerings from Spencer Kane. As Spencer delivers his electric guitar led laid back mid-tempo ballad “This Is It”, and a stirring, inspiring cover of Tori Kelly’s “Dear No One”, we are reminded again and again why Anthem Lights are one of today’s most respected bands ever, and why they’re probably here to stay for the many, many years to come!

Anthem Lights’ Better Together Mixtape is a brilliant work amongst a body of brilliant works in what is a varied, colourful and interesting career thus far. Despite maybe the tracklisting being too short, Anthem Lights nonetheless are able to reawaken in us the notion of worshipping Jesus through the simple yet effective melodies, though not necessarily mentioning Jesus by name. With their faith keeping them grounded, I am certain that this band will be within the CCM/pop industry for many, many years to come. Well done Anthem Lights for such a captivating and cheerful album, as we look to the future, and eagerly and actively follow all of the band members’ individual projects!

3 songs to listen to: In The Blood, What A Beautiful Name, Better Together