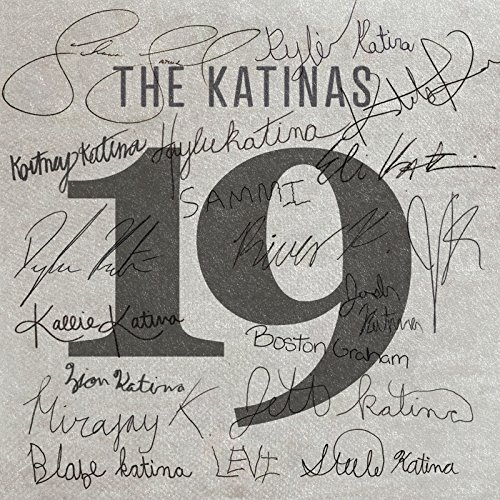 Consisting of 5 brothers of Samoan-American heritage, the former Gotee Records alumni band The Katinas have been recording pop/soul/CCM/worship albums since the mid-1990s. While it can seem like staying together as a band (with no lineup changes) can seem to be impossible (just look at current/former groups Audio Adrenaline, Newsboys, Kutless, Hawk Nelson and Group 1 Crew to name a few), these 5 brothers have stuck together since the group’s inception to bring us some of the best CCM melodies with a Pacific Islander music atmosphere, influenced by their own legacy and culture. While the band’s previous album was a little over four years ago with Sunday Set, a full length worship album that was able to showcase some of the most popular worship melodies sung on Sunday mornings, The Katinas have now released their brand new EP (well it’s not really new, the EP has since been released in February 2018!) full of both originally recorded songs as well as a few worship covers thrown in there for good measure. With the band of brothers (literally) showing a continued and renewed sense of poignancy and enthusiasm not just amongst these 8 songs, but throughout their whole music career thus far, if this this latest musical offering is anything indicative, the band has no intentions of slowing down, and maybe, just maybe, much of their forthcoming material could be their best yet! A must for any lover of Pacific Island worship/CCM music, or even fans of the gospel genre, from Nicole C. Mullen and Tori Kelly, to Mary Mary and Tasha Cobbs Leonard, these 5 brothers (all of whom have a last name of Katina) continue to assert their place within and around the modern CCM genre, reminding us that artists that have been around for a while can still nevertheless reinvent, to bring in more of a younger and relevant crowd. From songs like ‘Touch the Sky’ and ‘Waiting Here For You’, as well as their personal melody ‘19’, The Katinas continue to impact and influence, even if it is done through independent channels.

The first track on the EP, ‘19’ is as emotive and poignant as they get, with the band heartfeltly presenting a melody for their families, for their mother and each of their wives (from hearing the song and watching the corresponding video, it can be concluded that the Katinas’ matriarch isn’t with them on earth anymore), as the song presents a theme of thankfulness and edifying and lifting up the women in people’s lives that influence and change it for the better. With a steady percussion beat, and a heavy piano presence, the band present the raw and emotional nature of the track, with the lyrics ‘…how do I explain what I feel about you, it’s like the whole world stops with just the thought of you, your heart is gone, I hope you know, you’re my inspiration, you breathe life and love to the things that I do…’ As the band pays tribute to not only the woman that raised them, but also their wives who tirelessly and often thanklessly raise each and every one of their children, ‘19’ ought to be a song that we as a human race sing over the unsung heroes in our lives, especially the women that often work behind the scenes to hold families together. As the band channel some Bee Gees and ABBA vibes, not only through this song, but throughout the entire EP as a whole, The Katinas are certain to impact a generation that may not be as familiar or in touch with much 1970s music (which much of 19 sounds like at first listen!). Well done to these 5 brothers for such a poignant first track, and one that’ll hopefully pique people’s interest to keep listening to this 8 track EP, even if it is only once!

Throughout the rest of the EP, we see a myriad of musical genres that the band delve into, as well as some well known covers that we as listeners of CCM may have heard over the years. Song like ‘Touch the Sky’ (UNITED), ‘Jesus We Love You’ (Bethel Music) and ‘Waiting Here For You’ (Christy Nockels) have all charted success to varying amounts over the years, and all have been given ‘The Katinas’ treatment, and just like songs on Sunday Set way back in 2014, much of the covers on this EP portray more of a fresh and Pacific Islander flavour that would otherwise be lost and/or glossed over if any other artist covered such powerful songs. While the covers mean that within this track listing of 8 songs, a little under half are worship songs we know (maybe a few more originals to increase the consistency of this EP), the band nevertheless have reminded us of the power of these worship songs, that the impact these worship songs ought to have, should be able to translate beyond the person singing it. Still, the band show us their own take on ‘Jesus We Love You’, ‘Touch the Sky’ and ‘Waiting Here For You’, all of which are brilliant and impactful in their own way, as I encourage anyone who is a fan of worship music in general to check out the covers on both 19 and Sunday Set!

‘Peace, Love, Hallelujah’ is a melody along the same thematic lines as songs like ‘Love Liberty Disco’ (Newsboys) or ‘Love Peace and Happiness’ (Out of Eden) as The Katinas remind us all that we as Christians ought to strive daily for peace, love and the happiness that comes when we are content and full of the joy that comes from knowing Christ; while ‘Emanuelu’ presents one of the most honest and worshipful songs I’ve heard in 2018- as the band offer a song that can be sung on either Sundays or close to Christmas as the word ‘Emanuelu’ is presented, maybe meaning ‘Emmanuel’ in some sort of Pacific Island language. ‘When I’m With You’ is a love song the band sing to their significant others, as the music in this song in particular is more of a laid-down stripped back acoustic framework- yet though the song is sung by these men for their wives, we can nevertheless sing the song too, to the people in our lives and we may often take for granted (family, friends). The band round out the EP with ‘I Believe’, another single-like melody, as the band show us the importance of their own faith in their daily lives. The band aren’t afraid to share their faith, and ‘I Believe’ is a testament to their strong upbringing. And with words like ‘…no one like You, the only true God, You’re good, give strength to me, my song my melody, Jesus that’s who You are to me, Lord I believe in You…’, what’s not to love about this song?

Even without the label of Gotee Records, The Katinas have once again showed us an arrangement of both worship songs and originally written melodies, that can be easy to listen to, enjoy, sing along to, and worship alongside the band as this collection of 8 songs are some of the band’s best in years. A must for anyone who loves church music, worship music or any one of the many worship movements around the world, 19 encourages us all to worship alongside the people we love and to, on a continual basis, acknowledge them for the hard work they’ve undertaken for us to live a life full of opportunities and continual success. While much of the EP is a re-release from their 2017 EP Peace, Love Hallelujah, the band nevertheless have outshined themselves on the originally written songs. Well done to the band for this well-rounded EP, can’t wait till the next full length album release, whenever it may come!

3 songs to listen to: 19, Believe, Waiting Here For You