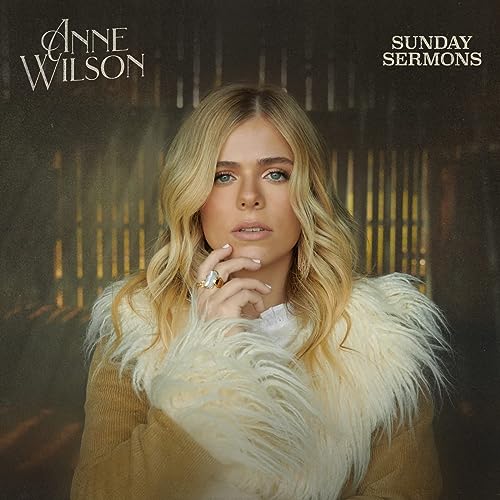 Anne Wilson has been on a rollercoaster ride of late. Since bursting onto the CCM scene with her chart-topping 2021 single ‘My Jesus’ (in was recently re-recorded with the addition of Crowder), Capitol CMG’s newest signee has been on the road to new heights. Anne’s ability to inject a sense of Christian/country into CCM is something to be proud of (as listeners)- while we’ve seen chart-topping CCM artists and country artists in years gone by, I don’t think I’ve really seen a country/CCM artist that’s been able to utilise their gifts in country music, to create songs that have highly resonated in CCM. I mean sure, Carrie Underwood is indeed a Christian but her primary ministry is within the country music sphere. Same with artists like Reba, Scotty McCreery, Dolly Parton, Randy Travis, Kenny Rogers, Hillary Scott and Lady A, Ricky Skaggs, Martina McBride, Tim McGraw and Kris Kristofferson. And yet we’ve seen all these aforementioned artists release songs throughout their career that have expressed their Christian faith. But it’s only very recently to see artists embracing their country roots and crafting their career within CCM, but still utilising what they’ve learnt in their life to create songs that can thrive on not only CCM but on country radio if the opportunity arose. Artists like Mallary Hope, Steven Curtis Chapman (recently he’s delved into bluegrass and folk with his album Where the Bluegrass Grows), Danny Gokey (earlier on during his career), Whosoever South, Rhett Walker Band, Crowder, CAIN and now Anne Wilson, that have created music that could easily succeed in both markets, while still providing a grounding message that focuses on the faith of said artist, and their own struggles, joys, celebrations and triumphs in their lives thus far. Anne Wilson is the most recent (on a list of many) artist to embody both CCM and country music, and so far, it’s worked. We’ve been given ‘My Jesus’, ‘Devil’, ‘Something About That Name’, alongside a live rendition of new song ‘No Place Like Home’ (maybe a studio version of the song is coming soon), as well as original Christmas songs ‘I Still Believe in Christmas’, ‘Kentucky Fried Christmas’ and ‘Just Because It’s Christmas’. Now as we venture into 2022, we see Anne deliver another powerful song destined to be as compelling and heartfelt as ‘My Jesus’. ‘Sunday Sermons’ released this past Friday (January 14th), and from what I’ve heard, I’d say that this song is fast becoming one of my favourite songs in 2022 thus far, rivalling songs like ‘Unsung Hero’ (for KING & COUNTRY), ‘When’s It Gonna Happen’ (Tenille Townes) and ‘On Repeat’ (UNITED).

‘…I’m so excited to share ‘Sunday Sermons’ with the world. This is my story of growing up in the church since I was a little girl. God used every Sunday sermon to develop a firm foundation in Him. I didn’t realize just how deep my roots were in Him from all those years of showing up to church each Sunday until I encountered hardships in my life. No matter what happens in life – even losing a loved one, I can always go back to that foundation of truth that the Lord planted in me through each of those sermons. This song is to remind you to cling to the One who’s consistent and faithful. Jesus loves you more than you could ever imagine…’

‘Sunday Sermons’ is a reminder to each of us to never underestimate how crucial and significant Sunday sermons are in someone’s life. Sometimes we think that someone’s faith hinges on a big spiritual moment, or with a time where they realise all the things that they’ve done wrong, and then they fall on their face, crying of Jesus. Yes, there are those big transformations a la Paul, and people do recall their ‘born again’ birthday, where they pinpoint a date when they surrender fully to Christ; but sometimes God doesn’t work that way. Sometimes there isn’t an actual time when the Lord works on your heart. Maybe it’s through years and years of listening to Sunday sermons. Maybe God chips away at your heart for a long period of time, and you grow in Christ that way. Maybe growing up in a Christian home solidifies people’s faith more than we think. Maybe, just maybe, God can use even the most inconspicuous Sunday sermon to allow ourselves to see what He wants us to see, about ourselves, Himself, others. ‘Sunday Sermons’ the song is a reminder that we must not place tremendous importance on the big moment in someone’s life, that just because someone has a ‘wow’ moment and they come to Christ in a profound way, doesn’t mean that someone else’s experience of growing up in a Chrsitian home and becoming a Christian that way, is anything less than valid. ‘Sunday Sermons’ places importance in the everyday, and that what was maybe assumedly something that people would’ve glossed over, could now be one of the things that firm up someone’s faith, especially someone who’s been listening to sermons for years and years. Well done Anne for such a personable and relatable song, maybe in a few months, it could eclipse ‘My Jesus’ to be my favourite Anne Wilson song ever? Only time will tell!