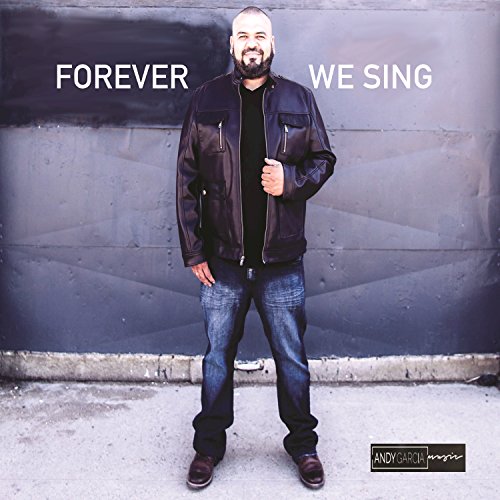 Andy Garcia (nope, not the actor!) is the most recent signing to Dream Label Group, whom have always had the uncanny ability to sign lesser-known acts, yet with the potential to become international superstars. But if you haven’t heard of Andy before, let me assure you that you are in for a real treat. Though you can read Andy’s biography on his website here, let me just say that Andy’s heart for Jesus is evident on his debut album Forever We Sing, and his passion and fervent emotion makes this album even more relatable and enjoyable. With a mix of original melodies and covers, Andy’s offering of 10 honest and worshipful melodies, has me dancing for joy and celebration, as I lift Jesus’ name high above all others, and praise Him for everything He’s done for us!

Opening the album is the explosive, high octane worship melody “Spirit Move”, originally recorded by Bethel Music. Brilliantly led by pulsating drums, stirring electronic synth and captivating guitars, Andy makes this song into his own, reminding us all that we all need to be ‘…fixed on this one thing, to know Your goodness and see Your glory, we’re transformed by this one thing, to know Your presence and see Your beauty…’. Because of everything Jesus has done, is doing and will do in our lives, always for our good and His glory; we can and should be able to (maybe not now but in the future!) proclaim God’s goodness, and ardently ask him to move in our hearts and in the lives of those who do not know Him. Revival can occur in even the most hardest of hearts, and Andy reminds us all that we can only do our bit, and leave the rest up to God.

Pure unbridled, intense and honest worship seems to be the trend on Forever We Sing, with plenty of covers showcasing Andy’s heartfelt devotion to Jesus, and the raw emotion that we normally hear when we are just in the spirit and not caring that much about performances. “Be Enthroned”, “Thank You” and “Furious” are the rest of the offerings covered from Bethel Music (apart from the album opener!), while “Heaven Fall Down”, originally recorded by Phil Wickham, is featured here as Andy does all of these songs justice, and then some more! “Be Enthroned” is a strings-led mid-tempo ballad delving into the ever-true notion of God being worthy because of His faithfulness and promises told years and years ago; while “Thank You” is led by the acoustic guitar and is a reflective and contemplative prayer earnest sung by Andy as we are blessed to hear such a stellar rendition of what I reckon is one of the most underrated Bethel Music songs ever. I was initially apprehensive at Andy trying his hand at recording “Furious” and “Heaven Fall Down”, as these are some of my favourite worship songs ever; yet these two versions are quite impressive- tweaked just enough to give these versions uniqueness and ingenuity, while staying close to the tempo and message of the melodies, that Jesus can bring the Kingdom to earth just as it is in heaven (“Heaven Fall Down”) and the fact that Jesus love is furious, relentless, and always pursuing us, even when we feel like we have messed up and don’t deserve his love (“Furious”). Yet it is the last two covers from Andy that really tug at my emotions and my heart.

No prizes if you guess that one of the two impacting covers on Forever We Sing is… “Death Was Arrested”! Yep, the song that has been covered by Aaron Shust, Laura Story and People Of The Earth, while also recorded by original artists North Point InsideOut. That’s 4 versions already, why does Andy need to record this song in particular? Well I am of the line of thinking that if a song is covered so many times, maybe God is trying to send a message, and imply that as long as the song is being covered, then there still something in this song that Jesus is trying to communicate to us, lyric or theme, or both. So maybe the correct question should be ‘How could Andy not record this song?’- for me and maybe for Andy it was something he had to and needed to do. As for this version of the song, it doesn’t deviate musically that much from other versions, but then again, it doesn’t need to- the track needs to sound the same musically every time it is recorded by someone different, I reckon, in order for the themes and the lyrics to shine through. “Death Was Arrested” probably will be the song to receive the most airplay at radio during 2017, partly because it has already been covered so much, yet there is indeed truth and a simple concept there- as Andy reiterates the simple yet emotional and honest message of Jesus delivering us from sin, and arresting death, so that we can have new life in Him. While the final cover, also filmed as the first music video from the album, is the Jason Crabb penned “He Won’t Leave You There”, an inspirational melody about God never leaving us and that ‘…there has never been a moment, there will never be a day, He’s not strong enough to rescue, He’s not strong enough to save…’. Jesus will never leave us in the valleys of despair, and this emotional ballad, though stripped down acoustically (unlike Jason Crabb’s full band version recorded a couple of years ago!), is definitely a standout as we remember the eternal truths of Jesus always staying right by our side.

Which brings me to the remaining three songs on Forever We Sing– the three originally written and recorded tracks. And this is where I reckon Andy shines the most, vocally and lyrically, as we marvel at what a great songwriter He is! The title track is a melody that I could envision being sung at Sunday services in the near future, and is cowritten with Salvador frontman Nic Gonzales, where Andy eloquently reiterates the fact that Jesus can ‘…be glorified, be lifted high, forever we sing You reign, to You we cry, be magnified, our King of all You reign…’– it’s worship at its simplest yet most effective; while “All Hail”, written by Greg Sykes and Michael Farren is a reworked representation of the timeless hymn “All Hail The Power Of Jesus’ Name”, sung against a vibrant backdrop of synth, remix effects and electronics- yet another worship melody that I find myself passionately singing along with Andy even after 10 seconds of me listening to the song. While the final melody from Andy is the album ender. “You And Me” is an acoustic guitar led love song written to his wife, and though not about Jesus, is the kind of song Jesus would sing to us because of His immense and unending love for us that defies boundaries. What a fitting ending to a near-flawless debut album that makes us think about God’s love and his devotion to us, even when we mess up and feel like we’re undeserving.

Andy Garcia may not be the most popular singer around the CCM industry right now, but he certainly is one of the most vocally unique and passionate singers currently. And if Forever We Sign hasn’t convinced you of his musical, lyrical and vocal prowess, then maybe you just need a little more time for his music to grow on you. Because Forever We Sing is one of my favourite worship albums of the year thus far. There’s just something special and magical about the tracks here. So what are you waiting for? Be encouraged, be inspired and just let go and worship our Father because of what He has done for us. I know I will, and will continue…until Andy releases something new of course!

3 songs to listen to: Forever We Sing, All Hail, Death Was Arrested