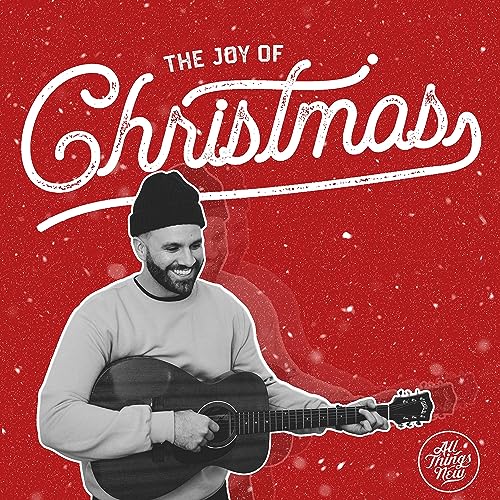 All Things New– The Joy Of Christmas EP (Amazon mp3/iTunes)

One of the bands that I instantly took a liking to when they debuted their self-titled debut album in 2013 was All Things New– with their hit single “New Man” speaking about how we as Christians are new men and women in Jesus, and we don’t have to live otherwise anymore. The song was freeing, the album was refreshing, and by the time the second album The Good News released in 2015, I was hooked and eagerly anticipating more music from lead singer Garrett Hornbuckle and his friends. Their sophomore album didn’t disappoint also, with songs such as “Believe” and “Can’t Hold Me Down” solidifying their imprint in CCM. Then the year after, after posting pictures of the band in the studio recording their third album, All Things New suddenly faded away. And I wasn’t sure what happened…until this past year. Similar to how Stars Go Dim has been ‘reborn’ with just Chris Cleveland, and Rhett Walker Band with just Rhett Walker; so too has All Things New with Garrett Hornbuckle. The group (with just Garrett as the one and only original member!) dropped their brand new EP Grace That Changes Everything a few months ago (which you can read the review here!); and with one listen of this vibrant and eclectic batch of worshipful pop tunes, and we can see that All Things New has the same message and heart as they did way back when they first started- Grace That Changes Everything (with the title track penned by Matthew West), looks to ensure that All Things New once again places their music firmly in our hearts, and never allows us to let go.

All Things New is now a one-man band in every sense of the word, but don’t let that fool you into thinking that this new incarnation isn’t any good. With Garrett’s effort on this EP of all-new songs being nothing short of remarkable considering everything he’s been through this past year and the journey he’s been on; All Things New is fitting to listen to even now while we are on lockdown and in quarantine. Yes, we can listen to Grace That Changes Everything over and over, and love that release over and over and over. Of this I am certain. But with Christmas In July in full swing, we can also listen to Garrett’s latest Christmas EP The Joy Of Christmas EP. Yes, yes, I know that Christmas is over. However just because we are not in the midst of the holiday season and the hustle and bustle at the moment; doesn’t mean we can’t dwell on the majesty and glory of our Saviour who was born 2000+ years ago. Jesus came to earth as a baby and saved us from our sins, so isn’t that something to be excited about and celebrate?

Unfortunately, though, I found myself pretty uninspired when listening to The Joy Of Christmas EP. Usually Christmas albums excite me, especially ones with original recordings- and this EP has 3 out of 4! However even though Garrett tries his absolute hardest, something falls flat here that I can’t really put my finger on. There’s passion here, no doubt about it, and it’s true that we are indeed reminded of the reason for the season, however other vibrant Christmas releases such as from Jason Gray (Christmas Stories), Michael W. Smith (The Spirit Of Christmas) and Pentatonix (The Best Of Pentatonix Christmas) all resonate with me at a much greater level. While I’m not sure as to what Garrett will do next in All Things New with regard to a new full length album; I guess what happens next doesn’t really matter. Jesus definitely showed up in Garrett’s life when everything was crumbling around him and gave him a new perspective and something else to focus on to bring Him glory. Grace changed the trajectory of Garrett’s life from one of confusion and despair to one of joy, celebration, new life and hope. Now that is something to sing praises about… even if this Christmas release isn’t the greatest! So now as we dwell upon the grace that changes everything, let us listen to these 5 new tracks from Garrett (or even the Christmas EP is you reckon that EP is impacting and inspiring. And may we remember that a new EP doesn’t need to lead to an album or a new successful and fulfilled career, given that this moment is enough- we are capturing a moment in time when Garrett is undoubtedly secure in his identity as a child of God and a musician. Well done Garrett; can’t wait to hear what is next from you!

3 songs to listen to: The Joy Of Christmas, He Has Come, Why Can’t It Be Christmastime All Year