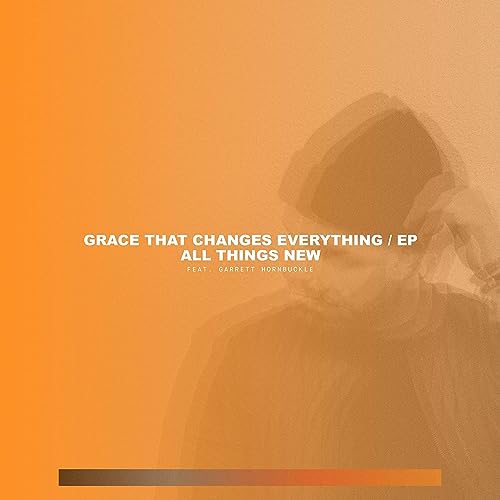 All Things New– Grace That Changes Everything EP (Amazon mp3/iTunes)

One of the bands that I instantly took a liking to when they debuted their self-titled debut album in 2013 was All Things New– with their hit single “New Man” speaking about how we as Christians are new men and women in Jesus, and we don’t have to live otherwise anymore. The song was freeing, the album was refreshing, and by the time the second album The Good News released in 2015, I was hooked and eagerly anticipating more music from lead singer Garrett Hornbuckle and his friends. Their sophomore album didn’t disappoint also, with songs such as “Believe” and “Can’t Hold Me Down” solidifying their imprint in CCM. Then the year after, after posting pictures of the band in the studio recording their third album, All Things New suddenly faded away. And I wasn’t sure what happened…until now. Similar to how Stars Go Dim has been ‘reborn’ with just Chris Cleveland, and Rhett Walker Band with just Rhett Walker; so too has All Things New with Garrett Hornbuckle. And as I quote verbatim a post on Facebook from the band early in 2019; we can see that All Things New has the same message and heart as they did way back when they first started- and the brand new EP titled Grace That Changes Everything (with the title track penned by Matthew West), looks to ensure that All Things New once again places their music firmly in our hearts, and never allows us to let go.

All Things New is now a one-man band in every sense of the word, but don’t let that fool you into thinking that this new incarnation isn’t any good. Because Garrett’s effort on this EP is nothing short of remarkable considering everything he’s been through this past year and the journey he’s been on. It almost makes the title track of the EP ironic that it’s about grace, which Garrett needed to fully grasp and accept in order for this new version of the band to move forward into where God was and is moving them towards. Grace is a concept that we all get and understand in our heads, but seldom do we sit and wrestle with the concept if things don’t make sense. And as Garrett eloquently proclaims in the chorus of the lead single that ‘…now I’m forever changed, by the grace that changes everything…You washed my sins away, now my rescued soul will ever sing of the grace that changes everything…’, we are presented with a glimpse of an understanding of what grace is and what grace does. It’s God’s gift to us so that we can be made whole and one with Him. It’s a gift so that we can have eternal life, and a gift that we don’t deserve, but God gives out anyway. And once we realise that it’s God’s grace that covers us every day and makes us blameless and spotless in Jesus’ eyes; then our lives can truly be lived in freedom and to the full.

The rest of the EP is just as compelling and inspiring as the year-old title track. Originally written by and recorded by Bethel Music, “Goodness Of God” is another EP highlight, as this mid tempo light guitar led worship anthem powerfully declares that God is good, that ‘…all my life You have been faithful, all my life You have been so, so good, with every breath that I am able, oh I will sing of the goodness of God…’– and though I myself enjoy Bethel Music’s live original version way much more, Garrett’s solid rendition is a very close second. “Sound Of Freedom”, co-written with Daniel Doss, is a typical simple yet effective worship anthem for the church, and a melody that I assume would be sung in churches everywhere in the near future, as Garrett passionately relays to us that ‘…this is the sound of broken hearts beating, this is the place where hurting finds healing, lift up a song of praise and sing it loud…’; while the penultimate track is the radio friendly CCM-esque “Not By Might”, where Garrett channels his inner Matt Hammitt and Sean Curran vocally, delivering probably one of the most vulnerable tracks on the album, highlighting that everything good thing happens in our life because of Jesus- and not by our own might, power and spirit. The EP ends with the powerful prayer and declaration “Good Intentions”, whereby Garrett fervently crying out his need to give God more than just good intentions- instead Garrett is prepared to give Jesus his entire life!

While I’m not sure as to what Garrett will do next in All Things New with regard to a new full length album; I guess what happens next doesn’t really matter. Jesus showed up in Garrett’s life when everything was crumbling around him and gave him a new perspective and something else to focus on to bring Him glory. Grace changed the trajectory of Garrett’s life from one of confusion and despair to one of joy, celebration, new life and hope. Now that is something to sing praises about! So now as we dwell upon the grace that changes everything, let us listen to these 5 new tracks with the appreciation that a new EP doesn’t need to lead to an album or a new successful and fulfilled career, given that this moment is enough- we are capturing a moment in time when Garrett is undoubtedly secure in his identity as a child of God and a musician. Well done Garrett; can’t wait to hear what is next from you!

3 songs to listen to: Grace That Changes Everything, Goodness Of God, Not By Might