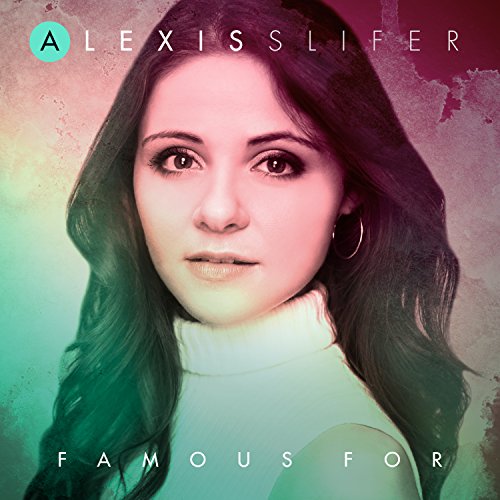 The Rubyz has been a part of the lives of many tweens and teens around the world for quite a number of years. With the formation of the band being that of providing young people with music and a means of expressing their love for Jesus, it is no doubt that with every band, members leave and members come in to fill the void. As with any group, members may feel like God is calling them to other areas, and with this original The Rubyz member, Alexis Slifer has been there since the beginning when the tween band started in 2008, when Alexis was a young teen herself. Fast forward until 2015 when Alexis decided to pursue a worship career (and three new faces entered in to continue the group The Rubyz), we see a young woman of God with much musical experience behind her, entering a new season of her life. So what should we make of her new song ‘Famous For’, her first original worship song, on the back of her successful EP titled Genesis (that consisted of worship covers like Beautiful Things, I Surrender All, You Reign and Lead Me To the Cross)? And while it may take us all a while to get used to Alexis singing outside of The Rubyz (considering that she has been there from the start, she is still considered by many to be the face of The Rubyz even now), Alexis’s new song is a great start for an artist that I reckon will become a great worship leader and songwriter of songs in the upcoming months and years to come. Still only in her 20s, ‘Famous For’, though it has taken a year and a half for it to come to fruition, is such a project of hers that has passion and enthusiasm all over it. A song to be thoroughly enjoyed by those who love worship artists like Meredith Andrews, Sarah Reeves, UNITED, or Chris Tomlin; expect to hear much more from Alexis and her solo music in the near future.

‘Famous For’ took me by surprise. If you think of worship music, and good worship music, you automatically think of songs like ‘O Come to the Altar’, ‘Ever Be’, ‘What a Beautiful Name’, ‘Wonder’, ‘Chain Breaker’, ‘Lion and the Lamb’, ‘Your Love Defends Me’, ‘The Cause of Christ’, ‘The Cross Has the Final Word’…those type of songs come to mind. But rarely will you think of ‘Famous For’, the song that released a month or so ago and that is fast becoming one of my own personal favourite worship songs of the year thus far. Maybe it’s because people associate Alexis Slifer with The Rubyz, and thus quickly bypass her music. Or maybe people just don’t know who Alexis is. Whatever the case, ‘Famous For’ isn’t as popular as the rest, and probably won’t be popular, not unless it somehow gets on radio and someone is impacted in a big way. Nevertheless, the song is heartfelt, meaningful, hopeful and raw, as Alexis proclaims through all the looping percussion, light percussion and strong acoustic guitar presence to ‘…make way through the waters, walk us through the fires, do what You are famous for, what You are famous for, shut the mouths of lions, raise dead hearts to life and do what You are famous for…’ God is in the business of changing hearts and impacting lives, and often, human bodies get in the way with our own agendas of what we perceive the revival of God should look and feel like. But God is not limited by us mere men. This song is a declaration for God to do what He is famous for…with or without us. If He uses us, fine, if not, then we have to be fine with that. God is still God whether He uses us as vessels of His love or not, and our identity does not rise or fall depending on how ‘useful’ we believe we are to God. Maybe it’s best that we move out of the way, and let God do what He is famous for. After all, it’ll give us some time to just sit and reflect, and maybe, worship alongside Alexis to this powerful song in the process!

Alexis travelling from pop to worship can seem like a difficulty for avid listeners of her material from The Rubyz, yet, ‘Famous For’ can prove to us that such a transition is in fact possible, and hopefully welcomed by everyone who can appreciate Alexis for the artist she is and the artist God wants her to be. The song is an anthem for anyone who wants to declare the fame of God and that God is famous for the things we often take for granted in this life- healings, the hope that is instilled in each of us to live out each day, the kind words we impart to others in order to encourage them in their daily walk called life…whatever the little moments are, God is in them, and He is famous for working through the people that we so often overlook to further His kingdom in a way that we would otherwise not think possible. Alexis and her song are a testament to such a message, as is her voice and hopefully her future in the CCM/worship industry in the coming years. Maybe a new album in the future with all newly written and recorded material? Not only just in ‘Famous For’ but throughout her latest EP Genesis (yes, the one full of covers) we can appreciate the talent of Alexis, and hope and pray that she has a well-rounded career as a worship artist in the upcoming years. Well done Alexis for such an encouraging song, can’t wait to the full length album full of originally written songs, whenever it arises.