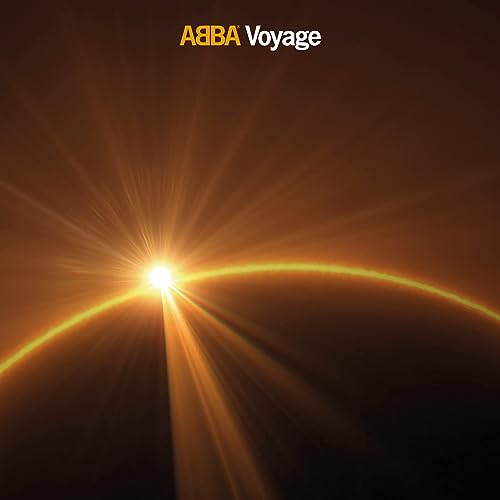 40 years. That’s how long it has been since ABBA (Agnetha Falskog, Bjorn Ulvaeus, Benny Andersson and Anni-Frid Lyngstad) have created a new album. Everyone didn’t think they’d be back with their brand-new album Voyage. I don’t even think that they thought it was even possible to make a comeback, themselves. In fact, if ABBA could make a comeback as they have with this album Voyage, then I guess any band could. And so, I’d have to say that Voyage would have to be one of 2021’s most anticipated, and therefore, because of this, the measure of which it has been reviewed and critiqued has been much more critical and downright blunt, because…well, there’s high expectations for this album. People have enjoyed it; and have thought that this comeback album from ABBA is one of 2021’s best. While others have felt that this album is seemingly too nostalgic, not keeping with the times; and feeling as though this group of songs aren’t as enthusiastic, passionate, or even ingenious compared to songs of ABBA’s past. Regardless of the polarisation in terms of the response to Voyage, what can be unanimously agreed upon is that ABBA’s work in music is still not done- and with a 2022 virtual tour around England to be highly considered; ABBA’s ability to allow the use of technology to bring together artist and fan alike, is what is going to be the selling point of this album in general. Because I believe, this is the first time that there’s a holographic music tour where the artists are actually living. Sure, there’s been a Whitney Houston holographic tour in 2020, and an upcoming Amy Winehouse hologram tour in the near future. But ABBA are living. Except because of their age, their can’t tour anymore. And so, the future of touring is ironically via holograms…which is what ABBA has done. There will be a tour in 2022, and it will look unique and different. And Voyage is just the beginning for ABBA 2.0, I reckon. Especially with the hype that this album has been given, then why won’t you capitalise on this moment?

My opinions about holographic tours are still fresh and raw in my own mind, and this ‘review’ wouldn’t really be the place to air this, but what I will say is this- my writing this, isn’t really a review. It is, per se, but let me say that there’s plenty of other ‘scathing’ reviews of the album out there for anyone’s consumption. ‘NO THANK YOU FOR THE MUSIC’ and ‘FULL-ON AND FROTHY’ are just two reviews by The Guardian that depict this new album by ABBA in a negative light, while superdeluxeedition.com manages to go in-depth into ABBA’s Voyage, reviewing the album song by song. What I will do here is to just say that this album is sure to split people down the middle- half the population will love this collection of songs, while the other half would still think that this band should’ve just had their last album 40 years ago. But for me, I’m a little torn. I respect ABBA, I really do. I’ve even started to enjoy a lot of their previous material. And I’ve enjoyed songs like ‘I Still Have Faith in You’, ‘Don’t Shut Me Down’ and the album-ender ‘Ode To Freedom’ on this album…yet other songs like ‘When You Danced With Me’ feel too much like the ABBA of old, so much so that the new generation (like myself and people younger than me) won’t probably touch this song with a ten-foot pole. The hard thing that ABBA has to do is to deliver songs that cater towards two different time periods. It has to carry along its listeners and fans from 40 years ago. And it has to create an album that is resemblant of where music is right now. And that can be a difficult thing to do- create something that people can relate to at the moment, while still be true to the sound that made you…well, you.

And unfortunately, either nostalgia and tradition are going to win out in the end, or ‘relevancy’ and ‘modernism’. It won’t be both. And that is where ABBA falls a little. It’s trying to cater to both markets- with songs like ‘I Still Have Faith in You’ being their next-big anthem, but nothing really else standing out lyrically and melodically across this 10-disc set. Nothing on the album (aside from the first single) really has a ‘pull’ factor like past-standout songs like ‘Dancing Queen’, ‘Take a Chance On Me’, ‘Super Trouper’, ‘Waterloo’, ‘I Have a Dream’, ‘Mamma Mia’ and ‘The Winner Takes it All’…quite frankly; on a holistic level, Voyage seems very forgettable and underwhelming compared to any of their previous songs. Which is a very big shame, because even though the album isn’t that bad (upon the first listen through, songs like ‘I Still Have Faith in You’ really stands out, while songs like ‘Don’t Shut Me Down’ and ‘Ode To Freedom’ are ok); the album isn’t great either.

I would’ve thought 40 years between albums allows the band to come into a well of creativity, but unfortunately; the worse thing for an album- much worse than an album being horrible, is an album being ho-hum, being ok. It’s like the band went in with a dual focus- wanting to appease long-time fans; and wanting to gain new ones. While you get songs like ‘I Still Have Faith in You’ that are great, you also get songs like ‘Just a Notion’, a song that feels like it was recorded in the 1990s; and seems out of place in the sea of pop songs at the moment. ABBA have let a lot of people down with Voyage, unintentionally though, and this album should be a reminder that sometimes its better to leave great artists in the past, because if they come back, in any shape or form; they won’t be like you remember. While it’s not ABBA’s intention to create an album that frankly doesn’t hold a candle to any of their previous work; Voyage is unfortunately forgettable when compared to their previous discography. Here’s hoping their new holographic tour is much better than this. Do you all reckon that ABBA deserve to create another album after Voyage? Maybe one to rectify this album? Only time will tell!

3 songs to listen to: I Still Have Faith in You, Don’t Shut Me Down, Ode To Freedom