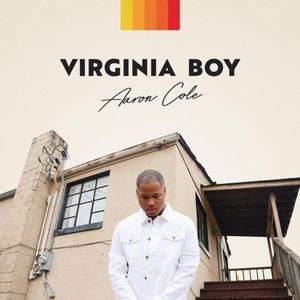 Recently signed to Gotee Records, Aaron Cole released his debut EP Virginia Boy this past May. With the bulk of Gotee’s roster having been ‘found’ by TobyMac (Finding Favour, Hollyn, Jamie-Grace, Ryan Stevenson), it was no different with Aaron Cole, a young singer/rapper and a songwriter that is literally out of this world. Personally, I don’t really listen much to rap and hip hop, yet objectively I can say that Aaron Cole is lyrically brilliant at rapping, and the production on his EP is top notch. He’s a guy that his a bright future in front of him, that’s for sure, and fans of TobyMac, as well as Group 1 Crew, Manic Drive and KB would love this new-ish release.

The lone ‘CCM representative’ on Virginia Boy opens up proceedings, as “One More Day” sounds like something Michael Jackson or Royal Tailor would musically record, with Aaron encouraging us to thank God for each day which is a gift from Him- we cannot know 100% certain what will happen in the future, therefore even living one more day is a blessing. In essence “One More Day” speaks about not taking the moment in front of you for granted- and instead of worrying about the future, we can rather live in each day to the full, looking for the moments and the conversations in each day that God wants us to point to Him. As Aaron sings and sings well, especially as he relays to us that ‘…now, I got air to breathe, I’m awake, my heart is beating for You, Your love is all I need, another day, I’m gonna live it for You, I’m giving thanks for another day…’; we are met with an artist that will go far in both the rap and CCM industry, and possibly the mainstream like NF before him.

The rest of the album channel less of the CCM of the first track and more of the rap similar to artists like NF, Andy Mineo, Lecrae and KB. “Handmade” isn’t as ‘rap’ as other melodies but it does have a solid beat and hook as Aaron eloquently relays to us that he’s not a perfect person and he’s just like the rest of us. In the verses Aaron invites us to take a look inside his day to day life, which is filled with plenty of busy activities and temptations- and in the chorus he lets us know that he’s handmade and God’s still working on him, which is comforting to know that we don’t need to place artists like himself on a pedestal. Jesus is the only perfect person there is, thus Aaron’s admission that he’s a work in progress is something that is fitting and what we all need to declare and admit, if not to the world, then to ourselves. “Parachute” is one of the most intense raps I’ve ever heard, as Aaron and guest vocalist nobigdyl expertly and fervently trade spits and bars, outlining their strong faith in God juxtaposed with their recent success and their journey in their careers- kind of like a testimony type of track that pays homage to many things in their past that made them who they are today as young men and as believers.

“And 1” is co-written with and produced by Derek Minor, as Aaron gives thanks for everything in his life, inclusive of his music success- as he lists of his achievements ‘…and one and one and one and one…’ all of them given over to God because it is He and only He that can make all things possible, as all things work together for the good of those who love Him…’. While penultimate track is the vulnerable and emotional “Proud”, co-written with Solomon Olds, as Aaron highlights to us that his own motivation for singing and rapping and making God’s name famous, is to make his parents and loved ones proud; and the EP ends on the title track, the piano led gospel infused heartbeat of the album- the reason why Aaron is doing what he is doing. And that’s to share the gospel of Jesus to anyone He can. Listening to this song makes me conclude that the EP closer is the highlight of the entire project, and I reckon it is fitting the end the project here, as we marvel at such a young man of God with such a big heart for Jesus and making His name renown.

So there you have it. Virginia Boy EP, which may be part of a bigger full-length album down the track. With Aaron Cole not being done yet in terms of recording songs (he has recorded 7 brand new singles since Virginia Boy EP, and counting!); sky’s the limit for this relatively new Gotee Records’ artist. So what are you all waiting for? Even if you aren’t a fan of rap, you can check out the album. You’ll definitely be blessed like I was, and I am sure that there will be at least one song you will resonate with.