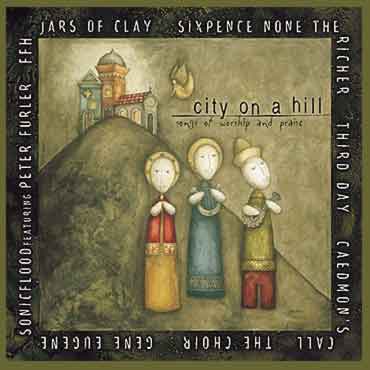 Hey there, I’m Matt, and I write reviews and design graphics for 365 Days of Inspiring Media.  Since Emily decided to write about her favorite worship song (“The Stand” by Hillsong United) for her first Worship Wednesday review, I thought I’d follow suit and talk about my favorite worship song: “God of Wonders” performed by Third Day and written by Marc Byrd and Steve Hindalong.

“God of Wonders” first appeared on, City On A Hill: Songs of Worship and Praise (2000), an album featuring a compilation of original songs performed by CCM super artists like Third Day, Sonicflood, and Peter Furler, who recently released Sun and Shield. City On A Hill album was one of the first CCM albums I purchased as I was fresh in my faith journey. Just to satisfy curiosity’s sake, the other 2 albums I purchased along with that album were Michael W. Smith: Worship and  WOW Worship 2002.

What I love most about “God of Wonders” is how it engages the listener from the moment you hit “Play.” The acoustic guitar intro draws you into an intimate place of worship. Mac Powell’s vocals begin with an amazing declaration of faith:

“Lord of all creation,

Of water, earth and sky,

The heavens are Your Tabernacle,

Glory to the Lord on High,

God of wonders beyond our galaxy,

The universe declares your majesty,

Lord of Heaven and earth…”

The lyrics declare who God is, what he has created, who we are in relation to God, and that he is set apart. Hearing these words in a song when I was early in my journey with Christ was a huge impact. I grew up with this idea that God was far away, distant, and unreachable. These words changed my heart, and affirmed the truth that God is big and we are small. God is in the depths of our hearts and in the furthest reaches of our comprehension and beyond.

It’s literally more than we can comprehend – yet it’s an idea that was delivered in Love, in a song.

Over a 12 year career leading worship in churches, I probably led with “God of Wonders” more than any other song. I chose it frequently, because it was sung the loudest. I would look out into the congregation, and see worshippers singing it passionately with their eyes closed and hands raised – no lyrics screen needed.

From a music standpoint, “God of Wonders” and the rest of the City On A Hill LP introduced me to a lot of really great CCM artists. I got into Caedmon’s Call, Third Day, Newsboys, Sonicflood, Leigh Nash, The Choir, and many others.

Admittedly, “God of Wonders” is a song that’s been around for a long while, but is still in rotation on Christian radio, is still sung in worship services at churches around the world, and remains in the CCLI Top 50 at #49. (CCLI)