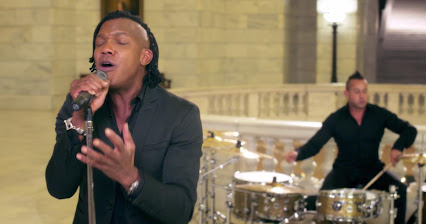 Gone are the days when you can appreciate music for what it really is- a song to be savoured, a song to be listened to again and again, with every listen a new meaning is imparted to whomever listens. With the advent of Spotify, youtube, iTunes, Amazon, Pandora and every other musical service at your fingertips, skipping songs seems to be the norm nowadays. Listening to a song to death, until another track comes along, seems to be all the rage, when in fact sometimes we are called to just sit and mull over a song more than usual. Often, we may be so hasty to move onto the next new song, that we may skip over things that God may even want to say to us. We may be in fact rushing so fast from one thing to the next (music is a clear example) that we may miss what God may have in store entirely. Which is why this new post for Sentimental Saturdays is about lament, lamenting that how we have listened to music in the past (really listening to the tracks, because without the ease of access of music, we are forced to focus on what the lyrics really mean for us as people) is sadly how listeners of music don’t listen to music now. We live in a now-centred (and me-centred) society, that any hint of anything taking longer than expected is shafted, for the new, quick and convenient.

We weren’t meant to take life at a quick pace. To hurry and rush means to miss what God may have for us, often right in front of us as we focus on things that may not necessarily be material in the long run. Music is a prime example. Now I know I may be guilty of this as well, but how many times have we skipped songs because ‘I’ve heard this all before?’ How many of us have religiously listened to an album to death, only to place it on the shelf for the next X years, because the newest album by this artist has released? Surely if an album is as good as we declare, it ought to be savoured longer than the average time it takes to savour music nowadays. Because as I see the pattern of music listening, not just in my life but in others as they listen to music in both the CCM and the mainstream industry; we consume music like no tomorrow. And by the rate we consume music, often the real effect and meaning of the music hardly ever takes effect in our lives because of how quickly we listen to the songs and move on to the next best thing.

Which is why these new songs I’ve been listening to for a while, Rachel Platten’s “Stand By You” and Newsboys’s “Guilty”, will be listened to by myself a little while longer. Because the more I listen, the more I know God speaks, and the more I am open to what He has to say to me, the more I can realise that music has the power to change lives, and inspire not just ourselves in a particular situation, but also inspire us to take action as we live out our lives in the presence of others who may not know God’s love and presence that is active in our lives as followers of Christ. I’ve already discussed the meaning of Rachel’s “Stand By You”, yet for those who may not have read my Message Mondays blog a little while ago, here’s a quick rundown- yes, this song is by a mainstream artist, yet I feel sometimes songs, like “Stand By You”, can be equally as powerful, emotive and God-breathed as any other song, because even if the artist may not know it, God could still be influencing, prodding, giving ideas and impacting society through music that unites.

“Stand By You” is a declaration, from us to our friends and loved ones. That while we may or may not find their own personal heaven (the place/moment where all is right with our friend, where they’re in a moment when all their troubles have dissipated), we will indeed walk with them during their journey, even if it means to journey alongside them through their own personal hell, whatever that may be. To boldly declare these statements as it is shown in the song requires faith and guts, requires even God’s help as we don’t judge our loved ones, yet walk with them on their journey for as long as it takes. “Guilty”, on the other hand, calls for us to take a stand for our beliefs, and while the song specifically delves into beliefs in God, this song is a reminder to stand firm in our core values as well- our moral compass and what we believe is right and wrong. Even if no one stands with us, will we be willing to stand, even if it means to stand alone?

Rachel Platten released her music video for “Stand By You” just yesterday, and with a gospel choir towards the end of the clip, we see her passionately sing, complete with a myriad of circumstances and situations that depict love in all its facets- between friends, family, boyfriends and girlfriends, all with a timely reminder that no matter what our relationship is with our loved one we are declaring this song towards, what matters is this- that we ought to stand by them, even during the moments when they believe they’re unworthy for anyone to stand alongside them. Uplifting and emotional, inspirational and at times confronting, Rachel has once again hit the mark with this track. And who knows, maybe I may not have received all this wonderful insight if I just pressed ‘skip’ on my iTunes playlist, or if I wasn’t just listening and consuming music because it is ‘there’. While in this generation, music is often a commodity rather than a work of art to be savoured and messages extracted for us to soak our teeth into (not literally), it is songs like Rachel’s “Stand By You” that make me have more hope for music in general- that a song be as ‘pop’ as what Rachel has delivered, that it can be as ‘hip’, ‘current’, and radio friendly, yet still have a positive and hopeful message at the end of the day.

We can be sentimental and lament about music all we want, but unless we ourselves change our patterns about how we listen to music from now onward, unless we’re not open to what music can often influence and speak to us with, our habits in listening to music won’t change that much. Newsboys, releasing “Guilty” as their theme song to God’s Not Dead 2, is a song that challenges the status quo. A song that makes us wonder and ponder- are we willing to pay the price for what we believe? Are we guilty about proclaiming love and peace to those we meet? Are we guilty as charged, and are we willing to champion that notion, and not be like Peter who denied his affiliation with Jesus when He was being targeted and questioned for being the Son of God? Tough questions, yet if we listened to music how we may have listened to it previously, we may not have even had any privilege of even contemplating such a question.

These two songs are vastly different musically, and even lyrically. One talks about standing alongside someone, and the other speaks about standing up for Christ. Yet both these songs have been instrumental in my life over the past few weeks and months. Each of these songs have reminded me that music needs to be constantly listened to again, if we want for further gain what God longs for us to believe. Songs are not commodities, and therefore aren’t to be treated as such. Just because a song is more than X years old, doesn’t mean that their effect and impact is anything less. What the past has told us is that how we have listened to music before ought not to be how we should listen to music now.

Which songs have impacted you throughout these last few months? Any mainstream/Christian artists that have impacted you in your walk with the Lord recently? Do you savour music, or are you more of a consumerist? (don’t worry, I consume music too, though I’m not that proud of it). Maybe it’s just my craze and obsession with Rachel Platten recently (I did write a Sentimental Saturdays/Message Mondays blog about “Fight Song” recently too), nevertheless, songs like “Stand By You”, and even Newsboys’s “Guilty”, are rare, and only come around every so often. A song that is timely and timeless, like these two, will have its impact months, even years later. If it’s true, then next time we hear a song on the radio that’s 10, even 20 years old, are we to press ‘skip’? Things to think about. Til next week, let us know in the comments about what you reckon about technological advancement, and how you believe that impacts on how we enjoy music as a whole. Til next time.