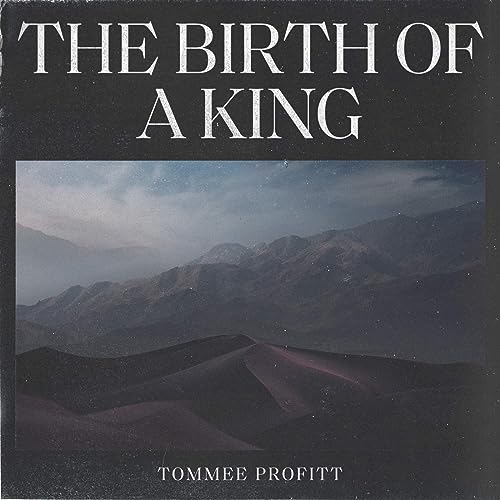 Tommee Profitt – The Birth of a King (Amazon mp3/iTunes)

I literally have had dreams of making this Christmas album since 2005, when I was in college. I knew that someday I wanted to do a BIG Christmas album, covering all of the main traditional carols, and putting my spin on them. I’ve actually tried to start it every year for the past several years, but I just never had time – too much on my plate! So this year, when the worldwide quarantine hit, I took advantage of the time to myself and dove right in… not realizing it would begin a six-month process with 17 different featured artists. As I was working on each song and arrangement, very specific voices came to mind. So I studied that artist’s range and put the song in a key that would be good for their voice, tailored each track for them, and completed all of the music/choruses/tracks before I even asked them! Thankfully, by the grace of God, every single artist said yes to collaborating with me, and I didn’t have to go with any plan B’s or second options. It was so cool hearing my internal vision for the songs come to life once the actual artists’ voices were recorded. They all delivered amazing performances of a lifetime – it was incredible… I’m so super grateful that people are finding the album and listening. The response has been far beyond what I had imagined, but not just by people liking the record, but by the way God is working through it. I’ve received messages and texts, from both strangers and friends, that have made me cry, sharing really powerful moments of how God showed up and changed someone’s life. That was secretly one of the missions behind this whole album. I don’t think people start listening to a Christmas album thinking that they’re going to be impacted by something powerful, but I felt very much like God was in this process, and even changed the direction a little bit of where I was initially intending to go, and I love that! I felt like this was an album that HE wanted to be made, so that He could offer hope to people at the end of 2020, arguably one of the worst years in history, and point them to worship Him. Or maybe even think about the story that sometimes gets brushed over in the midst of family, presents, and snow. People are desperate for hope today, and maybe because of this difficult year, they’re more open to receiving that hope. And maybe, just maybe, they’ll be hit with that surprise while listening to ‘The Birth of a King’…
There’s definitely a theme to this album. I thought about the traditional story of Christmas: “A King is being born, greeted by angels, who’s coming to save the world.” That is the most epic synopsis of a story that you could ever imagine! It definitely deserves an equally epic soundtrack, and that was our goal: To treat Jesus’ birth like a Lord of the Rings movie, while emphasizing the power and impact of His birth. However, through the process, I was aware of how people don’t want you to mess too much with their beloved classic carols, so I wanted to give people something that felt true to the timeless and classic songs, while also offering some completely reimagined arrangements. I also wanted the entire thing to still feel natural and non-distracting, so that was the challenge. I added choruses that felt like they fit the original time in which they were written, while also throwing in brand new arrangements that would be interesting to both 20-year-old gamer dudes, and 65-year-old moms. Those were the two audiences I had in mind when creating the album and figuring out how to bridge that gap of everyone in between… I hope that people continue to be impacted by an encounter with God while listening to this album. Some people have no desire for that, and that’s okay, and they can still receive the album the way they would by watching a movie and just appreciating the story and the production/performances. I think there is some amazing richness and depth to these traditional Christmas hymns, and I simply tried to extract the meat and emphasize some of the words and choruses, so that it stands out a little more when people sing along with these songs. How many times do we just sing ‘Joy to the world the Lord has come’ without even thinking about it? We just sing out of habit and the melody comes out of us as casually as if we were ordering a taco at Taco Bell, haha! But the message is powerful! The story is powerful! This is the greatest gift that has ever been given… and I want people to feel like they’re joining the angels in greeting this King, this Savior, that has come.

Tommee Profitt is a musical genius. There, I said it. You need not look too far to understand this- just hear this new album Birth of a King, from 1st track to last note, to agree with my very bold assertion, that Tommee is probably one of the most underrated producers of today, in both the CCM and mainstream circles. His full-length collaborative album, featuring singers and songwriters like We the Kingdom, Avril Lavigne, Rachael Lampa, Jordan Smith, Chris Tomlin, Fleurie, Tauren Wells, Crowder and Kari Jobe (to name a few), is one to savour and be in awe of, reminding us all that an epic birth of Jesus deserves just an epic soundtrack to accompany such a feat, and this album is the answer. Full of powerful anthemic moments, and featuring all-carols (and no holiday songs, emphasising the very true nature of what Christmas is really, really, truly about for all mankind), this is an album you’d want to get behind if you are a fan of soundtracks, musicals, or even anything else that Chris Tomlin and/or Passion do, musically. While I myself probably won’t do this review justice by writing any more than I can possibly write, I’ll leave it up to the experts to write a more nuanced, elaborate and poignant review, than I ever can- articles and publications like JesusFreakHideout, American Songwriter, even reviews on Amazon, will probably articulate what we all know to be true- that this album is one in a million, one of a kind. This is definitely well worth the 5/5 review, and what I can say in a few paragraphs, I’d just say in one sentence- buy this album. There it is- easy review. Drop everything you have (if you have a spare moment) and buy, yes buy, this album. You won’t regret it. This is cinematic and epic, all things that a score of a movie should be. And Christ’s birth looks like it can come out of a movie- to people the events of the night of his birth, can be seen as farfetched.

Nevertheless, this is one unique album that should get nominated for Special Event Album of the Year for next year’s Dove Awards. Tommee has done a stellar job at collaborating with all these guest vocals for this album, one that will forever be remembered as being an album- Christmas at least, that is probably one of the most musically diverse set of songs I’ve heard in quite some time. With songs like ‘Mary Did You Know’, ‘Hark! The Herald Angels Sing’, ‘We Three Kings’, ‘O Holy Night’, ‘Silent Night’ and ‘What Child is This’ (to name a few), this is an album for the people who want to worship the Lord during Christmastime, as this 17-track album reminds us all, in no uncertain terms, of the reason for the season. This is not your happy-go-lucky album. This is a ‘stop everything and listen and chew on these messages’ album. One that has taken us all by surprise
(in a good way). Well done Tommee for this album. Everyone go read the review of the album from JesusFreakHideout.com, listen to the album from start to finish, and be reminded of why Jesus came, and your value as people to Him, that He’d ever do such a thing in the first place. This is a must for anyone who loves CCM, epic soundtracks, movie scores, musicals, the whole lot. Now sit back and listen to this 17-track musical experience. You’ll thank me later!

5 songs to listen to: O Holy Night, We Three Kings, Joy to the World (He is Come), Mary Did You Know, Noel (He is Born)

RIYL: Soundtracks, Musicals, anything from Chris Tomlin or anyone at Passion