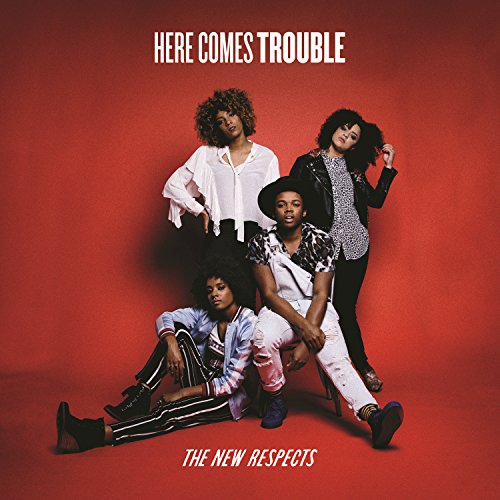 “…I think the biggest thing for us is we want to be in a space that invites anyone who wants to come to be there. That might not look like church, probably won’t look like churches, because not everybody believes the same thing. Our music isn’t set up to be a specific idea of something, but freedom — freedom and fun and family. Wherever that will be welcome, that’s where we want to go…” Essentially a quartet of family members (twin sisters Alexis and Zandy Fitzgerald, their brother Darius and cousin Jasmine Mullen- daughter of CCM powerhouse vocalist Nicole C. Mullen), The New Respects are definitely a band I would take note of this coming year and beyond. Ever since I heard their song “Hey!” which debuted last year (and sadly, that song is not present on their debut EP!), I knew the band would be something special, and one listen from their new EP Here Comes Trouble and you would agree with me too. Signed to Credential Recordings and Capital CMG, and hailing from Nashville, Tennessee; there’s no describing their genre accurately, as the three siblings and cousin stretch musical boundaries in hip-hop, soul, gospel, funk, reggae, blues, rock, and mesh them together to form a sound that is uniquely theirs, reminding me also of throwbacks to the 70’s and 80’s. So what’s my verdict on a musically diverse EP that I’m sure will garner the attention and buzz of listeners, fans and critics alike? Read on and find out!

Opening the thought provoking set of 5 songs is “Money”, a challenging, confronting, yet thoughtful and inspiring anthem reminding us that the love of money and transient things of this life can be very dangerous, as it could cost us relationships and the love from those around us. Led by pulsating drums, energetic electric guitars and driving bass, Jasmine ardently highlights the notion that ‘…life ain’t about money…’ eloquently reminding that the love of money divides, that ‘…the money you save can’t buy a day back from the grave…’. It’s a delicate topic that the band are delving into, as we ponder the reasons why we do what we do, and it’s the way the band tackle the meaty issues that make me marvel at their songwriting ability. “Frightening Lightning” is next and is sung against a gospel/soul musical backdrop, with plenty of grunging guitars and an 80’s sound that immensely catchy. Though the song is lyrically ambiguous, with plenty of metaphors; given the Christian beliefs of the four members, I can only imagine that the song is about the Holy Spirit invading our lives, and on the surface appearing to be like ‘frightening lightening’, but beautiful and life changing in the end. As Jasmine recounts ‘…frightening lightening, shake it, shake it, shake it, shake it right off my bones…well it lights up the night and it scares me, but don’t it feel good…’, I can’t help but compare Jesus to the power of lightening, and marvel at the fact that He is all powerful and all mighty, yet the magnitude at which he cares for us boggles the mind. Though the song could be about any other defining moment in life that is scary, but ultimately rewarding and life-changing also.

Probably the most comforting song on the album is the soul-infused, gospel focused, quasi-worship melody “Come As You Are”, reminding me thematically of Crowder’s song of the same name. As Jasmine eloquently sings out to a friend in need to ‘…tell me everything, don’t leave nothing out, I’ll be waiting on you, so come as you are, you don’t have to be lonely, you can count on me…’, we are left wondering whether this song is sung from God’s perspective or just a mate singing to another mate. But I guess that point is irrelevant, as either way, The New Respects have crafted probably one of the most inspirational songs this year in my opinion (alongside “Fearless” from Jasmine Murray and “Tears” from Matt Hammitt). “Shoes”, the penultimate melody from the band on this EP is a fun, toe tapping, groovy jazz/soul/funk track that reminds me musically of The Beatles or ABBA as the band encourage us to ‘…walk a mile in another man’s shoes…’ in order to have empathy and identify with our fellow brothers and sisters in Christ, as well as the least of these. Probably inspired by the Bible verse Matthew 25: 31-46, The New Respects provide us with more food for thought, as we are reminded that seeing from the other point of view is key, if we are to understand and identify with the people we are speaking to around us.

But if I were to point out one song to listen to, it would be the no-nonsense in-your-face rock anthem “Trouble”. The final song on Here Comes Trouble, there’s a vibrant electric guitar, powerful drum beats and heavy bass as the band channel their inner Switchfoot and Needtobreathe, eloquently sing to ‘trouble’ aka the devil, telling him to be gone out of our lives. Lyrically similar to Carman’s “Get Outta My Life” from way back in the 80’s, Jasmine, Alexis, Zandy and Darius have created a musical gem here, and one of my favourite songs period of the year (and will be in my top 10 songs come the end of the year!). There’s nothing much more to say about this amazing track, other than you have to listen to it, and be inspired!

“…I would say we identify as a band of Christians, not as a Christian band. … We have enough people, I think, writing songs about what each one believes, but we don’t have enough people willing to be like, “Hey, you know something that I don’t. I know something that you don’t. Let’s tell each other that.” … I think that’s why we have as much strife as we do now; it’s not really a hatred as much as it’s a lack of understanding between people. That’s where the arts are supposed to step in…” There’s not much more I can say about this amazing EP, that have already mentioned already. The New Respects have created a stellar debut (maybe the inclusion of “Hey!” would have made it even more awesome, but that’s nit-picking, and neither here nor there…), and there is no reason any one can give for them not to check out Here Comes Trouble. So no matter what genre you like, check out this EP now! You’ll be glad I encouraged you! Well done guys, I can’t wait to hear what God has in store for you all in the coming months and years!

3 songs to listen to: Money, Come As You Are, Trouble