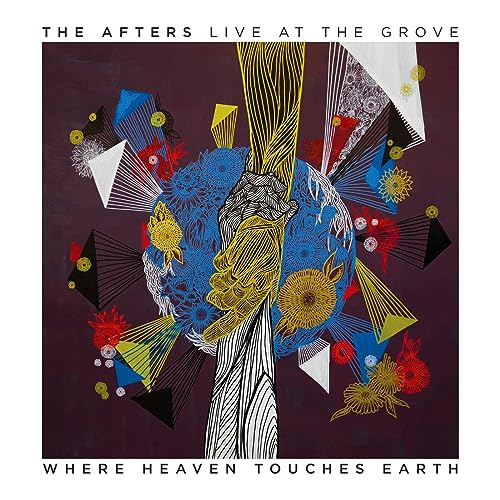 The Afters – Where Heaven Touches Earth: Live At the Grove (Amazon mp3/iTunes)

The Afters have been a steady and solid music force throughout the years. Borne out of Dallas Texas, and formed by lead singer Josh Havens and guitarist Matt Fuqua, the band have delivered songs that have touched the hearts of listeners all around the world, from songs like ‘Light Up the Sky’, ‘Every Good Thing’ and ‘Battles’, to ‘Live on Forever’, ‘Life is Beautiful’ and ‘Broken Hallelujah’, to name a few. Since signing to Fair Trade Services (then called INO Records) way back in the day, it was (and still is) their heartfelt melodies and inspirational lyrics that continues to give testament to their songwriting ability, as well as having the courage and bravery to make songs that somehow crossover into mainstream TV placements (music in ad campaigns etc.), over the years. 2019 saw the quartet release their brand new studio album Fear No More mid year, featuring singles like ‘Well Done’, ‘Lightning’ and the title track, while the band also delivered their Christmas single ‘Joy Unto the World’ in 2020 as well. While Fear No More received success (though not like the success of the previous albums Light Up the Sky and Life is Beautiful), The Afters still have reminded us that their songs continue to strike a chord with listeners around the world, regardless of sales and what happens commercially. Now here we are at the end of 2021, and we have seen the band deliver yet another music release, something else to tie us over until the next thing- a first for the band; a live album When Heaven Touches Earth: Live at the Grove. Maybe a live DVD in the future for the band?

Where Heaven Touches Earth: Live at the Grove clocks in at 10 tracks, and while it does feature a few standout songs throughout the band’s career thus far, I don’t think this album didn’t anything new or different that previous albums were able to create. Nothing against live material, but unfortunately, this album wasn’t all that special or even unique, even though the songs themselves are poignant, emotive, and decent enough from the band overall. Josh Havens, Matt Fuqua and the rest of the band deliver 10 songs- nine that we’ve heard before. Songs ‘It All Starts Now’, ‘Lightning’, ‘What Home Feels Like’, ‘Well Done’ and ‘Fear No More’ are all from the band’s 2019 album Fear No More (of which I wrote a review here), while songs like ‘Lift Me Up’, ‘Broken Hallelujah’, ‘Shadows’, ‘Moments Like This’ and ‘Light Up the Sky’ all reminds us of the empowering musical catalogue the band has been able to unveil over the years. There’s only 1 new track on this album- the title track ‘Where Heaven Touches Earth’; a song about wanting to express love for others, with the heart of the Father, and seeing people through the eyes of our Saviour. The song is a great reminder for us to actively pursue a life where our actions and deeds back up what we say, and for me, is arguably one of the brightest sparks on the album as a whole.

The album is ok…but it’s not really groundbreaking. And that’s a little unfortunate because I know the calibre of the band. Maybe it’s because The Afters isn’t really one of my favourite bands- they’re good, but I’ve always felt more connected to artists like Switchfoot, Skillet, for KING & COUNTRY, Tenth Avenue North, Casting Crowns, Delirious? and MercyMe…so I guess I was a little indifferent to this live album from the start, and maybe that influenced by enjoyability of the album. Whatever the case, 10 songs in a live album of an artist that doesn’t bring much of a big deal to the table (in my opinion) is what makes me rank this album 3. The album is good…but I’d check out their other studio albums first. Maybe if the album was 16 or so songs, and included tracks like ‘Every Good Thing’, ‘Life is Beautiful’, ‘Live on Forever’, ‘Battles’, ‘Beautiful Love’, ‘All That I Am’ and ‘Eyes of a Believer’; then maybe, I’d give this album another chance. But as it stands right now, I’d check out the band’s individual studio albums, and only listen to the new track, before I listen to this live album from start to finish.

There’s not nothing really new that the band should’ve been bringing to the table…except this album was everything that the album shouldn’t have been. If there’s not much distinguishing between the live and studio version of the songs (all except crowd noises at the start and finish of these songs), then maybe, just maybe, this live album isn’t as live as we first think. Regardless, at least the band is coming out with an album after around a couple of years. Does that mean that ‘Where Heaven Touches Earth’ is from a new studio album coming out next year sometime? Only time will tell. What I will say is this- this album isn’t as enjoyable for me as it may have been for someone else. And that’s ok. Maybe the band’s next album is more energising. One can only hope!

3 songs to listen to: Where Heaven Touches Earth, Well Done, Light Up the Sky