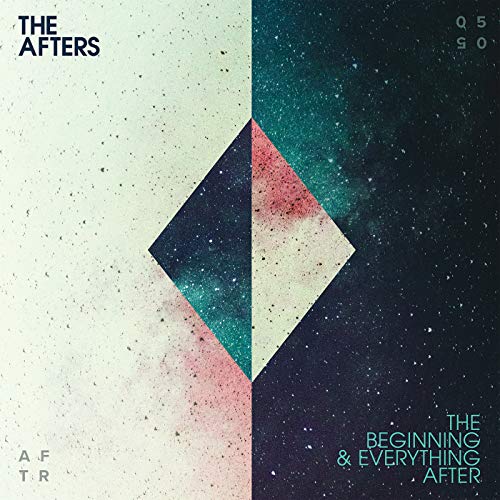 The Afters– The Beginning & Everything After (iTunes/Amazon mp3)

The Afters have had a steady and solid music career thus far. Borne out of Dallas Texas, and formed by lead singer Josh Havens and guitarist Matt Fuqua, the band have, throughout their career, delivered songs that have touched the hearts of listeners all around the world, from songs like ‘Light Up the Sky’, ‘Every Good Thing’ and ‘Battles’, to ‘Live on Forever’, ‘Life is Beautiful’ and ‘Broken Hallelujah’, to name a few. Since signing to Fair Trade Services (then called INO Records) way back in the day, it was (and still is) their heartfelt melodies and inspirational lyrics that continues to give testament to their songwriting ability, as well as having the courage and braveness to make songs that somehow crossover into mainstream TV placements (music in ad campaigns etc.), over the years. Much of their songs from their career have spoken to myself about my own faith and walk with Christ, as Josh and co. provide moments of reflection and others of rousing declaration as The Afters themselves are indeed one of Christian music’s most underrated bands there has been in…well, I reckon ever! Now as they venture into yet another musical moment, with another studio album slated for a tentative spring release 2019, what ties us over till then is a best-of project- celebrating the years that have gone with a snapshot of their music career thus far. With this project being labelled The Beginning & Everything After, this collection of 12 songs are a must have if you are a fan of the band itself, or if you are a newcomer and want to listen to an album with a lot, if not most, of their standout hits from inception till now.

One glance through the song list on this best-of project, and we can see that obviously, 12 songs are not enough (well, 10, because two of them are actually new songs) to convey such a solid and sturdy music career these four men have had. With their career spanning over a decade, and 5 albums of 10 or more songs in each, to shorten the songs down to ten of the best are mere impossible. But nevertheless, the band have given this track listing a good stab, as at first look, we see many hits over the years that have impacted us- from chart topping ‘Light Up the Sky’ from the album of the same name, to the ever-poignant melody ‘Life is Beautiful’ that could’ve been released on mainstream radio (and it to do actually well!)- a song that was the official credits song on the 2012 indie movie October Baby. Then there’s the more recent songs in ‘Battles’ and ‘Live on Forever’, alongside the older songs ‘Never Going Back to OK’, and their debut song ‘Beautiful Love’. This twelve song album is just enough for anyone who hasn’t heard of the band, to sink their teeth into, and then move on to check out their whole discography, because while this best of album is a good start for anyone who wants to begin their journey with The Afters, this album isn’t your one-stop shop for all things The Afters– first of all, aside from the new songs, one cannot gloss over a whole career in just 10 songs, for that to be the case, some songs would’ve missed out from being in the track listing- ‘What We’re Here For’, ‘Ocean Wide’, ‘Eyes of a Believer’, ‘We Won’t Give Up’ and ‘All That I Am’ are sorely missing, to name a few. Nevertheless, whichever way you look at it, 12 songs (inclusive of the new songs) is too short for a best of project. But still, this is not a bashing session. As individual songs, these melodies from such an underrated band, are great. Just this album seems a little redundant, if only to promote ‘Well Done’ and’ Fear No More’.

‘…the message behind ‘Well Done’ is something that’s been on my heart for a while. I lost my dad to cancer about fourteen years ago and there’s been a void in our family ever since. I think about it every time my kids have birthdays. I think about every time we have family gatherings. This past year, it especially hit home when two of my sisters got married. I had to walk one of them down the aisle and I actually officiated at the other one’s wedding. I just thought the whole time about how my dad would’ve loved to be there. But as I looked around, I realized that my dad loved Jesus, and because of that he showed his family what it means to live a life in pursuit of Jesus. Because of his impact, me and all my siblings love Jesus. What a legacy! It was a reminder of how important this life is and that the things we do here on earth really do matter. Someday – when this life is over – we’re going to leave behind all the pains of this world, all the suffering and we’re going to go before our creator. I really want to hear those words, ‘well done, my good and faithful servant.’ I hope this song is a comfort for those of you that have lost someone you’ve loved and is a reminder of how important this life is…’ In essence, this quote above is the story behind ‘Well Done’. And so, what more can I say? Such a song like this is fast becoming one of my favourites of 2018 thus far, and I’m sure, if WOW Hits executives have any sense, that ‘Well Done’ is a shoe-in on WOW Hits 2020…but I have been wrong before. The song itself is worship at its core, longing to be in the presence of the Lord, and living a life where God can look us in the eye come time for us to move from this life into heaven, and say to us ‘well done’. For us to be acknowledged as faithful stewards here on earth, with whatever gifts and talents Christ has given to us; there is no greater gift than to live a life, knowing full well that whatever we have been given has been put to good use here as we live this brief short stay on planet earth. Then there’s ‘Fear No More’, the other new song on this track list. While the melody itself sounds eerily similar to that of Sanctus Real’s ‘Confidence’, what the band have brought to us is a melody to declare and sing during times where fear seems to be rising deep within us. While there have been many songs that speak about the topic of fear, The Afters have still unveiled a song about fear, or rather, a song that declares for us to fear no more because of Christ. Josh and co. have presented the song with a lot of fervour and heart, and if any more of their new material is just like these two songs I’ve heard, then this new album from The Afters slated to release in 2019, would probably be one of the band’s very best!

There you have it…The Beginning And Everything After. A best-of project that provides to us a glimpse into one of CCM’s most underrated in about a decade. Yet this 12 song album is only just a glimpse, as many songs throughout their career have not seen selection for this album, be it intentional or not. Nevertheless, this is certainly an album for any collector of The Afters’ projects, or any listener of CCM who wants to branch out an hear The Afters for the first time, but don’t know where to start. Nevertheless, this project is only just the beginning for these four men from Texas- with their new album slated to release next year, then this new project is certain to give us all the anticipation we need come Spring 2019!