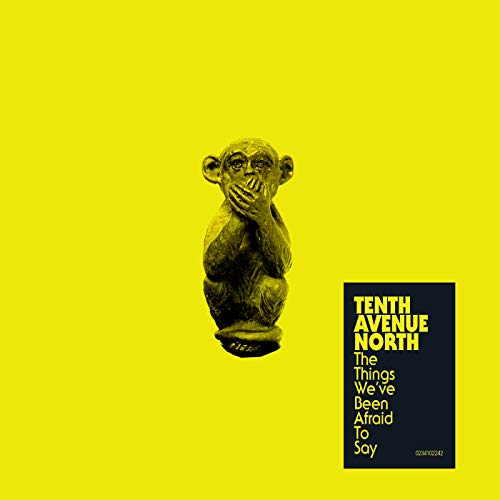 Tenth Avenue North have always been a band never to shy away from singing songs that have been uncomfortable to hear, for some reason or another. They’ve been a band to wear their heart on a sleeve, to sing about topics that one would otherwise sweep underneath the rug and never look at for a million years. They’ve been a band where, for lack of a better word, they’ve almost been stereotyped and fit into a box, wherein the box shows us that here is a band not afraid to speak up against and about things that are not your typical social norm topics. They’ve been a band over the years that have encouraged many, myself included, on their journeys with the Lord. Tenth Avenue North, arguably one of CCM’s most lyrically vulnerable and heartfelt in today’s genre of music, have always been the band that any listener could go too and be lifted up and be encouraged, whenever they need some guidance and direction in their lives. And then they release an album (well, if you want to be technical, it is an EP!) titled The Things We’ve Been Afraid to Say. And then you think to yourself, ‘hang on, are you telling me that there are some things in the band’s professional and public life that they haven’t really said yet, to the public? How could they, they are artists, visionaries, they are ____ (fill it in, be it idol, role model etc)’. We start to think and wonder. And then we realise- the band is great, maybe even some of the most innovative and visionary CCM groups to go around nowadays. But even some of the most highest regarding bands, like Tenth Avenue North, will always have things that they themselves haven’t discussed with anyone…until now that is. Released today, the band have unveiled 6 vulnerable melodies and heartfelt songs that I’m sure anyone who is anyone who is human being, can relate to. Songs that discuss heavy topics like being attracted to someone who isn’t your spouse, politics and religion, sexual abuse, lust and pornography, loving the person and speaking up against the action, being faithful to family when we’re in the process of being led astray, the shame the comes with keeping a secret and wanting the light to desperately come in and unveil the secret before it weighs heavily on you…heavy stuff, right?

Mike Donehey and co. have always been a band that never shied away from the uncomfortable, but still provided us with great quality music to listen to. Songs like these songs in The Things We’ve Been Afraid to Say, have now allowed us such a space to discuss heavy issues amongst ourselves, and have given us a platform and a way forward, as we think, ‘gee, if a singer as highly respected as Mike is singing about a struggle with porn, then yes, it is ok if we have such struggles also’. An album like this shows us that vulnerability isn’t something to be ashamed about, nor is it something to shy away from. But rather, when we open up and be honest, real and speak the truth, we are encouraged through love and grace that we have the permission to be honest also, and to not be judged or shunned because of it. Herein, this new album from Tenth Avenue North, probably won’t do that well on Christian radio, because…well, when have you ever seen a successful radio hit discussing themes expounded on in this collection of 6 tracks? Nevertheless, Tenth Avenue North have soldiered and forged on to create a collection of melodies that are certain to touch the soul and open our hearts to rediscover what it means to be honest and real in the everyday lives we lead. A must-have if you are a fan of Tenth Avenue North, or if you’re a fan of music in general, this is a musical moment that you don’t want to skip. Listen, every word, every line, no skipping, from start to finish. I’d say this EP is my favourite EP of the year, maybe even my favourite EP since…Nichole Nordeman and her emotive and heartfelt EP, The Unmaking, way back in 2015!

‘…to say I’m proud of this record would be a massive understatement. I said to a friend last week, “this is the first record I feel like I’ve finally let go of needing it to be successful.” He countered, “No, I think you’ve just redefined what success looks like.” That’s it. In Luke 6 The Message version sums up Jesus’ words to the Pharisees this way; “Your task is to be true, not popular.” If I’m honest, to this point I’ve refrained from singing about certain taboo topics simply because I couldn’t see how those songs would end up being largely celebrated. I forgot Jesus’ words. Subconsciously perhaps, I went from telling the truth, to selling it. What I think I’m realizing is sometimes Jesus might ask you and me to say things that will increase our influence, but there will also be times He’ll ask us to give up some of our sacred influence in order to speak the truth. Or maybe I should say, He’ll ask us to go deeper with a few instead of shallow and wide with a multitude. Isn’t that how He did things? “The Things We’ve Been Afraid to Say” I’m pretty sure, will not be our most “successful” record in terms of awards or radio or sales; but I deeply feel in my bones it was the record we were meant to make…’ It is with this quote that I have much more respect for the band- not that I didn’t have any respect for them before, it’s just that now, there’s a much more admiration as I watch Mike and co. deliver songs that are in fact taboo, as we’re reminded that as Christians, we ought to be in a space where it is ok to speak up about things that tug at our hearts, be it heavy topics, taboo topics, topics where we could be judged…and know that even if people judge us, it’s ok, because we know ourselves that by unveiling things and topics that aren’t necessarily ‘mainstream’, we are giving permission for others to come forward with courage and speak about things as well.

Many, many topics are brought to light in this EP- and thus, with the devotional videos from Mike that discuss all these 6 songs in detail, what I write about these songs will in fact be minimal, if not much at all, but what I will say is this- songs like these on The Things We’ve Been Afraid to Say don’t come every so often, and when they do, we ought to sit up and take notice. For a band to discuss the topics they have, and for it be with such grace, allows everyone who hears it to champion them as well, and to move alongside the band and welcome in a new era, where we aren’t afraid to unveil things about ourselves that we consider ugly, different, dare I say unlovable! The topics discussed on this EP are many. ‘Covenant’ showcases the theme of being attracted to people that aren’t our spouses, while the burden and the hassle of secrets, and our desire to want to be rid of them, is unveiled through ‘Secrets (Light Shine In)’. Then there’s the struggle with pornography addiction (‘Counterfeits’), the ability to love and not pass any kind of judgement in an age where everyone seems to be political and divides and cuts off relationships based upon people’s political beliefs and hidden agendas (‘Love Anyway’), and the ever so delicate topic of sexual abuse (‘I’m Listening’) and the fear felt by many affected when coming to the public with their own stories. Especially in such a movement in today as it is with #MeToo; such a topic like sexual abuse is told with such poignancy and dignity in ‘I’m Listening’, a song that champions us to listen over speaking and even passing judgement upon victims themselves. Even the song ‘Afraid’ (originally on Followers) is present on this EP, and I reckon for the topic of the song to be us not wanting to be afraid, in general; the song slots right at home in this 6-track list. Well done Mike and co. for such captivating songs, hope these melodies are life changing to people as they have been for me as well!

The Things We’ve Been Afraid to Say is an EP that, although short in terms of number of tracks, is anything but. Full of lyrically rich songs that are heartfelt and impactful, this collection of six tracks are arguably some of my favourite that I’ve heard ever since 2012’s The Struggle. Mike and co. have delivered some hard-hitting melodies that tackle the most taboo of taboo…let’s just say that listening to this album is not for anyone who just wants a happy-go-lucky run of the mill pop album. Because a simple pop album this is not. Tenth Avenue North have pulled out all the stops with this EP, and what has resulted is an experience like no other. From songs like “Counterfeits” to the re-release “Afraid” and the potential radio single “Love Anyway”; no one, and I repeat, no one, will leave this experience, after hearing tracks 1 through 6, unchanged. A must-have for anyone who enjoys music in general, Tenth Avenue North have wowed us again with The Things We’ve Been Afraid to Say. Well worth the 2 year wait, Mike and co. have continued to allow spaces for us to be real without condemnation, and a space created with this EP is no different. Well done guys for such an impactful and poetic, poignant and life-changing EP, can’t wait for the impact in people’s lives in the upcoming months ahead!