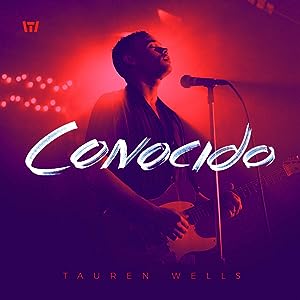 ‘…I just heard a great example of this from my pastor. Ministry is not a call to a pedestal, where you get to be celebrated by everyone else. Ministry is a call to the trenches, where you get to fight battles alongside everyone else. It is a calling to people. It’s easy, I think, for artists to get so wrapped up in the artistry that we can lose the ministry if we’re not careful. It can be all about the gifts and not people. I love that God is gracious in that He gives gifts freely to be people to be used in different contexts of life, but Jesus didn’t die for our gifts. He died for people. Our gifts are just vehicles to get us to people, so we can introduce them or reintroduce them to the reality of who Christ is…’ Since Royal Tailor moved on and each band member went their separate ways not too long ago, lead singer of the band Tauren Wells continued to make music, and his first solo full-length album Hills and Valleys released in 2017 with much critical and commercial praise and acclaim, with singles being spawned from the album, from ‘Hills and Valleys’ and ‘Undefeated’, to ‘Love is Action’ and ‘When We Pray’. His heart to bring to the fore great music with heartfelt moments of hope and encouragement, coupled with the fact that is music is every bit as relevant and up-to-date compared to the continual pop circulating on mainstream radio at the moment; is what I reckon has continued to propel Tauren to greater heights ever since his solo debut album release a couple of years ago. Now here we are in 2019, and before Tauren releases a new album (whenever that is), we see yet another radio single of his become popular and impactful- this time, ‘Known’, a song that I reckon can be as inspiriational, as ‘Hills and Valleys’!

With this EP standing at 4 tracks, each of them ‘Known’ but recorded differently (a Spanish Version, a normal English one, a Spanglish one, as well as a new special recording that was used for a music video); Tauren invites us to partake in what I reckon is one of his most vuilnerable songs he’s ever written in his career! As he divulges in a behind-the-scenes editorial, ‘…”Known” was inspired by a quote from Timothy Keller that says “to be loved and not known is comforting but superficial, to be known but not loved is our greatest fear. But to be fully known and fully loved is a lot like being loved by God.” It is amazing to me that God could see my in my entirety and love me fully. That is ridiculous grace, as the song says, and yet He loves me so much that He confronts me with His truth so that I can become more like Him. That is very special….’ And it is because of this quote that I have thoroughly enjoyed the song as I’m reminded that I am indeed known fully and loved unconditionally, regardless of what I may believe at any certain point in time. With the song being nominated for this year’s Grammy Awards as the Best CCM/Gospel Song of the 2018 period (though it didn’t win- the honours was with Lauren Daigle’s ‘You Say’); Tauren’s ability to craft a melody as equally vulnerable as it is tranquil is a feat in and of itself. Add to the fact that there is a Spanish version- to include brothers and sisters from Mexico and other Spanish speaking countries, alongside a further stripped-down recording (a la the music video audio version); Tauren’s best selling song, I reckon, next to ‘Hills and Valleys’, is what I reckon will continue to encourage Tauren to challenge himself and take to new heights whenever his new album comes into fruition, whenever that may be!

‘Known’, originally from Tauren’s first solo effort Hills and Valleys, is nothing short of powerful and unique, as he continues to remind us that to be known and loved is something we all as humans should strive for, knowing full well that God Himself offers to know us and love us without condition or anything in return. Just like how Peter Furler continued music after his own departure from the Newsboys, so has Tauren Wells shown us that his time serving the community and ministering to others through music is not done yet, even though Royal Tailor is no more. One of my favourite songs from his debut album? Most definitely. A song that will hopefully encourage millions in their own walk with the Lord as well as challenge even preconceptions about being loved and known without any attachments or even pre-requisites; this is a must listen if you enjoy all of Tauren’s previous songs, or if you enjoy other similar artists like Royal Tailor, Anthem Lights and indie rockers Abandon. Well done Tauren for such a powerful and emotional song. Can’t wait for whatever the Lord decides to bring next!