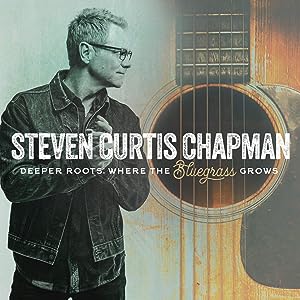 Note: Italics: Songs that have been previously released on SCC’s 2013 album Deep Roots

Steven Curtis Chapman needs no explanation, nor any introduction. He’s just known, full stop. For songs like ‘Dive’, ‘Speechless’, ‘Live Out Loud’, ‘When Love Takes You In’, ‘Cinderella’, ‘All Things New’, ‘Glorious Unfolding’ and ‘Do Everything’ to name a few; Steven has had a whirlwind of a career, and a very public view into his private life when around 10 years ago, his adoptive daughter Maria Sue Chapman went to be with the Lord in 2008, after a tragic car accident at the hands of his biological son, Will Franklin Chapman. Regardless of the circumstances, the Chapman’s as a family were thrusted into the spotlight, and how they handled such media attention has only been with the grace of God and the ability to stand firm in His promises, regardless of what the family was feeling at that moment. Fast forward to 2019, and Steven is still creating music, albeit this release is unique. Since releasing his Cracker Barrel exclusive 2013 album Deep Roots, an album full of bluegrass, acoustic and folk music that journeyed along the frame of hymns and reimagined classics from years gone by, Steven is now at it again, this time in 2019 and the album is titled Deeper Roots: Where the Bluegrass Grows.

For anyone who is an avid fan of Christian music as myself, Steven’s music is to be accepted with intrigue, excitement and wonder, knowing that Steven himself is perhaps one of the most prolific and influential Christian artists, ever- longside others like Amy Grant, Michael W. Smith, Jars of Clay, Audio Adrenaline, Carman, Delirious? and DC Talk, all whom have had their rise to prominence in the 1990s. Even now, as many such artists aforementioned have either released albums less frequently or have departed the music industry altogether, Steven’s durability in a music world where artists come and leave it at the drop of a hat, is nothing short of miraculous and a testament to the quality of his music as a whole. Well into his 50s, Steven doesn’t look like he’s slowing down, and why would he? With many chart-topping songs spanning more than 30 years; we have been blessed to listen to one of Christian music’s most humble and poignant singer-songwriters, an artist that any artist who is to be venturing into Christian music, should look up to. And now all those years later, Steven has delivered an album that, though technically not an album full of new material (excluding ‘Remember to Remember’, his last album full of all-new original material was 2016’s Worship and Believe!), is one that can hopefully tie us over until whenever there is one, hopefully coming to us sooner than we all think.

Steven’s new album, looking at it one glance through, looks oddly familiar. And that is because…it is. Since it’s been 6 years between Deep Roots and Deeper Roots: Where the Bluegrass Grows; people may have forgotten the 2013 album. It’s only physical release exclusivity to Cracker Barrel Old Country Stores across the U.S. sadly didn’t help Deep Roots’ cause, and while for me I’ve loved the 2013 album, 6 years to remember that Steven even did an acoustic/bluegrass/hymns album in the first place. And now in 2019, releasing music independently, what is Steven to do? Yes, re-release some of his most personal and heartfelt songs from Deep Roots and then add a few other new recordings as well. Jumble up the order, and here we get Deeper Roots: Where the Bluegrass Grows. Am I complaining? Not really- it’s just that if you have Deep Roots on your computer, then all you need to do is just find the tracks that are just exclusive to this new acoustic album from Steven. Regardless of 5 of the songs being present on both his 2013 and 2019 album, Steven nevertheless creates a space for us to admire his acoustically driven skills and be reminded that longevity in the industry is a testament to how well an artist can reinvent themselves, and this has strongly been the case, successfully, as we see Steven unveil different arrangements of well known classics, making this new album one of the most left-field albums I’ve heard in 2019 thus far!

‘Cinderella’, ‘Be Still and Know’, ‘Life is Like a Mountain Railroad’, ‘How Great Thou Art’ and ‘My Redeemer is Faithful and True’ were all previously released on Deep Roots way back in 2013, and thou these versions are still the same versions (no re-recordings or alterations on these melodies!), Steven still presents hope and encouragement through some of today’s (and yesterdays) most compelling songs of a hymn-like structure. ‘Be Still And Know’ was originally from Speechless way back in 1999, and is a welcomed addition here on this album, this time featuring son Caleb Chapman on split vocals, as we’re reminded that a song that’s 20 years old can still have an impact to music and society today as it did back then when it was written. ‘My Redeemer is Faithful and True’ is another such song, originally recorded on his first album ever First Hand– and originally placed on Deep Roots as well. And while for me this melody may not be as well known to me (because the only time I heard this song prior to only once when I reviewed Deep Roots was on a live DVD Steven released in 2002); Steven acoustic rendition of this fan favourite give me great confidence and hope that our Lord Christ Jesus is who He says He is, faithful and true til the end of the world and time. A journey of revelation and exploration as we believe into this lyrically poignant melody; Steven also unveils ‘How Great Thou Art’, a duet with his daughter in law Jillian Edwards-Chapman, ‘Life is Like a Mountain Railroad’ (an obscure hymn, yes, this time sung together with Steven’s father and brother) and ‘Cinderella’, the song that really took on a whole different meaning since the accident. Though a double-up, ‘Cinderella’ is still great, and adding the phrase ‘still I know the dance will go on’, gives us (and maybe giving Steven himself) a sense of comfort that we will see our loved ones in Heaven, knowing full well that this life we live is not our own, nor it is for us to get too comfortable!

The remaining 8 songs are exclusive to Deeper Roots: Where the Bluegrass Grows, and remind us just how talented Steven really is and how he gives us new arrangements to already well known songs. ‘Without Him’, a song originally made famous by the King Elvis, is given the SCC (and father and brother) treatment with such a song that…feels poignant, but, very, very slow. While I can appreciate the sincerity and heartfelt emotion behind the song, ‘Without Him’ and the nature of the slowness of the melody makes my own enjoyment of the song wither as each listen progresses…sad to say. ‘I’d Rather Have Jesus’, ‘Victory in Jesus’ and ‘Great is Thy Faithfulness’ are also hymns that have been re-imagined by Steven, and with varying results (both ‘Victory’ and ‘Great is Thy Faithfulness’ translate very well, ‘I’d Rather Have Jesus’, with only a 2:29 length and a very slow tempo…not so much), while yet again, there’s another version of ‘I’ll Fly Away’. And while I myself just like the next person loves ‘I’ll Fly Away’, there doesn’t really need to be yet another rendition and version, right? Still, the musical backdrop on this track is the best out of every hymn on the album, and thus, the liveliness of Steven in this song can forgive the fact that ‘I’ll Fly Away’ seems to be one of the most over-covered hymn there can ever be in the history of hymns.

And then there’s the first three tracks- ‘Where the Bluegrass Grows’, ‘Dive’ and ‘Til the Blue’. All three of them form the backbone of this album, and all three are great standouts in an otherwise hymn album, that sadly, regardless of it being left-field or not), isn’t really an album that stands out amongst the rest of this year! Nevertheless, the title track itself brings a big bang to the album, as Steven relays the theme of acknowledging someone’s hometown, in Steven’s case, its in Kentucky, where indeed, the bluegrass does grow! ‘Dive’ is reimagined with country legend Ricky Skaggs co-singing, and is currently being serviced to bluegrass radio, yet it is the heartfelt and emotive ‘Til the Blue’ with Rascall Flatts singer Gary LeVox that stands out on the album as a whole. As Steven relays himself in a recent publication on Billboard.com; ‘…I remember that feeling as I watched so many families devastated and so many families that had lost, not just their homes and things, but lost family members and loved ones [during Hurricane Harvey]. When you’ve had devastating loss and trauma in your life, when you see it in someone else’s eyes or hear it in their voice, you can’t help but stir it again and bring that back to the surface…as somebody who has suffered devastation and great loss, [I wanted] to say, ‘I know right now you feel like you are never going to feel happy or joy again in your heart. Your sky is so dark right now. Your life feels so heavy and weighty that you’re never going to feel light-hearted and laugh with your family and friends again. I know that feeling so well and so I’m here to say that will happen. You will, by God’s grace, feel the blue will return to your sky,’…’ And thus this is how ‘Til The Blue’ began, as a song that was to encourage people who’ve been affected by the hurricane that plagued U.S. in 2017, but now, this song is an anthem for basically anyone who feels down on life in general. A song that can hopefully change the life of the person hearing it, ‘Til the Blue’ continues to ride tall and stand as one of Steven’s most emotive and poignant songs he’s written ever since ‘The Glorious Unfolding’ way back in 2013!

So there you have it…Deeper Roots: Where the Bluegrass Grows. And thus, Steven’s choice of hymns and reimaginings may not necessarily be songs that I’d consider him to sing again in this setting (though songs like ‘Cinderella’ and ‘Dive’ are certain musts to include on an album like this!); most of the hymn choices are obscure and from-left-field…and that’s ok. Even though no familiar hymn like ‘Jesus Paid It All’, ‘Turn Your Eyes’, ‘It is Well’, or even ‘The Solid Rock’ or ‘Fairest Lord Jesus’ are missing, Deeper Roots still feels like a bluegrass/hymns album, and one of the most emotive and unique hymn albums since…well Steven’s own in 2013! A great purchase if you have enjoyed much of his earlier material, Steven branches out into bluegrass music, but still reminds us all that he’s not necessarily going to stay there- ‘…I will continue to do music that’s rock and contemporary. It’s not like I’m not switching and becoming a bluegrass artist for the rest of my days, but this is honoring things that are really important to me–my family, my roots, my Kentucky home, my love for music and my love for God. Kentucky is where those first seeds were planted. Those roots are still there and I love that I got a chance to celebrate them…’ Different album, yes, but not a whole new different direction. Here’s hoping there’s a new album in the future, maybe one that features ‘Remember to Remember’ as the first radio single?

3 songs to listen to: ‘Til the Blue, Dive, Where the Bluegrass Grows