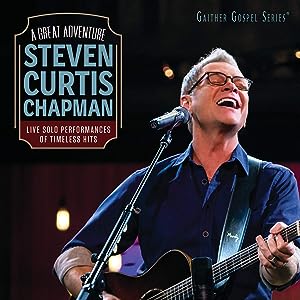 Steven Curtis Chapman need not any introduction at all. Quite literally. This masterful and skilled singer-songwriter and full-of-life man of God has undertaken his own musical journey in recent years in the spotlight- much to the charign and sobering moments that come with living life as a famous Christian musician. Ever since his own adoptive daughter was tragically killed in 2008, Steven’s life, faith, and everything that he held dear to that point in his life came under a microscope. Regardless of whether that was a good thing or not, what transpired from this tragic event is something sort of out of a fairy-tale book. No, his daughter didn’t come back to him. But rather, his outlook on life changed- he became much more reflective and grounded in the word of God. His music from 2009 onward carried with it a sense of urgency, songs that really dig at the heart of what it means to lose and have hope again. Much of his later work, inclusive of albums like Beauty Will Rise and The Glorious Unfolding, was borne out of such struggles in the aftermath of the sad and sobering tragedy. Now here we are in 2019. Steven has decided to go independent. He released his first independent song ‘Remember to Remember’ in 2018, to critical and commercial acclaim. In 2019, he unveiled to us a hymns collection of sorts, and though much of this track list was a double up comparing his 2019 hymns album and his 2013 one way back when, Steven nevertheless achieved success in Deeper Roots: Where the Bluegrass Grows. Now in May 2019, Steven unveils to us yet another collection- this time an acoustic set list of songs spanning from first album till now- an acoustic set of songs titled A Great Adventure: Live Solo Performances of Timeless Hits.

While the list of 13 tracks is by no means an indication of his timeless songs, the album however does provide to us songs that have been dear to him over the years. And let me be the first to note- this is not where you should start off with if you haven’t heard of Steven’s music, and want to have a holistic picture- that is where Greatest Hits in 1997, and a select few from his later years (Speechless, Declaration, All Things New, Glorious Unfolding) is for. But this album, as pointless as it could seem on the surface, is nevertheless made, with such fervour and intentional poignancy, as much of these songs, written prior to Steven’s daughter’s passing, acquire and take on a new meaning post-2008. And sung with such emotion and grace, this release, complete with star-studded songs like ‘Cinderella’, ‘More To This Life’, ‘I Will Be Here’, ‘When Love Takes You In’, ‘Be Still and Know’ and ‘The Great Adventure’ to name a few; shows Steven as his absolute finest, as his instrumentation of these classic songs are very much on point- as I thoroughly enjoy this album, one especially for SCC enthusiasts (like myself) as we take a glimpse into the life of Steven through these songs, and how I’m sure it has been these songs of his own musical past that have helped him on the journey of loss, grief and rising from adversity.

With the album being sold as part of a live DVD set where Steven performed his hits at the Gaither Studios in Indiana; this CD (and DVD I’m sure) catalogue a man whose loss propelled him to continue on with his faith, and remind us all that the God of all creation still creates great things from uncertainty, hardship and difficult times. A collection of songs that even I may not know them all fully (but nevertheless, it was a poignant journey that continues to make me assert Steven as one of CCM’s most prolific and heartfelt artists to date); Steven’s new album is sure to resonate and strike a chord with SCC enthusiasts, or even people who just like stripped down acoustic worship with an inspirational and a confronting edge. Well done Steven for such an emotional ride of 13 songs, though not the best in terms of popularity, it is songs that resonate deeply and profoundly in a personal way. Kudos to Steven for an album that I’m sure will welcome fans old and new. Looking forward to the new full-length studio album, whenever that arises!

3 songs to listen to: Remember to Remember, Glorious Unfolding, More To This Life