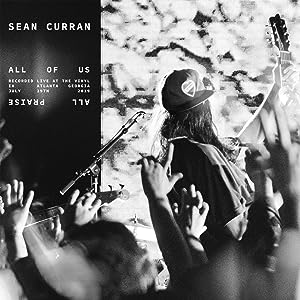 Do you remember way back in the day when Sean Curran was the lead singer of alternative/CCM rock band Bellarive? It seems like forever ago that Bellarive even existed, but they did, and gave us 2 solid worshipful albums, before the band left with no press release about what was happening, not until Sean showed up himself in Passion Conferences and I guess now the rest is history. With no formal statement regarding Bellarive’s disbandedment, nor even an official press release of Sean himself joining Passion full time in a band capacity; Sean Curran nonetheless is known primarily for his songwriting, giving us great melodies, be it part of Bellarive or even part of Passion, from songs like ‘Lazurus’, ‘Real Thing’, ‘Worthy Of Your Name’, and ‘Taste of Eternity’, to others like ‘Heaven’, ‘Almighty God’, ‘Calling on Fire’, ‘Bring Us Back’, ‘Sing’ and ‘Your Great Love’; to name a few. Now here we are in 2019, and Sean continues his involvement with Passion and their annual conferences. But that doesn’t mean that that is all he does. Sean recently unveiled to us his debut EP under Capitol CMG titled Bigger Than I Thought. We as a site reviewed the album here, and me personally thought this album was one of my favourite worship albums in quite some time. Sean is very much an artist who is oetically inclined and lyrically sound as any other artist, and this album that dropped earlier this year in June, is certainly for anyone who loves worship music, with a little musical freedom and a heartfelt overall message, through all the songs, of entering into a place of worship without any worry or expectation. Now once again here we are, at the end of October- Sean recently unveiled his brand-new follow-up EP, this time a live project comprising of some of his greatest hits from his solo studio debut EP, some others new, and while also others being covers of famous worship songs as well. Sean’s unveiling of what people could consider as ‘just another live project’, is anything but, as Sean continues to fervently assert himself as arguably one of the worship ‘genres’ most humble, honest, and passionate, and a worship artist I’ve enjoyed listening to, ever since artists like Leeland, All Sons and Daugthers and Meredith Andrews back in the day.

Since some of these songs have been heard before, by myself, on Bigger Than I Thought, I figured I won’t really re-hash what I wrote about in that review, here. Songs like ‘Bigger Than I Thought’, ‘The Great Migration’, ‘All Praise’ and ‘Live Again’ were all present from his debut studio album, and all can be seen in review format here. On this live project, these songs are hardly any different, in fact, I actually prefer Sean’s presence and atmosphere live compared to that of a studio track- not to take anything away from  Bigger Than I Thought, but rather, I’ve always felt that he is a much better live facilitator of worship than inside a studio creating a song especially for the church. All these songs, both present on his debut album, and the remainder, all thrive here on this new live project. ‘Worthy Of Your Name’, one of the songs to be ‘doing the rounds’ if you will at various Passion Conferences of late, was indeed written by Sean and featured as a radio version on WOW Hits 2019. Here in this live format, I’ve found myself enjoying the song all the more. ‘Good Grace’, by UNITED and one of even UNITED’s best in recent memory, is given the Sean Curran treatment and placed here on this album as well- and though for me I still prefer UNITED’s original version better, Sean does take a good stab at re-creating the song and even making it his own, all for the reason as to introduce another great worship song to the church. I’m sure people have heard ‘Good Grace’ this year before, and if you haven’t, well, then, you need to check out Hillsong and all its facets and forms, quick smart.

Which leaves us with the two remainder originally written songs for this live project- ‘Be Ready’ and ‘Want it All’. While ‘Be Ready’, the album opener, is just one short refrain sung over and over (similar to repeating the only 2 lines on ‘Surrounded (Fight My Battles)’)- ‘…something needs to break off, heaven wants to break in, anything can happen, we gotta be ready…’, what the song has going for it is vibrancy, passion and an earnest heaviness and necessity to be bold and be ready for what Christ has expected of us. It is when we are ready for Christ at any moment that we are in tune to what He is all about- and when we know what He wants not only for our lives but for the lives of people in society, we can rest assured knowing that He will give us the equipment to further that and make such a thing a reality. The EP then imparts to us another new song in ‘Want It All’, and its message is as simple yet still as equally profound- that if all of what Jesus says is true, if all of what is offered to us in the Christian life is in fact a reality that we can and should indeed pursue, if Jesus did come and alleviate us from the death that awaits each of us at the end of this road called life, then we want to fervently and unashamedly declare alongside Sean that we want it all- everything that comes with being a Christian, because we’ve been awakened to the knowledge and the power of who God is and who we are in spite of Him and because of Him. It is a telling revelation I’m sure to some, but also a timely reminder for others. Regardless, ‘Want it All’ is a definite standout, and one to be enjoyed if you love Sean’s music, or if you just love worship music, period!

Bigger Than I Thought EP was by far one of my favourite EP’s of the year thus far, and one of my favourite ‘up and coming’ (I say this in inverted commas because though Sean is not new in that he was in Bellarive before, he is a new artist in terms of him singing solo and in a genre of worship!) artists of the year. All Of Us (All Praise) continues to assert the claim that Sean, one of the many ‘new’ faces of Passion, inclusive of Melodie Malone, Kristian Stanfill and Brett Younker; is bringing in a new era of Passion just as passionate and worship-facilitating as the old guard of Chris Tomlin, Christy Nockels, Crowder and even Matt Redman. The ever-changing landscape of Passion, and in effect, the changing landscape of worship music and worship artists as a whole; is very exciting- Sean’s new solo music is evidence of this. A must-have if you enjoy modern worship music along the lines of Passion and all its worship leaders; Sean’s new live EP is just the start of a hopefully long career of music that can hopefully shake up the notion of what worship music should look like and sound like to a new generation. Well done Sean for giving us All Of Us (All Praise), can’t wait for a full-length album, whenever that may arise!

3 songs to listen to: Live Again, Worthy of Your Name, Bigger Than I Thought