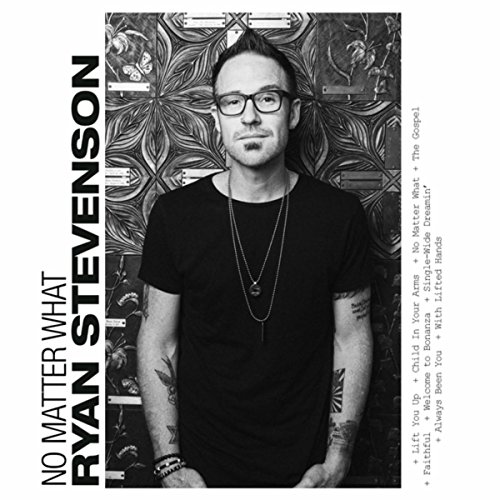 One of the mainstays on Gotee Records, alongside Finding Favour, Hollyn and newcomer Aaron Cole (artists like Jamie Grace-Harper, Morgan Harper-Nichols and EDM duo Capital Kings have all departed from the label within a year or so of each other); Ryan Stevenson has been creating music for the people and songs to inspire us all for a while now. Yet, if I am to be very frank and honest; previous to his powerful and emotive radio single, “Eye of the Storm” that peaked as high as #1 on Billboard Christian Songs Charts in 2016, I’m not even sure that many people even heard of Ryan and his music. I mean, even though Ryan has been within the music business for a few years, releasing an EP Yesterday Today Forever on BEC Recordings and Holding Nothing Back, his new 2nd EP, on Gotee Records in 2013, it was his debut full length album Fresh Start, that featured “Eye of the Storm”, that really placed this new singer/songwriter on the map of anyone who loves CCM (like myself). While much of CCM’s most popular, started their career in music at relatively young ages, Ryan previously held a job for a while as a paramedic prior to switching to music full-time. That’s what I reckon makes Ryan and his music so appealing, heartfelt and relatable- the fact that he undertook a regular average joe job before doing music, we can understand that when he sings about the daily struggles in life, he actually does! We think, ‘gee, this guy is not just an idealistic musician who has no idea what the common man deals with each day, he is like us, he did have a career in a ‘normal’ job prior to this, so he knows what we’re going through’. Not that I think like that when I hear music from any artist- think whether the song is even relatable to me given the background of the artist singing it, but Ryan’s position is a unique one.

Since his debut album on Gotee Records in 2015, Ryan has imparted to us emotive and encouraging songs, all reminding us of the necessity of Christ in our lives, and all coming from his new album titled No Matter What releasing later on during 2018. Yes, even this current single, the title track, is also from the album, and is just as powerful and heartfelt has his two singles that he released in 2017. ‘The Gospel’ was an anthem that shot to the airwaves in April last year, and reminds us all that it is the gospel that makes a way- into our hearts, and into the city as the truth of who God is and who we are in light of what He did for us to be brought back to Him, becomes a reality- not just in our own lives, but in the lives of every other person we touch on a daily basis. ‘Lift You Up’ released as a single at the end of 2017, and is in fact a song that sounds familiar…because it is. Ryan released his own version of the song that was originally on This is Not a Test, a studio album by TobyMac, that features both Toby and Ryan singing on the song. Here, Toby is absent, there is no rap bridge, the song is shortened by a full 30 seconds or so…that’s about it. Everything else about the song is quite similar to the duet that was recorded a couple of years ago. Both these songs are included on his new album No Matter What, as is the title track of the album, that released as a single on iTunes not too long ago this year (I think at the end of January 2018).

Featuring the lead singer of MercyMe, Bart Millard, ‘No Matter What’, co-written with his producer Bryan Fowler, and inspired by the scripture 2 Corinthians 12:9-10, is a timely reminder that nothing and no one, no circumstance, what we do or don’t do, can cause God to love us any less or more, God just does and that is a fact. As Ryan states himself, ‘…over the course of the last several years, I’ve continued to ask the Lord to give me songs that exist for a reason. As we were working on this new record, a reoccurring theme I felt the Lord continually whisper to my heart was ‘beloved identity.’ I, like many of us, grew up in the church- a religious environment, where we weren’t necessarily nurtured and taught about God’s grace, patience and compassion. As I continue to grow and experience life, the truth I continue to encounter is ‘I am His son, no matter what.’ It is easy to fall into the trap of performance-based relationship with God when we’ve been taught in religious environments that He’s mostly disappointed with us. This song hopefully will encourage all of us that even though we struggle, Jesus is overseeing the process…’ And this above quote is in essence what the message behind ‘No Matter What’ is about. That our love is freely and constantly given no matter what. No matter what happens or doesn’t happen. Period.

That message alone ought to be enough for us to hear this song at least once. And while the music itself behind the song never really gives the melody an anthemic feeling, like his previous songs like ‘The Gospel’ or even ‘Eye of the Storm’, what the song nevertheless brings to the table is heart and soul, hope and encouragement. Whether it’ll be this song on WOW Hits 2019, or ‘The Gospel’ or ‘Lift You Up’, we don’t know, but what I do know is this- that we will be hearing from more of Ryan both now and into the future. Looking forward to the new album, and if it is anything like what these 3 above aforementioned songs are like; then this upcoming collection of songs will probably some of Ryan’s most heartfelt yet! While the song itself is as radio friendly as any other track we’ve seen from him, the impact of this track will I’m sure reach a lot of people in the months ahead. Kudos to Ryan for such a song, one that hopefully will encourage us all that nothing can be in the way of God’s love, even ourselves! Well done Ryan for a thought provoking song, can’t wait to when No Matter What releases later on during the year!