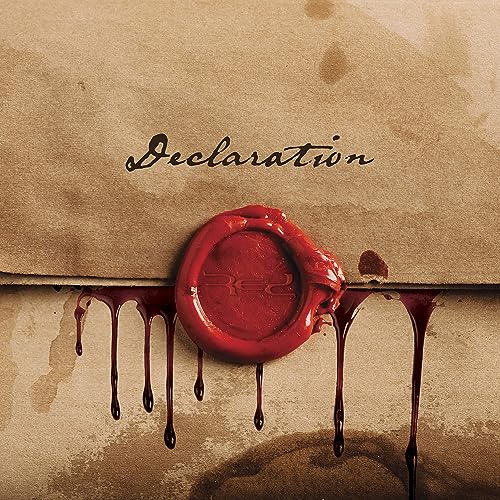 I’ve gotta be honest with you guys, I’m not really a fan of hard, hard rock. That’s not to say I don’t appreciate a few songs here and there, but overall, in a general sense, this particular genre doesn’t speak to me that much. However, for some reason, I can’t stop spinning the latest hard rock single “The Evening Hate” from RED. Though not in my ‘usual’ genre of songs I normally listen to, I took the plunge with listening to “The Evening Hate” when the single released last year…and the result is a listening experience like no other.

Now you may have heard of the CCM band RED, who crossed over into mainstream music quite early in their career; and have been creating punchy and energetic rock anthems since 2006. Or maybe they had always been in both the mainstream and Christian markets? I don’t know for sure. However regardless of which genre Michael Barnes and his friends want to be associated with, the fact remains that these guys have created plenty of head-bangers, and plenty of softer ballads coupled with lyrical moments of genius! Songs like “Already Over”, “Breathe Into Me”, “Never Be The Same”, “Prefect Life”, “Death Of Me”, “Hold Me Now”, “Take Me Over”, “Release The Panic”, “Not Alone”, “Faceless”, “Gone”, and “Still Alive (Looking For A Reason)” have all graced our ears and have all ministered to each one of us in many different ways (or maybe not at all, which is fine…different tastes for different people!). And with “The Evening Hate” already making waves among RED fans, it seems like the inspiration continues well into this year. The independently released Declaration has dropped just this past month… and lyrically I reckon it’s these guys’ most vulnerable and honest album yet!

Lead single “The Evening Hate” probably cannot be delved into and explored lyrically until each one of us has seen the cinematic 14 minute music video. In the video (which I won’t spoil that much!), the band are in a state of war and struggling against an unseen enemy presumably in an apocalyptic future like the future depicted in TV shows like Revolution or The Walking Dead. That’s all I can really say about the video, yet what I will say is that the concept of allowing oneself to feel even pain and hate, allowing ourselves to feel emotions that have been buried for so long inside our own ‘evenings’; can be very cathartic and therapeautic. With regard to whether these feelings are healthy and in line with what Jesus has best for us; well that’s another story. But at least RED has opened up discussion for heavy topics, and for that I commend and applaud them.

The rest of the album carries on from the concept of allowing oneself to feel everything that is needed to prove that we are alive and that we are human, and that we still have purpose and meaning in this life. Album opener “All For You” is a head banging intense rocker that takes me slightly by surprise (and does my head in musically, in all kinds of ways!)- but is typical RED, as Michael ardently relays to us a plea to an unknown force/entity, asking them ‘…why was I scared of you? Why did I let you control my life? I couldn’t see before that I was living for you, for you, I, I did it all for you…’. It is these lyrics that actually show a toxic and unhealthy relationship, as guitarist Anthony Armstrong reiterates that the track is about dying to self, dying to the ego and becoming humble: This song is about the ego. Most are wondering about the bridge lyric. “This entity inside of me, this deepest love, this whore…” The entity IS the ego. An alternate version of ourselves. When we allow it to exist. It’s a dark love that leads us in so many facets of our life’s. A love that we unconsciously return to when we feel like it serves us. “This whore”…as a verb/noun, describes the unscrupulous life style this unhealthy ego creates when it’s allowed to exist. It’s “an endless war” that we ALL fight. Another inspiring and impacting track is “The War We Made”, a relatively quieter ballad-y type track which basically speaks about an internal war within ourselves- a battle between good and evil for the soul and for control over our lives. As Anthony Armstrong relays: ‘The War We Made’ talks about our innate ability as humans to cause destruction in our own lives. A lot of the time, we don’t even realize that we ourselves are the source of the pain. And if we want to see a change brought about, it’s a fight that we have to be willing to win. Infectious and contagious, energetic and pulsating; “The War We Made” is as confronting as it is compelling, as RED has definitely recorded a winner here in my own opinion!

“Infidel” and “Cauterise” are some of the band’s heaviest songs yet, as the former probes and probes and probes, singing from the devil’s perspective as he tries to tempt us and make us his own, of which he is successful in some instances; while the latter a no-nonsense, high-octane and intense melody about letting the devil know that he won’t win, that we will defeat him through ‘cauterisation’, or through Jesus (which is subtly implied). I still can’t get into RED musically especially in these tracks which make me have a headache so much that I need to do this review in parts and not in one sitting; however lyrically there’s no denying that this is some of the best songs RED has done. While “Float” brings the theme back to fighting within ourselves, with lead singer Michael Barnes passionately crying out that he’s ‘…fighting the fear, I am letting go, letting go, it’s already here, I am letting go, letting go…’, signifying a battle within the soul for dominance and a longing to squash down or even kill the bad parts of himself. For me personally, “The Victim” starts off with a pretty cool xylophone riff, then goes off into a start guitar rock tune, yet is quite interesting lyrically, and one of my favourite tracks here. Lyrically it takes a while to fully understand and grasp what the track is trying to convey to us- perhaps Michael is sung from God’s perspective, singing to someone who has a twisted and warped view of faith and believes himself to be the victim…and maybe God is calling out what this person believes in order to jolt him and wake him up to the reality of the unconditional love of God? Maybe I’m reading too much into it but that’s what I think “The Victim” is about.

With “Sever” being one of the few promotional singles that RED released prior to the unveiling of Declaration; the lyrics turn emotional and vulnerable, as Michael sings presumably about the breaking down of a friendship, until the time when the persona severs ties with his friend permanently. It’s a sad song, but the harsh reality that sometimes relationships break down and there’s nothing one can do to fix it; maybe the best thing is to cut the cord and cut them off completely, particularly if they aren’t acting like themselves and do not want the help. The penulatimate track on the album is “Only Fight”, again another heart breaker, as Michael takes on the persona of someone fighting with his spouse or significant other, and asking them why do they always and only fight with each other; while Declaration ends with the uplifting and encouraging “From The Ashes”, a sort of spiritual sequel to “The Evening Hate”, with Michael once again singing to the devil- or possibly his own demons- and declaring that ‘…we are fighting to survive, from  the ashes we ignite, we live, we die, we fall, we rise…’, signifying that even though the devil may win against our bodies, the soul and our spirit is claimed by God, hence the fact that these lyrics are so poignant- our bodies may fall yet our soul rises to heaven with our Heavenly Father and Maker.

News flash guys, here’s a real shocker- I still won’t be as much of a fan of RED as the next guy. No, but seriously… with the release of Declaration; I may cautiously anticipate their next album, and possibly could revisit the band’s discography thus far in full. And if “The Evening Hate” and Declaration can make a fan out of me (maybe in 2-3 years!), then this song definitely has done it’s job! The album too! Well done Michael Barnes and co.; can’t wait to see more cinematic videos in the future as well whatever God has in store for you next!

3 songs to listen to: The War We Made, The Evening Hate, From The Ashes