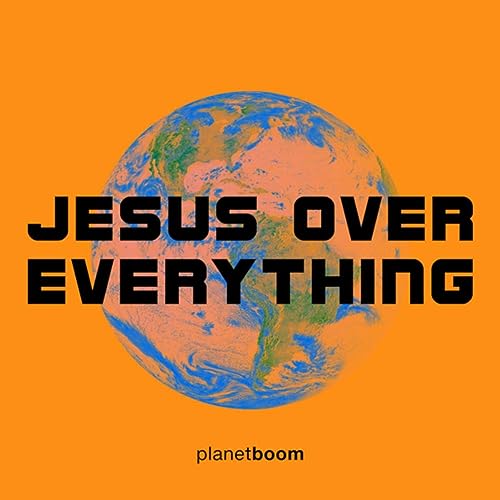 Planetshakers need no introduction. Seriously- this Aussie worship movement, who has been around for decades, and will probably rival Hillsong- all incarnations- in terms of popularity (but not influence as of yet!); have had their fair share of success as well as controversy. Just reading about them on Wikipedia will provide you all with some history about this band and what they’re all about…and now that you’re all sped up and up to date; let us move onto the youth arm of this ministry. Planetboom released their debut album Jesus Over Everything today. With Planetshakers and Planetboom being similar to Hillsong Worship and Hillsong Young And Free; with that analogy, you’d be probably assuming that ‘boom’ is more electronic, remix-y, hip and ‘cool’ that the veteran ‘shakers’- and you’d be right. Planetboom is more worship, but it’s updated for a much more younger audience. And what is the result of this album, you may ask? What is my end analysis of 11 tracks of worship with a dance twist? Let me dive in, but let me first say that this release is probably the best dance/remix-y/electronic debut I’ve heard since Hillsong Young & Free’s We Are Young & Free in 2013.

First of all- let me say this disclaimer before jumping right in. Prior to hearing Planetboom’s single “Jesus Over Everything” last year, I had no idea that there was even a youth band birthed out of Planetshakers, even though Planetboom already released 2 singles in 2017. However, one listen to “Jesus Over Everything”, which released in early June, and debuted as a music video on New Release Today (how I found myself to come across the song!); and I was so hooked. Literally. This song, in my opinion, is probably the most inspiring and impacting song I have heard in 2018. Other than “You Say” (Lauren Daigle) and “Reckless Love” (Cory Asbury) of course. Though you may not agree with me, even before we’ve actually listened to this track; let us stop and just dwell upon the 5 minute worship anthem.

With a hymn like atmosphere and powerful, stirring keys as a backdrop to what I would say is one of the worship anthems of this generation; “Jesus Over Everything” is simple thematically. That we as Christians can, ought to, and should place Jesus over everything else in our lives, because of the simple concept that He is God, He is King, that He is worthy, and there isn’t anyone else like Him. And also because He loves us so much that He died for us on the cross, and rose up three days later in order for us to be sinless and blameless in His eyes- and worthy to enter into heaven after we die. That is the song in a nutshell, and with me personally enjoying this song so much more than anything Planetshakers has ever recorded (yep, I’m willing to go out on a limb and say that!), I’d say that anyone else who listens to “Jesus Over Everything” will be changed from the inside out, and be impacted in ways they can only imagine, as we together make this declaration and stand that we choose Jesus above all else. Recorded as a live version on this album as well as the vibrant studio recording, one of my favourite parts of the song is the 1 minute rap, and if you guys take a moment to listen to the refrain that could rival raps from KJ-52 and NF; it’s easy to see why it resonates with me. The rap just lists out stuff the world says we should place high on our priority list, but also stuff that Jesus should preside over. Because He is who He says He is, why wouldn’t we place Him above everything else in this world? Every good thing, and every bad thing. A tough concept to grasp, right? Let’s ponder that just for a second.

“…Over every temptation ever aimed against us
Over sin and depression
Over fear and sickness
Over emptiness and loneliness
Over silence and shame
Over the potential that we’ve wasted seeking acceptance and fame
Over racism and hate
Over violence and rage
Over every substance we’ve ever taken trying to avoid all the pain
Over success and popularity
Over pride and vanity
Over every attempt we’ve ever made to try escape our reality
Over the search for identity
Over the enemy of our destinies
Over the lies from our past
That would try and keep us from who we’re called to be, huh
Over everything the world would try to tell us to seek
Over everything we’re supposed to want or supposedly need
Over money and possessions
Things we’re meant to sell out to
Over the “gods” of our generation
Things we’re meant to bow down to
Over every name and atmosphere
Over culture and king
Jesus over everything
Jesus over everything…”

Rap bridge on “Jesus Over Everything”- Planetboom

I guess after this near-flawless and stellar worship anthem, there’s nothing else that could possibly compare when listening to the rest of Planetboom’s tracks, right? Well, yes- and no, because no other song on this album is remotely similar to “Jesus Over Everything” and can’t be compared. It’s like comparing apples and oranges. Both are good for you right? But both can be enjoyed on different levels by different people, depending on preferences. “Lemme Tell Ya” is strikingly and way, way different to “Jesus Over Everything”- it’s like chalk and cheese. That’s not a bad thing, not by any means. It just means that the band is so versatile musically, a quality that is rare nowadays when listening to songs by the same artists. While “Jesus Over Everything” is straight up worship, “Lemme Tell Ya” has rap and rock elements. Though at first listen and on the surface, the song can feel disjointed with a ‘garage rock’ feel; I guarantee it’s an acquired taste and something that we can get used to the more and more you’re exposed to that music genre. Though right now I don’t really appreciate the music style of “Lemme Tell Ya”, the lyrics are quite impacting and stirring, as we remember that Jesus has risen, that He is King, and that is reason alone to ‘lemme tell ya ‘bout Him’. “Run To You” on the other hand, is straight up worship and has a feel of old school early 2000’s Planetshakers- which is definitely a good thing! Lyrically simple and musically unassuming, we are met with a powerful moment of praise and worship, as we give honour and glory to our King; crying out that ‘…all that I need is, found in You, Jesus, Your presence is my home…’– and as we immerse ourselves in the 80’s themed guitar solo at the end of the track, let us close our eyes and wonder in awe over such a compelling and impacting melody!

With “FYI” and “We Choose” being 1 minute interludes and spoken word pieces that precede “Lemme Tell Ya” and “Jesus Over Everything” respectively, each of these ‘songs’ outline that notion that Jesus is to be praised and worshipped over everything- because He is the Only One who can truly satisfy us and give us peace. It may sound like these ‘interludes’ are unnecessary, however I reckon they serves the purpose as reminders of the heartbeat of the album. The declaration of living for Jesus wholeheartedly moreso that living for anything else- the message of the band is commendable and worthy of mentioning further in these tracks. While “Praise Over Problems” (also recorded as a live version and a studio version) is an interesting track- it’s lyrically quite sound as the group speak about praising Jesus in the midst of our problems as a way for us to gain perspective and realise that our issues and the ‘mountains’ we think we have aren’t as big as we think they are, especially when we know that Jesus has the solution in the palm of His hand; however the electronic nature of the song, though bold, sounds a bit like a mishmash- it’s as if Tobymac, LZ7, Capital Kings, KJ-52, NF, KB and Andy Mineo all co-wrote in a room and “Praise Over Problems” is the result. Nice in theory, but takes a while getting used to, but not horrible by any means.

“New Levels”, similar in style to what Planetboom are known for as evidenced earlier in this review, features electronics abound, as the song lacks any structure of verses and choruses; but lacks up for the ‘disorganisation’ with passion and intensity- the free-verse track is probably the most excited I’ve heard the band perform any track on this album. “Everything x Everything” though is probably the most musically craziest song on the album- with the track jumping between genres every few seconds (rap, reggae, metal, pop, CCM, worship, Caribbean style); while we are brought back to familiar territory musically with the slow tempoed worship ballad “I Belong”- musically similar to Planetshakers when they record ballads- and one of the highlights of Jesus Over Everything. Especially in the bridge where the declaration is sung that ‘…everything I’ve been through, surrender it all to You, all that I am belongs to Jesus, all of my heart and soul, and all of my future holds, You are the Lord of all, I belong to You…’.

“Jesus Over Everything” is a song that, to me, will never get old. It’s a song that can be sung today, in 1 years’ time, or even in 50 years’ time; and the effect will still be the same- with the Holy Spirit anointing this song there will be no doubt that many people will effect positive change in their life, and give over their everything to God after hearing what Planetboom has to say. The same thing can be said about practically every song on their full length debut album- and if you haven’t heard their songs then I suggest that you hop into the Planetboom bandwagon. So how about I hand over the mic to Planetboom, and let them invite you into a worship experience like no other? And before I go, let me ask- are you surrendering everything over to Jesus? Is He over everything? If not, why not? Are you telling the world about Him?

3 songs to listen to: Run To You, I Belong, Jesus Over Everything