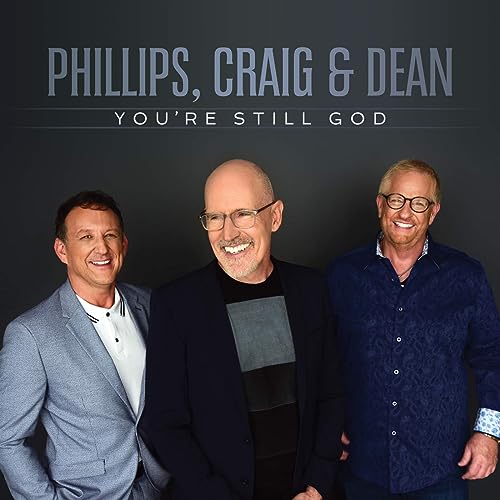 Having commemorated their 25th year as a band in 2016 (as well as their 25th number one hit song in “Let It Be Known”), the southern gospel vocal trio Phillips, Craig And Dean (consisting of pastors Randy Phillips, Shawn Craig and Dan Dean- each a pastor at three different churches in America) have recently released their new studio all-original album You’re Still God. Comprising of the smash hit pop single “You Keep Hope Alive” originally penned by Jon Reddick, as well as a further 9 originals; You’re Still God is the band’s first original release since 2014’s Above It All. Known for their powerful and compelling worship ballads, and their cover songs that never fail to astound and amaze me time and time again (inclusive of their mega radio singles “Revelation Song” and “When The Stars Burn Down (Blessing And Honour)”), this album is no different to their many, many successful and popular albums released previously, with plenty of God breathed and Holy Spirit inspired moments. Veterans in the worship music industry, Phillips, Craig And Dean have created a stellar and engaging album (even though there’s only one lone cover!), as You’re Still God combines the energetic and enthusiastic heart for Jesus that each of the three vocalists have, a fresh and relevant musical sound, as well as the musical prowess of producer Nathan Nockels. If you’re not a fan of the PCD guys, then there’s no album like this one to start listening, especially when you will be immersed straight into some heartfelt, poignant and powerful new worship favourites!

I’m not the biggest Phillips Craig and Dean fan- let me just say that from the outset. But from the first note of “Almighty God”, it didn’t matter that I wasn’t a huge fan. I was a big fan in that moment- worshipping God alongside these guys who have been in the music industry for years and years. “Almighty God” is a compelling, stellar worship anthem that has the ability to bring together all believers from their different walks of life together in communion and worship; and for this reason alone, I applaud these three men of God for creating a brilliant album opener and one that is simple yet effective in ushering us all into fellowship with our Father. And while the opener ticks all of the right boxes here, and is as captivating as it is honest; the rest of the album follows in the same vein.

“Reach For Me”, sung from God’s perspective, is as CCM and pop as they come, as we are presented with a potential radio single, that emphatically declares that all we all need to do is to ‘…reach for me, I will hear you when you call and I will not let you fall, just look up and see…’; while lead single “You Keep Hope Alive”, though not as engaging or powerful as Mandisa’s and Jon Reddick’s versions, still packs a punch, prayerfully relaying to us that Jesus is the One who keeps our hope alive, and that ‘…there’s hope in the morning, hope in the evening, hope because You’re living, hope because You’re breathing, there’s hope in the breaking, hope in the sorrow, hope for this moment, my hope for tomorrow…’. “There Is A God”, another personal album highlight, is as revealing, emotional and honest as any song released over the past few years, as the trio ask plenty of questions to God, asking Him where He is in the midst of the suffering- and the brilliant part of this track is that it doesn’t offer up any rosy tied-in-a-bow answers. The lyrics state that yes there is pain, but there is still a God- yes there is suffering now, but the evidence in our lives and the experiences that we have in the past point to the existence of our Heavenly Father, as we realise that His timing is not ours and His ways are higher than our own and far beyond human comprehension. This track may not comfort anyone right now, but guaranteed it will change someone’s life, and it will draw them closer to Jesus Christ,

“Just As I Am”, an original piano led melody rather than the hymn of the same name, weirdly shares a similar theme, as PCD earnestly highlight to us a prayer, telling God that we come to Him just as we are, and that He doesn’t leave us just as we are. After our transformation by God, we’ll be forever changed, and it is this being made ‘brand new’ that this song speaks about. While musically, “Ever Color” is from left field, as in PCD would never throw a pop/dance party like this. But this song surprisingly works, as this vivid recounting of how even every colour in this world points to Jesus, though cheesy, is nonetheless needed in a world where comradery and unity in believers is quite rare to find nowadays. “Testimony” though, feels like a let down, even though the song is lyrically quite strong and the song still has good intentions- because we have equally poignant and resounding tracks available to us such as “Testimony” from Elevation Worship, “My Story” from Carman and “My Story” from Big Daddy Weave. Not that this song is bad, it’s just that the subject matter of Jesus transforming our lives has been done many times before in mor engaging ways. But if you are impacted by this track, then that’s more than ok!

Originally, I thought the title track would be a cover from Philippa Hanna. But what I was presented with was a brand new song that I was initially disappointed by. However multiple listens reveal one of the most thought-provoking tracks of PCD’s career. The question of whether God is sovereign even in the midst of questions, doubt, despair, suffering and unfulfillment; isn’t a new one. The way these guys tackle the age-old problem though is with a sense of melancholy, respect, reverence and understanding. Rather than belt out a praise tune, these guys are mindful of the audience from which these questions can arise from- and it is in this piano ballad where I believe people hurting and asking questions can find peace, healing and some solace. Sure the notion that ‘God is here, you just can’t see Him right now’ may be true, but it’s not going to help if we act all joyful around those who are hurting. So hopefully this track can meet people where they’re at.

Just because Phillips, Craig & Dean deliver to us fervent and powerful big booming ballads; doesn’t mean there’s no more energetic material left in the album. Penultimate track “There Is A Redeemer” is musically quite opposite to Keith Green’s smash hit song, as these guys passionately let us know that Jesus is the only Redeemer for our lives, that we can ‘…come with your arms wide open, look up to heaven knowing, for everything, everything that’s broken, there is a redeemer…’; while You’re Still God ends on a much more personal prayerful tone, with the acoustic guitar led hymn-like “Tears”, where these three attempt to describe heaven and what it’ll be like. Lyrically nothing like Matt Hammitt’s song of the same name, “Tears” comforts and reassures us that God has prepared a place for us after our earthly deaths. It’s something to look forward to, and gives us resolve to spread the good news of Jesus Christ to everyone we meet!

While I haven’t fully listened that much to a Phillips, Craig And Dean album from start to finish before (aside from this album, and then Above It All in 2014); you’re Still God has further changed that opinion greatly, as I appreciate this vocal trio more, and am ministered to by their music! These guys have been recording music for a while, and they don’t seem to be slowing down, which is great! There’s plenty of musical styles on this album, and I encourage you all to listen to these 10 songs of joy, praise to God, and adoration. Worship music at its finest, this is one of the most comforting and worshipful albums of 2020, so dive in, and enjoy! You’ll especially love this album if you like artists like Newsong, Big Daddy Weave and Jason Crabb!

3 songs to listen to: There Is A God, Every Color, Tears