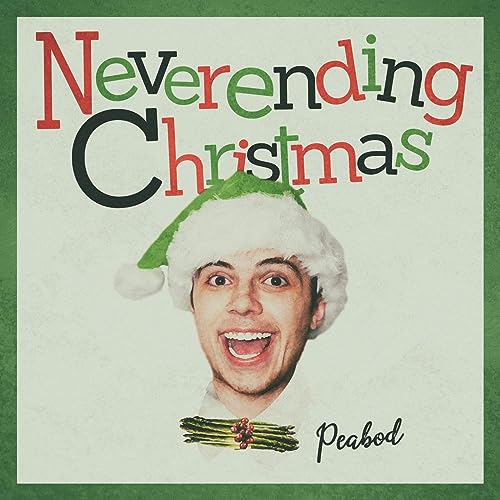 Isaac Peabody, known professionally as PEABOD, is the recent signing to Centricity Music. And on a label that houses artists like Lauren Daigle, Jason Gray, Carrollton, Andrew Peterson, Jonny Diaz and Plumb to name a few, the rapper may fit out of place. Yet from the calibre and quality of PEABOD’s debut album Healthy Snacks which released last June (that we haven’t reviewed, but will!), it’s clear that Isaac isn’t letting pre-conceived ideas weigh him down, and is delivering songs that push the boundaries of what rap music, or even Christian music, should and can sound like. Enter in his new Christmas single “Neverending Christmas”, a 3 minute bundle of joy and celebration of the real reason for the season.

Now I don’t know about you, but I can safely say that rap isn’t really my preferred genre. Sure I can appreciate a few songs here and there, however me listening to a full length of rap music? I don’t know if I could handle that…sorry if I offended anyone but that’s just my humble opinion. Yet Isaac’s songs have quickly shifted my line of thinking (as his ‘brand’ of rap is the kind of happy, summer-vibes rap!), as I am met with a young man of God who is bringing hope to the nations in everything God has set out for him to do. With Isaac clearly having a blast and a fun time on “Neverending Christmas”, as he deftly and expertly conveys to us that because of Jesus coming down to earth all those years ago, we can have life and live a ‘never ending Christmas’; this melody in my opinion is one of the most ingenious Christmas songs of the year- but don’t take my word for it; listen and be amazed!

So…after listening to this song, and after I review Healthy Snacks in about a week or so, do you reckon PEABOD has encouraged me to listen heavily to rap and review all of the other Christian rap albums this year? Maybe, maybe not- the jury is still out on that one; however one thing is for certain. And that’s the inescapable truth that PEABOD will be big this coming year. So what are you waiting for? Let’s have a “Neverending Christmas” everyone! And later on let’s tackle Healthy Snacks as we remember that Christmastime is when we remember Jesus and his birth, and let us dwell upon the fact that Isaac is crazily good as a rapper and a songwriter!