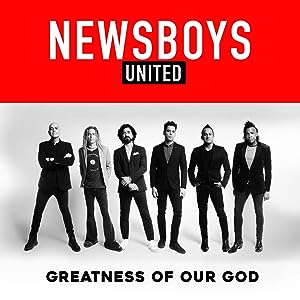 Newsboys [UNITED] – The Greatness of Our God (Single) (iTunes/Amazon mp3)

‘…Peter and I have been dear friends for decades, so it’s an incredible blessing to make music together now. We love the message of ‘Greatness Of Our God,’ and the song is even more meaningful for us because together we are proclaiming our gratitude to the Creator of the universe…’ ‘…We had such a brilliant time recording this song. I think we all knew we were onto something special during the process, so we’re excited for ‘Greatness Of Our God’ to be the first official Newsboys United single…’ If one artist/band can stand out as to having the most unique and colourful music careers thus far in and around the CCM and worship industry over the last 20-30 years, Newsboys would be the group. Even if you haven’t heard any song by the band who originated from Australia in the 1980s (I find it hard to believe…I mean, everyone has heard songs like ‘Shine’, ‘Breakfast’ and ‘Entertaining Angels’ right?), we all know the good ol’ Aussie band from down-under that broke the stigma that bands/artists outside the U.S., especially from Australia, couldn’t become famous. And here we are, decades later. And radio singles later too. Think about it- with songs like ‘Shine’, ‘Breakfast’, ‘Reality’, ‘Entertaining Angels’, ‘I Am Free’, ‘Something Beautiful’, ‘In The Hands of God’ and ‘Stay Strong’, it’s no wonder that Newsboys have been successful- with such heart and passion delivered in every song that they record, we are met with one of CCM’s pioneers throughout the last few decades.

But then 2009 came, and Peter Furler stepped away from the band. Maybe initially it was going to be stepping away for him to take more of a producer role, but nevertheless, since 2009, Peter wasn’t involved with the band…until now that is. Between that time, Michael Tait, 1/3 of the on-hiatus group DC Talk has been leading the band, and with albums like Born Again, Love Riot, Restart and God’s Not Dead under Newsboys’ belt with Michael at the helm (and countless radio singles too, from ‘God’s Not Dead’, ‘We Believe’, ‘Guilty’ and ‘Crazy’, to ‘That’s How You Change the World’, ‘Born Again’, ‘Way Beyond Myself’ and ‘Live With Abandon’); we have seen Newsboys bring to us a different style of pop/rock/worship music. Not to discount anything that Peter has ever done, it’s just that Michael has made the band his own, never trying to emulate Peter in any way in any of the concerts (in fact, most, if not all of the songs- except ‘He Reigns’ and ‘Something Beautiful’, of the Peter Furler era have been scrapped from the Newsboys setlist of late). It’s been unique and refreshing to see the Newsboys continue to evolve and thrive with changes in personnel. To tell you the truth, everyone thought the band would be over, without Peter Furler. Oh how we were all wrong. Dare I say, that Newsboys 2.0 (with Michael Tait) has been just as successful, maybe even more so, than Newsboys 1.5 (with Peter Furler) (Newsboys 1.0 with John James at the helm…who remembers that?).

Which brings us to 2019. After Peter was guested on Newsboys’ cover of the Cody Carnes chart-topper ‘The Cross Has the Final Word’, no one knew what to expect. Was Peter rejoining the band? What was going on? Then there was the Newsboys United tours that occurred throughout 2018 and into 2019, whereby Newsboys reunited with ex-memebers Peter and Phil Joel to tour the U.S. and unveil the full Newsboys catalogue. The tour was a success, and while initially the 6 men only booked 30 – 40 shows (because frankly, they didn’t know how they were going to be perceived), what started out as something so hesitant turned into quite possibly one of the longest tours by any CCM act in recent memory. And through all of this…let’s just say that Peter and Phil’s involvement with the band (other than touring) is about to become a little more permanent. ‘The Greatness Of Our God’ (no not the One Sonic Society version) released on the 25th January, this time with both Michael and Peter at the helm. Their newly unveilved pseudonym Newsboys UNITED was credited for the release of this track, and their full length album of brand new songs, with the inclusion of Peter and Phil as well, is slated to release sometime in May 2019. So…it’s all happening. Peter is coming back. And Phil. And while we don’t know if it’s for this new album and then that’s it, or something more concrete, we as fans of the band can and should take whatever reunion there is!

‘The Greatness Of Our God’, the song, is something out of the era of Adoration/Devotion/Thrive, and that’s ok. It is nostalgia but also a new thing. It is unique and different, and maybe at times uncertain how to navigate with two lead singers, but with the release of this song, we are reminded that often, it works. We don’t know how the dynamics of the band are going to be moving forward, but if the new song is any indication how this new album is going to be, then we’re in for a great thing. The song itself is a reminder of God’s greatness and though some, if not most, of the lyrics can sound cliché, the passion and enthusiasm of Peter’s voice, and the nostalgia that Phil and Peter bring, should and ought to be impetus for us to listen to the song, at least once. Many bands come and go, and many have many incarnations. Newsboys 3.0 (with the inclusion of both Peter Furler and Phil Joel) may be just for this album, or it could be a longer partnership. Whatever the case, we all welcome Peter back with open arms, as we watch and see what he does best, create music in a similar vein to ‘Shine’, ‘Breakfast’, ‘I Am Free’, ‘Wherever We Go’, ‘Devotion’ and ‘Joy’, to name a few. And as we add ‘Greatness of Our God’ to the list of celebrated songs of 2019 (I’m already anticipating this song to make my list of my favourite songs of 2019!), Peter and Phil have added what I call anticipation and longing- never before have I ever been excited about a new project from any artist, the last being that of Carman’s comeback album way back in 2014. Love the new single guys, here’s hoping the new album is as good, if not better, than what this single stands for and reminds us all of God’s greatness, something we all ought to be reminded of, sometimes on a daily basis!