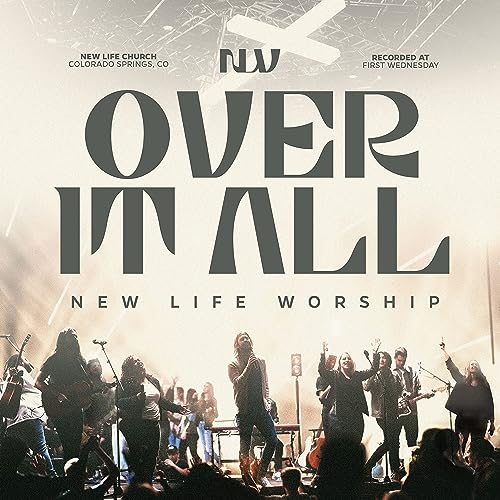 New Life Worship– Over It All (Live) (Amazon mp3/iTunes)

Way back in 2013, when I reviewed worship group New Life Worship’s album Strong God for the now defunct website Christian Music Zine; I was hesitant to review the album when I heard of the project being made. And this was because I hadn’t listened to any of their discography before. Despite the band being based in Colorado, to me it seemed to be another carbon copy of worship movements such as Bethel Music, Jesus Culture, Passion and Hillsong (all formats!), from snippets I heard from previous albums. Yet the album Strong God gave me much to praise the worship leaders for, and plenty of reasons for me to change my mind and preconceptions about them, as it’s the first time I’ve heard a bunch of their songs from start to finish. In truth, I only originally was curious in reviewing this album due to the presence of worship leader Jon Egan (former lead singer of Desperation Band) singing on a few tracks. But 12 tracks and 60 minutes later, I’m in awe, and very happy I took a chance on what was one of my favourite worship albums of that particular year. Though I ‘bit the bullet’ at first because of Jon Egan’s offerings, at the time there were other artists that I was going to delve deeper into and explore, because of Strong God, including Cory Asbury, Abby Merkel, Brad Parsley and Rachael Keihne. And as of 2013, I concluded that New Life Worship was nothing like the other worship movements (definitely a good thing), and I assumed and asserted that the popularity of this movement was going to rapidly increase in the future! Yet here we are in 2022. New Life Worship hasn’t exploded like I thought they would, and I sort of forgot about this worship group. Yet this year Over It All released… and I thought- why not? Enough time has passed for me for ‘forget’ about this band, so how about I treat this project like a debut release anyway? Jon Egan singing multiple songs on this project is a drawcard once again… so how does this worship release compare to the many others in the world today?

As with many other worship collective groups like Passion, Bethel Music and Hillsong Worship, different worship leaders take the reins on a few songs. In this case, Jon Egan is one of the worship leaders that really shine on the album, with 3 songs being led by him (and another as a duet). Opening the album with “There Is A Savior”, Jon earnestly and passionately proclaiming a simple yet effective set of biblical truths. With the opener being a solid although not spectacular melody about Jesus saving us all from sin; we are met with a track that doesn’t stand out to me, however I am willing to give it more chances in the future. With Jon eloquently relaying that Jesus is our Saviour, thematically this melody sounds similar to “Jesus Saves” by Tim Hughes, and for me isn’t punchy nor distinct enough. On the other hand, “Our God Is Over All”, the quasi-title track, is another melody led by Jon, with the piano ballad being an emphatic declaration of God’s faithfulness and His sovereignty and authority, and a favourite melody of mine from this track list; while “How Good Is He” is probably the most poetic, vulnerable, impacting, and inspirational melody on the entire album. With the vibe of the track having a modern-day hymn atmosphere, Jon eloquently sings out God’s praises, and relays to us that ‘…Our Father in Heaven, the Light of Salvation, oh how good is He, the Breath of Almighty, before and behind me, oh how good is He…’. It is this song alone that is in the same ‘category’ as “Overcome”, “Here In Your Presence”, “Light Up The World” and “I Am Free” as one of the most powerful songs Jon has ever recorded (as part of New Life or as part of Desperation Band), and this song alone that allows me to look past any other inadequacies in this project. “If Ever (Holy)”, another favourite track of mine, is led by Jennifer Wilson and Jon, and is one of the purest worship songs I’ve heard in recent years; with Jon further asserting himself as one of the most thought-provoking songwriters and worship leaders of today… and this begs the question: why did Desperation Band stop?

The rest of Over It All features more stirring and profound worshipful tracks, from new and upcoming artists- each reminding us that God is sovereign, holy, and in control over everything. “Awaken The Anthem”, with Dee Wilson, is a simple worship song that declares that we should sing out Hallelujah, even in spite of our circumstances, situations and trials and suffering; while the piano prominent “Spirit Of God” has Micah Massey and Patrick Mayberry passionately and vibrantly praying to God, asking His Spirit and presence to fall on us, and for His love to invade our hearts. “Gloria Patri”, with Abby Burley, is just a sweet, magical and hard-hitting worship anthem, that just needs to be heard to be believed and experienced- Abby’s vocals shine bright here, as she emphatically relays to us ‘…glory to the Father, glory to the Son, glory to the Holy Spirit, as it was in the beginning, as it is right now and will be forever, world without end, amen…’; however the upbeat pop/rock worship melody “Everything That’s In Me” (led by Micah Massey) is underwhelming- I couldn’t ‘get into it’ at all, and I for one found the song rather forgettable. That’s just me though.

Aaron Keyes, famous for his hit song “Sovereign Over Us”, is featured here with “Abide”, a simple yet effective ballad that speaks about being still and asking Jesus to teach us to abide in Him (similar in theme to “Abide In Me” by Matt Maher, yet nonetheless still poignant); while the penultimate melody is “Be Exalted” with Katie Wilcoxson. Again, this ballad is solid, however it doesn’t really distinguish itself from other worship ballads from other artists. It’s a beautifully recorded melody, and speaks about Jesus Christ being exalted over all- yet this melody for me didn’t hit me as hard as a song like “Gloria Patri”. Over It All then ends with the rousing and declaratory worship anthem “Up From The Waters”. A song that essentially lays out the gospel in no uncertain terms, I reckon it’s fitting a worship album ends this way- Dee Wilson is earnest and passionate in laying out his faith; and he encourages us all to share our testimony as well, of God being present and faithful in our lives.

Definitely not a carbon copy of Hillsong or any other popular worship movement (in the best way possible), New Life Worship doesn’t reinvent the worship wheel. Nor is their album the greatest worship album of all time. However, it is still moving, inspiring and necessary for us all as believers to listen to a refreshing, revitalising album as this. I will still love my worship albums from Chris Tomlin, Phil Wickham, Matt Redman, Martin Smith, Meredith Andrews, Kari Jobe and others… but Over It All is surprisingly good and an album I would listen to again and again. It’s not memorable by any stretch of the imagination… but I reckon worship albums don’t have to be. So why don’t you all listen to this album on Spotify? You won’t regret it! Now, I’m off to take a look at New Life Worship’s previous albums!

3 songs to listen to: Our God Is Over All, Gloria Patri, If Ever (Holy)