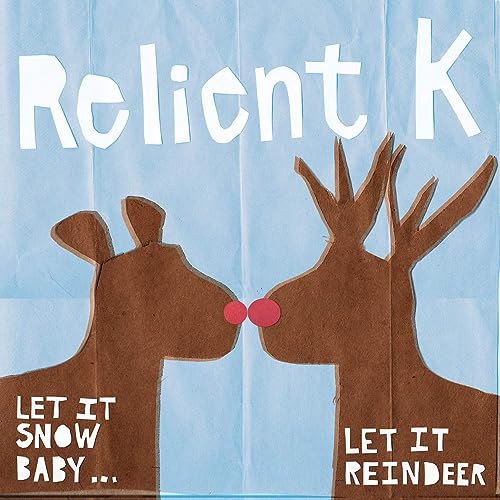 Let it Snow Baby…Let It Reindeer

Initial thoughts: I was never much of a Relient K fan back in the day. I’d hear songs like ‘Forgiven’, ‘Be My Escape’, ‘Must’ve Done Something Right’, and ‘Who I Am Hates Who I’ve Been’ on the radio, but I didn’t really get into the band that much. And so for them to release a Christmas album…well, I was intrigued to say the least. And what resulted from me listening to it? Well…nothing much really. Yes, the songs are good. Yes the songs are pop-punk. Yes, the album has obscure songs like ‘Handel’s Messiah’, ‘Good King Wenceslas’ and ‘Auld Lang Syne’ to name a few. But all in all, the album didn’t have a big wow factor to it. So I’d say…only for Relient K enthusiasts. Otherwise just check it on Spotify and nothing else after that.

Reason to listen: Well…if you want to hear uniquely Christmas songs? If you want to hear ‘In Like a Lion’, their song originally put forward to be in the Soundtrack of The Chronicles of Narnia: the Lion the Witch and the Wardrobe in 2005, but was seemingly cut from the final track-listing? Other than that…only listen if you love pop-punk or rock-punk. Which is actually not me!

Reason to buy: Umm…none whatsoever? Yeah, I know this min-review hasn’t started on the right foot, but for me to say that you must buy this album…I can’t do it. I can say listen to it on Spotify and then check for yourself if you want to buy it or not…yeah, that’s what I’ll do. Listen to it on Spotify, and then you can buy it or you don’t have to…either way, this album  as it stands now, is quite possibly one of the most musically interesting Christmas albums released from 2005 onward.

Reason to skip: If you’re not really a fan of Relient K, if you don’t love Christmas music, if you’re not a fan of pop-punk…well, basically if you’re like me and couldn’t really resonate with the album as a whole. No seriously, skip it if you want, personally, I thought there wasn’t much new brought to the table in terms of anything sonically different. It just didn’t stand out for me. The whole album was a bit of a blur (not in a good way), and by the time I heard ‘Good King Wenceslas’, I literally couldn’t remember the melody of ‘Merry Christmas, Here’s to Many More’.

No of guest artists: none

Does it have heart?: I thinks so. I dunno if the songs are either sung with passion or with a whole lotta technique and screaming at times, but I do feel like some of these songs are just recorded with a bit of punk atmosphere that I myself can’t connect to as much. I mean, maybe there is heart there and I can’t recognise it and think it’s just manufactured enthusiasm. Who knows.

Does it have a Christmas-y atmosphere?: Not really. There’s a whole bunch of guitars. It feels more like a punk record with Christmas songs, than a Christmas album. Maybe it’s because there’s a lack of bells and whistles, shakers, things that make it seem like when you’re listening to this, you’re immediately transported to a place and time where Christmas memories abound.

Uniqueness?: It’s unique in that it covers a genre of punk music that isn’t that covered in the realms of Christmas (and Christian) music.

Christmas message: There’s songs about the birth of Christ in ‘Angels We Have Heard on High’, ‘Silent Night’ and ‘Away in a Manger’, but all in all, it’s a ‘secular’ holiday/obscure carol album, and if you just listen to this album and not know the backstory of Relient K as a band and their involvement in the Christian music industry, you’d automatically think that this album is by a mainstream band, than a Christian one.

Closing thoughts: Not really my cup of tea. There I said it. Yes, there will be some Relient K enthusiasts that will thoroughly enjoy this album. And fair enough, they probably should. But where I stand…I wouldn’t pick this album up and listen to it, let alone buy it. I’d cherry-pick a few songs here and there, but that’s about it.

3 songs to listen to: Merry Christmas, Here’s to Many More; In Like a Lion, I Hate Christmas Parties

Yes/no; why/why not?: No. Why not? Because I never really connected with Relient K in the first place, and me listening to this album felt more like a chore than anything else. Maybe this album will convert you into a Relient K enthusiast, but for me, I reckon it’ll take a few more years yet!