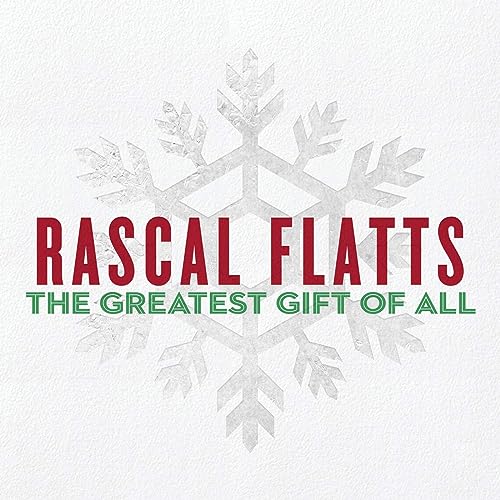 The Greatest Gift Of All

Initial thoughts: Like if Gaither Vocal Band travelled in Doc Brown’s Delorean to the 80’s and 70’s and began to create a Christmas album that sounds like the contemporaries of that time.

Reason to listen: Gary’s vocals are on point, there’s enthusiasm here, and this album more than brings out the faith exhibited by all three band members.

Reason to buy: To complete your Rascal Flatts collection. Other than that, I wouldn’t spend money on the hard copy, that’s for sure. The songs are alright, but nothing ground-breaking

Reason to skip: Unfortunately the tracks blend together after a while. “The First Noel” is nearly 5 minutes. More than half the songs, inclusive of the usually upbeat “Deck the Halls” and “Let It Snow” are laid back and lullaby-ish. 10 points for effort for the acapella “Hark The Herald Angels Sing” but howabout we leave that for Pentatonix to enhance, shall we?

No. of originals: 2 (although both originals aren’t originally recorded by Rascal Flatts, but rather by other artists- A Strange Way To Save The World by 4Him, and Someday At Christmas by Stevie Wonder)

No of guest artists: None. That’s a travesty don’t you reckon?

Does it have heart?: I mean, I guess Gary and co are enthusiastic. But there’s minimal joy and passion evident here, although “A Strange Way To Save The World” is the album highlight by a mile, as these guys record a brilliant version that sounds very much like their own!

Does it have a Christmas-y atmosphere?: Does Christmas atmosphere mean sounds like ‘recorded in Nashville in a church or in someone’s home’? Because that’s what comes to mind when I hear these songs!

Uniqueness?: Not unique in the slightest. You’ll definitely enjoy Chris Tomlin’s Glory In The Highest: Christmas Songs Of Worship much more!

Christmas message: We all knew that Rascal Flatts were believers, and this album confirms that with many songs about Jesus. There is a message here about his birth, but whether you think it’s a message executed well depends on how believable you reckon Rascal Flatts are at their delivery. I for one have heard better carols elsewhere.

Closing thoughts: It pains me to say that this isn’t their best effort! Their country songs are good, but for this holiday release, I’d say just listen to “A Strange Way To Save The World” and that’s it!

3 songs to listen to: A Strange Way to Save the World, Someday At Christmas, Joy To The World

Yes/no; why/why not?: Stream on Spotify when there’s nothing left to stream