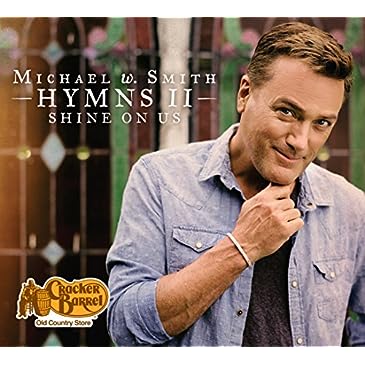 Don’t you think it’s time for another Michael W. Smith album? Prior to him releasing 3 albums in 2014 (Hymns, Sovereign and The Spirit Of Christmas), there was a 3 and a half year gap since the previous 2010 album Wonder. There were in fact times in 2011, 2012 and 2013 that Michael would retire soon, or maybe already did- but 2014 changed all of that for me, with Michael releasing three of his strongest albums to date. A press release in 20133 album Michael switching over from Reunion Records to Sparrow was a complete surprise- the news definitely came from left field, and in my opinion, Michael’s comeback is definitely as worthy as the hype is. Now that the dust has settled, and we can all immerse ourselves in the ‘new Smitty’ so to speak (these three albums in my opinion, have given the singer a brand new lease of life vocally and musically, and seem to be the start of an entire new chapter where the best is still to come for Michael); it’s time to treat ourselves to another album. Hymns II: Shine On Us recently released, and is another exclusive Cracker Barrel album, and Michael’s second project recording timeless classics.

Only available digitally on iTunes and Amazon, and sold physically exclusively at Cracker Barrel Old Country Stores; Michael’s renditions of the more unrecognisable songs such as “I’d Rather Have Jesus”, “Nearer My God To Thee” and “Down To The River To Pray”, and other hymn-like melodies (“Jesus Only Jesus”, “Untitled Hymn”) and original melodies (the title track, as well as “Great Is The Lord”) definitely have the power to soothe us, and draw us closer in our relationship with Jesus Christ. Not your average CCM/pop album (in contrast to the first hymns album which was very piano heavy; this new batch of songs is more epic and orchestral like), yet still very vintage MWS; this collection of 16 songs is able to excite any Michael W. Smith enthusiast, as well as fans of soundtracks or instrumental albums.

Unlike the Cracker Barrel acoustic album Deep Roots from Steven Curtis Chapman, or Michael’s first foray into hymns, this year’s Hymns is slightly more attune to what we have heard and known from CCM today. With many songs reminding me musical of MWS of old (80’s and 90’s!), we are overall across the whole 16 tracks, treated to Michael singing a well-known, or not so well-known hymn across simple piano notes, with great passion, and later on in these tracks, strings, acoustic guitar, electric guitars, drums and maybe a gospel choir or two in a few melodies- though this could be defined as musical sameness, but at least, it’s much more catchy than Hymns I which in my opinion is only as engaging and moving because of Smitty’s powerful vocals. Here, Smitty modernises the music a bit, and it’s clear that in these iterations of popular and obscure melodies, that Michael is having a ball- and sometimes listening to musically simplistic melodies means the lyrics and the meaning stands out a bit more. I know that’s certainly the case for me with Michael’s music!

Glancing through the track list, the difference between this and the first hymns album are that there are more melodies I do not recognise, yet a few that do seem familiar. “His Eye Is On The Sparrow” opens up with a vibrant piano riff, as we enter into a jazz/gospel anthem- something Carman would record. As Michael emphatically proclaims that ‘…Jesus is my portion, my constant friend is He, cause His eye is on the sparrow, and I know He watches me…’, this cheerful melody is a declaration that we can sing with freedom, because just as Jesus takes care of the sparrows, how much more does His love and devotion extend to His own children? Album opener “Down To The River To Pray” is an acoustic guitar and banjo driven country and reggae inspired bundle of joy and happiness as Michael encourages us to pray to God whenever we have the chance (a theme similar to Jordan Feliz’s “The River”), while the 2 and a half southern gospel strings prominent “I’ll Fly Away” is a low point on the album- particularly because the song is short and ends as soon as I am becoming immersed into the song!

The piano led “I Need Thee Every Hour” is a song I haven’t heard before, yet the chorus sounds quite familiar thematically (think Matt Maher’s “Lord I Need You”), and is one of the few songs on Hymns II that seems to be musically traditional, like most of the songs on the first hymns album (although as the song progresses, there is indeed an epic gospel choir that gives the song new life and extra depth across stirring piano!); and “Be Still My Soul” is another unfamiliar track- I’ve heard this melody once sung by Kari Jobe, and Michael delivers a brilliant and worthy rendition, complete with heavenly choirs and a sweeping and epic piano crescendo that screams out vintage Smitty. However, the completely foreign “O Sacred Head, Now Wounded” is a track I couldn’t really comprehend, as this is a melody that Michael only starts singing at the start of the 4th minute- and the rest of the song is led by the choir, with a lot of ‘thees’ and ‘thys’ present in the song. Though what I could grasp from the melody is that Michael is vividly describing Jesus’ death, something we need to fully understand before we can fully live in the freedom that Jesus has saved us.

The beauty of hymns in general are that their music as well as lyrics are simple and easy to grasp and understand- and with Hymns II: Shine On Us, Michael conveys and highlights themes applicable to everyone. In the piano ballad “I’d Rather Have Jesus”, Michael skilfully outlines how he’d rather have Jesus than ‘…silver or gold, I’d rather be His than have riches untold, I’d rather have Jesus than houses or land, yes, I’d rather be led by His nail-pierced hand…’, while the choir and an organ are both present in the somewhat familiar “A Mighty Fortress Is Our God” (similar in theme to Christy Nockels’ “A Mighty Fortress”!), as the song presents to us the fact that Jesus is our mighty fortress, and our refuge, home, strength and our everything- so we can rely on Him at all times.

While “Nearer To My God To Thee” (featuring quite a lot of repition!) contains haunting and mysterious strings and violin to draw us in, as well as guest vocal Susan Ashton, and has Michael ardently reminding us that to be near to God is where he wants to be, even if the circumstances and situations are unfavourable to us like Job; it is the final ‘hymn’ “Turn Your Eyes Upon Jesus” featuring Audrey Assad that is one of my favourite hymns on the album, and one of my favourite hymns of all time. Though I still prefer Newsboys version of the hit song (with the added verses of “Where You Belong”- both John James’ and Michael Tait’s versions!), both Michael and Audrey complement each other vocally, each reminding us of how even looking upon  the face of Jesus, or even pondering that fact, should bring us awe and wonder, as ‘…the things of earth will grow strangely dim, in the light of His glory and grace…’, highlighting that everything fades but Jesus- it’s a sober reminder as we ponder over where our priorities lie.

The remainder 6 songs, though not official hymns, are somewhat hymn like, and may grow to hymn status in 10, 20, 30, 50 plus years or so. The order of the album is quite clever to, as these 6 evidently more modern melodies are scattered around the album, making for a more cohesive and contemporary musical experience. By far, the most recognisable song here is Matt Redman’s worship anthem “Jesus, Only Jesus”, a mid-tempo ballad and a 4 minute tune of unbridled and unashamed worship, with a backdrop of captivating keys and brilliantly played synth. A space where we can unashamedly cry out that Jesus is worthy of our praise and that He is the One who we can call on at all times, we are reminded that Jesus is our everything, and also reminded how great a worshipper Michael is. In my opinion, his version easily tops Matt’s original version, as well as covers from Phillips Craig And Dean and Travis Cottrell. The other covers present are “I Don’t Know Why” (Andrae Crouch) and “Untitled Hymn” (Chris Rice), with the former being an out-and-out gospel melody surrounded by brass instruments, synth and an enthusiastic gospel choir, which marvels at the love Jesus has for us, and tells the story of the gospel; and the latter an acoustic guitar reflective and contemplative ballad, which imparts to us that we can come to Jesus, and place all of our worries and troubles at His feet, with no judgement, at any time of the day or night.

Michael also includes the reworked and redone “Great Is The Lord” (originally recorded in 1983!)- and in my opinion, this updated version of a fan favourite definitely works here, complete with a choir and orchestral instruments; while the title track was written by Smitty exclusively for this album- a piano led potential single and sure hit and hymn in the making- as Michael emphatically asks God to shine on us ‘…that we may be saved, that we may have life, to find our way in the darkest night, let Your light shine on us…’. And with the rounding up of the 16 track mega-track listing with the patriotic “America the Beautiful”, which could also be seen and interpreted as God singing the song over America; Hymns II: Shine On Us is an album that I will definitely keep on my iTunes playlist for a while yet, as I anxiously wait the next full length Michael W. Smith project of all original songs!

Michael W. Smith has given us some special hymns in last instalment, and in this new instalment he continues to provide us with some old and new fan favourites. Though some tracks I would have loved to see, such as “Amazing Grace”, “Blessed Assurance”, “Holy, Holy, Holy”, “The Solid Rock”, “Fairest Lord Jesus”, “In Christ Alone”, “Doxology” and “Be Thou, My Vision” (or how about his full band rendition of “All Hail The Power Of Jesus Name”, from the 2013 compilation album Jesus Firm Foundation being included as a bonus track?); the track list is solid and is thoroughly enjoyable. So what’s my verdict? Does Smitty’s second hymns album stack up to the first? Well, the veteran artist of 30+ years shows us why he is still one of the best artists in the CCM industry, with the lyrics that make this Hymns album special; and the heart for Jesus that Michael brings, along with some exquisite piano playing and string arrangements.

As Michael prepares for his next album in the coming months, one could almost bypass his hymns projects as simply a side project just cobbled together with only a half hearted attempt. Yet this album is so much more than that, and in its own right, Hymns II: Shine On Us shows some of the most popular and underrated hymns, sung in true ‘Smitty’ style. Though the album is only released physically in Cracker Barrel (and digitally everywhere else!); Michael has delivered a solid, worthy follow-up hymns album, and one which I will gladly listen to again when I’m in need of hearing some inspiration and encouragement. Well done Michael W. Smith, these songs have been recorded to perfection!

5 songs to listen to: Jesus Only Jesus, Untitled Hymn, Shine On Us, Great Is The Lord, Turn Your Eyes

One thought on “Michael W. Smith – Hymns II: Shine On Us”