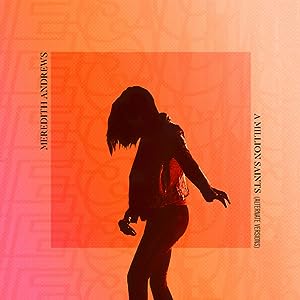 One of my favourite worship artists ever, alongside others like Chris Tomlin, Tim Hughes, Paul Baloche and Christy Nockels; Meredith Andrews has continued to deliver albums that speak to the soul and impact listeners throughout her more-than 10 year career at Word Label Group. Since bursting onto the scene in 2008 with her chart-topping song ‘You’re Not Alone’ and her subsequent album The Invitation, this Wilson, North Carolina native has unveiled to us songs over the years that have impacted us all as we are ushered in a mindset of worship that is not conditional on how we feel, but on what the word of God says Christ is to us, at every waking moment. Songs like “Can Anybody Hear Me?”, “Worth it All”, “Not For a Moment”, “Pieces”, “How Great is The Love”, “Spirit of the Living God”, “Soar” and “Strong God” (to name a few) have been challenging and heartfelt, to me at least. Full of lyrical richness and raw honesty that hasn’t really been felt that much in terms of female-fronted worship albums for a while (only recently with the surge in popularity of female-fronted worship artists- Steffany Gretzinger, Amanda Cook, Kristine DiMarco, Hannah Kerr, Hope Darst, For All Seasons and Elle Limebear, to name a few); Meredith’s passionate vocal and her distinct and trademark voice alone ought to be enough for anyone to listen to any album’s from Meredith, at least only once. And upon the heels of her highly anticipated live EP that released in March 2019, titled Faith And Wonder (Live), Faith and Wonder (Alternate Versions) EP was unveiled in August 2019- to much questioning by myself in terms of whether that release was even necessary- 5 versions of the song at a price that is often higher than any other EP of brand new songs by any artist…you get the picture right? Nevertheless, here we are again in May 2020, and last week at the end of April, we saw 5 alternate versions of ‘A Million Saints’ be unveiled to us in a 5 track EP- the live version, the acoustic version, the instrumental version, a Spanish version and a Orchestral version.

Faith and Wonder (Alternate Versions) EP was unveiled in August 2019, and I wrote a not-so-positive review of the EP, linked here. Frankly, a similar thing can be said about this new EP as well. But in all honesty, the song itself is good. Great even. ‘A Million Saints’, though radio-esque, is still a good song and a reminder that we are indeed worshipping the Lord alongside people of the past, present and future, the saints as we fall down and declare God’s holiness as a unified church before our Father. As I have said in the previous review about the additional songs for ‘Faith and Wonder’ (Orchestral, Instrumental and Spanish Editions), I can also say it here- frankly, the song is covered way too much on this 5 track album- and, if the song is covered a lot, it has to be real good, and I mean, ‘Oceans’ or ‘So Will I’ good (the other two songs, both by Hillsong UNITED, that have been re-recorded plenty-a-time and placed on an EP- Oceans EP and So Will I EP). Alas, ‘A Million Saints’ is a nice song by Meredith, but unfortunately, the song doesn’t really hold up when compared to other previous melodies by Meredith- songs like ‘Can Anybody Hear Me’, ‘You’re Not Alone’ and ‘Not For A Moment (After All)’, to name a few. I like the song, I really do, but to release such an album as this and to price it at $8.99 (when Faith and Wonder [Live] is $6.99- with 6 original songs instead of 5 songs of the same name on A Million Saints (Alternate Versions)) seems a little redundant. The only saving grace for this EP is the duet between Meredith Andrews and Blanca on the Spanish version of the song, and even that rendition of it still can’t save the EP from the unfornate review which this is.

Regardless of my thoughts for this EP, I still attest to this- Meredith is one of the best female worship leaders out there (alongside Amanda Cook, Kari Jobe, Christy Nockels, to name a few), and maybe, just maybe, the release of alternative versions of ‘A Million Saints’ can maybe encourage people to give the live EP itself a second chance. But will I encourage people to go out of their way and purchase the songs on iTunes or Apple Music? Probably not. I guess just listen on Spotify or youtube if you love alternate arrangements of the same song over and over and over again. Nevertheless, here’s hoping that alterative versions of ‘Faith and Wonder’ (last year) and ‘A Million Saints’ (this year) do not give rise to alternative versions of other songs on Faith and Wonder (Live), because I guess the reviews of those ones, if they ever come to fruition, will probably be the same as this one. Regardless, alternative versions are great, but for me as a reviewer and as a listener of music, I want something unique, fresh and different. Here’s hoping there’s something like that in the upcoming months ahead. Maybe another full length album from Meredith at a later date? Well done Meredith for the Spanish version of ‘A Million Saints’- here’s hoping there are better and smarter marketing and executive decisions moving forward- maybe, just maybe, alternative versions need not to be released separately compared to the original versions of the songs, maybe just a standard edition and a deluxe edition should surfice?